When ‘Emperors’ Preach Woke Investments, Much Can Go Wrong for Rest of Us 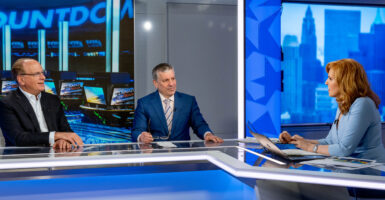 It's not for BlackRock CEO Larry Fink to decide whether a large oil company should reduce its investments in oil and gas that others rely on to survive. Pictured: Fink, left, appears March 9 with Fox Business correspondent Charlie Gasparino and anchor Liz Claman on "The Claman Countdown" in New York City. (Photo: Roy Rochlin/Getty Images).

The misappropriation of the economic freedom of millions of mom-and-pop investors by BlackRock Inc. CEO Larry Fink has unintended consequences.

“We have a new bunch of emperors, and they’re the people who vote the shares in the index funds,” Charlie Munger, business partner of philanthropist Warren Buffett and a big proponent of index fund investing, recently said.

“I think the world of Larry Fink, but I’m not sure I want him to be my emperor,” Munger said.

Fink is powerful. He has benefited perhaps more than anyone else from the prevalence of index fund investing. He also is a big proponent of what is called Environmental, Social, Governance investing, or ESG.

Here’s how it works: Millions of investors buy a BlackRock index fund because they basically want to own the stock index. Instead of being owners of one company or a few companies, when they buy the iShares S&P 500 Index Fund, for example, they own a fraction of every single stock in the S&P 500, in the same percentage in the stock index at the time they buy.

When millions of people buy trillions of dollars of BlackRock’s index funds, the company ends up holding in its accounts an equivalent amount of every stock in the stock index. This is called passive investing, as opposed to active investing, because no one is picking certain stocks as investments on which to earn a gain; instead, investors are simply buying or selling every stock in an index.

As of Dec. 31, 2021, BlackRock held an amount equal to over 28% of the U.S. gross domestic product in passive investments in the company’s accounts for its index fund holders.

Nothing is wrong with index funds. Investments in index funds mimic the returns of the overall stock market because by acquiring an index fund, one owns a tiny fraction of every company in a stock index, such as the S&P 500, or the MSCI World Index of global stocks.

A problem exists, however, with Fink, who votes the stock holdings in BlackRock’s index funds at shareholder meetings as if he is the investor who owns many trillions of dollars of stocks—which he is not.

As of Dec. 31, according to BlackRock’s annual report, Fink, through his company’s index funds, was voting the shares of $6.45 trillion in stock.

Talking heads on television and in the financial press, along with finance professors in colleges and universities, long have preached the merits of index fund investing based on a theory called the efficient-market hypothesis. That theory says that the value of a stock at a given time is closely reflected in its current stock price, making it unfeasible for someone to consistently beat the stock market index by picking individual stocks.

The efficient-market hypothesis is true for the average investor. The success of Wall Street titans such as Buffett and Carl Icahn disproves it as the one-size-fits-all, best option for everyone, as does the success of an untold number of anonymous investors who have made large fortunes but aren’t included in the research findings on the returns of mutual funds.  But that is beside the point.

is known for pushing for something called stakeholder capitalism (which I’ve criticized)—a squishy concept in which corporations look to better the human race as opposed to churning out profits for shareholders. And his embrace of some woke policies through the investment fad known as ESG (Environmental, Social, Governance) standards.

In its 2020 annual report, BlackRock states:

We invest our clients’ money in companies of all types and sizes, in every region of the world. These investments provide capital for companies to grow and create jobs, which, in turn, enables economies and societies to prosper. We use our voice as shareholders to urge companies to focus on important issues that will also impact the value of their investments, like climate change, the fair treatment of workers and equality. We are also working through the BlackRock Foundation to expand financial security for low income groups who face barriers to economic participation and may be vulnerable to disruption from climate change.

That focus on climate change is why BlackRock, as ExxonMobil’s second-biggest shareholder, sided with a group of shareholders who owned just 0.02% of ExxonMobil in voting to replace board members with new ones who believe that:

ExxonMobil’s lack of any serious diversification efforts and aggressive spending predicated on heavy long-term oil and gas demand for decades to come, risks massive continued long-term value destruction in a world intent on reducing all emissions …

Is it really for Fink, commanding the votes of millions of shares purchased by other investors, to decide whether a large oil company should reduce its investments in oil and gas that people rely on to survive?

What a bully tactic by a bully who is voting his agenda with billions of dollars of shareholders’ voting rights purchased by others who bought Fink’s index funds. They did so to earn a return on their investment portfolio equal to that of the overall stock market, not so that Fink could pretend he was them at shareholders meetings of virtually every company in the world and vote their shares.

Such interference by Fink and other index fund company chief executives because they presume to know what is good for the planet can have unintended and drastic consequences.

Right now, the average cost of gasoline is spiraling upward. And big oil and gas companies have not been investing in new exploration in recent years, partly because Fink, other ESG advocates, and now President Joe Biden’s administration have been lurking over their shoulders and stigmatizing the fuel we all need to drive our cars and heat our homes.

These players have created a large deal of uncertainty about what the future will be for energy exploration and drilling. In the case of Biden, he put huge restrictions on oil and gas drilling on his first day in office and also canceled the Keystone XL pipeline.

BlackRock’s claim in its annual report that “low income groups . . . may be vulnerable to disruption from climate change” is not worth the paper it is printed on. High gasoline prices hurt the poor the most, and those in cold climates sometimes freeze to death if they cannot live in heated homes, as happened recently in Ukraine.

There is nothing wrong with index funds. Larry Fink is not millions of people who hold index funds, though. Their interests vary widely and are not somehow lined up together, much less with his interests.

Fink and the CEOs at other companies that sell index funds shouldn’t vote trillions of dollars of index fund shareholdings at every meeting of shareholders in the world. They should save the planet in some other way.