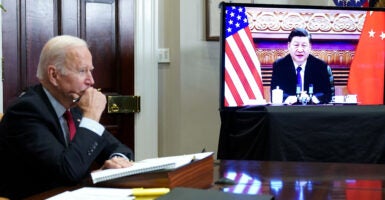 A consumer group has warned a bipartisan group of governors against investing state pension funds in BlackRock, one of the world’s largest money management corporations, because of its close links to China.

Consumers’ Research sent a letter Thursday to the governors of the top 10 states investing public pension funds in BlackRock. The letter refers to the group’s four-page “consumer warning” detailing BlackRock’s ties to China-based companies involved in surveillance and associated with the Chinese Communist Party.

“We urge elected officials to do their due diligence in educating themselves and their staff on the multiple risks posed by BlackRock’s extensive investments in Chinese companies, both from an ethical standpoint as well as the fiduciary responsibility owed to U.S. pension holders and retirees,” William Hild, executive director of Consumers’ Research, says in the letter to the 10 governors.

“As the leader of a state whose pension funds are among the top 10 most extensively invested in BlackRock, we invite you to examine our report and conduct any necessary efforts to learn more about the risks to the assets of your state’s public employees,” the letter to each governor says.

Washington state invests $13 billion of state pension funds into BlackRock, according to the Consumers’ Research notice, followed by Florida with $10 billion.

Next are New York, which has invested $9.8 billion in pension funds in BlackRock; Nevada with $9.7 billion; Nebraska with $9.4 billion; and South Carolina with $9.3 billion.

Rounding out the top 10 states are Oklahoma, which has invested  $5.8 billion in pension funds in BlackRock; Pennsylvania with $3.5 billion; Montana with $2.9 billion and West Virginia with $2.1 billion.

>>> Related: 4 Things to Know About Politically Connected, Activist BlackRock and Its China Investments

The letter to the 10 governors from Consumers’ Research notes that the U.S.-China Economic and Security Review Commission last month released an annual report to Congress that warned about national security risks arising from U.S. financial dealings with China.

“Still, BlackRock has maintained a bullish approach to investing billions in Chinese firms, supporting their economy, and helping fuel the rise of their military, which barely a month ago tested a hypersonic missile,” Hild wrote to the governors, adding:

Investment in Chinese companies could also make U.S. investors unwitting accomplices in the expansion of the [Chinese Communist Party’s] surveillance and intelligence gathering apparatus, or worse yet, make them party to human rights abuses like the ongoing genocide against Uyghurs in Xinjiang, China.

The letter asserts that “BlackRock’s unabashed gusto for Chinese markets” ignores concerns about the communist regime’s “ambitions to supplant the U.S. as the preeminent world power.”

Consumers’ Research plans to run state-specific digital ads as a follow-up to a multimillion-dollar ad campaign that included TV spots during the World Series earlier this year.

As an asset management company, BlackRock has an obligation to manage investments consistent with clients’ objectives and choices, a spokesperson told The Daily Signal in a written statement late Friday.

“China and the U.S. have a large and interconnected economic relationship. We recognize that our stakeholders have differing views on China —BlackRock takes those concerns seriously,” BlackRock’s statement says. “We seek to balance the concerns of our stakeholders with our role as a global investor and fiduciary working for our clients as we navigate this very complicated relationship between the U.S. and China. Our approach to Chinese-related investments is consistent with US foreign policy.”

BlackRock supports our clients in making informed investment decisions by providing clear and current disclosure of all material risks associated with different investment products and markets.

As China’s financial services industry matures, a more robust regulatory and legal framework will be essential to building even more trust and confidence [among] global investors and Chinese savers. BlackRock is committed to continually pushing for improved standards, governance, and accounting transparency from all companies and countries wherever they are operating in the world. Our approach to China will be no different.

Hikvision has advertised itself as the world’s largest manufacturer of video surveillance technology; iFlytek is a voice recognition and artificial intelligence company.

George Soros, a billionaire who supports left-wing causes, wrote in an op-ed in Financial Times that Chinese companies made up one-third of BlackRock’s environment, social, and governance, or ESG, investments.