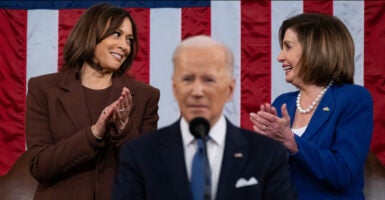 Vladimir Lenin supposedly stated that his preferred foreign policy strategy was to “probe with bayonets: If you find mush, you push. If you find steel, you withdraw.” Russian President Vladimir Putin follows the same strategy.

This week, as his forces shell Kyiv and batter Kharkiv, Putin has been upping the ante. He has unleashed strikes against Ukrainian targets near the Polish border, tacitly threatening to attack a NATO member. He continues to leverage his natural gas and oil supply to hold Europe hostage. His foreign policy apparatus continues to threaten the possibility of wider war should the West send in further armaments, including MiGs sufficient to repel the Russian invasion. He has reached out to China for support. And he has utilized America’s overweening desire for some sort of Iranian nuclear deal to press for American concessions on evading sanctions.

All of Putin’s pressure has met with mixed response. The West has continued shipments of certain types of materiel, including Javelin and Stinger missiles. But this week, the Biden administration signaled first that it would allow shipment of MiGs to Ukraine, then backed off, claiming that such shipments might amount to escalation.

Meanwhile, the West’s economic sanctions are being maintained—but Russia announced this week that the United States had made written concessions that would exempt Russia’s ability to trade with Iran, despite Iran firing missiles at a U.S. consulate in Erbil, Iraq.

What’s the chief message from all of this waffling? That the West’s threats are, at best, sporadically credible. Russia believes that if it ramps up the pressure harshly enough on Ukraine and threatens the West enough with nuclear war, it will be able to pry out of Ukraine diplomatically what it has been unable to pry out of Ukraine militarily—and Russia may well succeed. After all, Germans can’t continue to pay $8.25 per gallon for gas forever.

At the same time, China, which has been playing both sides against the middle, is watching. China has been offering itself out as a “neutral mediator” between Russia and the West, despite the fact that China is an out-and-out Putin ally.

China has been buying up troubled Russian assets at bargain-basement prices, strengthening both its connections with Russia and its portfolio—and meanwhile, China has received little credible threat of blowback from the West, which does not want to exacerbate inflationary problems by intensifying supply chain issues.

As The New York Times reported, “a consensus is forming in Chinese policy circles that one country stands to emerge victorious from the turmoil: China.” Investors are beginning to worry about the possibility of a Chinese invasion of Taiwan.

Nonaligned countries are increasingly skittish about Western promises. It is no coincidence that as Team Biden reaches out to Iran via Russia, Saudi Arabia has declined to take Biden’s phone calls and instead reached out to China. It is no wonder that India, which buys exorbitant amounts of weaponry from Russia to counter China and Pakistan, has refused to denounce Russia. When the West wavers, it becomes a bad bet.

Western deterrence already failed in Ukraine. If the West fails to reestablish deterrence in the next phase of global geopolitics, the results will be even more dire, and the realignment currently playing out will only accelerate—to the detriment of the U.S. and her allies.