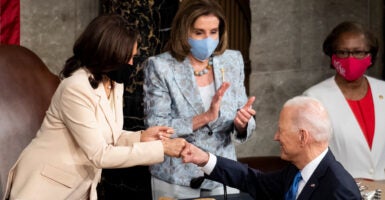 During the State of the Union, President Joe Biden needs to address American energy independence, rising inflation, the crisis at the southern border, and our standing on the world stage, Rep. Byron Donalds said. Pictured: Biden fist bumps Vice President Kamala Harris, and Speaker of the House Nancy Pelosi, D-Calif., claps at the end of his address to the joint session of Congress in the House chamber of the U.S. Capitol on April 28, 2021. (Photo: Caroline Brehman/Pool/Getty Images)

The nation, and the world, will be watching President Joe Biden Tuesday night as he delivers his first State of the Union address.

The Daily Signal spoke with members of Congress on Capitol Hill Monday about the issues the president should address, and their expectations for the speech. Here’s what they had to say:

“I think he’s going to ignore the problems instead of facing them head-on,” Rep. Andy Biggs, R-Ariz., said of Biden ahead of the State of the Union address.

Biggs added that he suspects there will be a noticeable difference between the way Democrats responded to former President Donald Trump’s State of the Union speeches and how they react to Biden’s address Tuesday night.

2. Rep. Byron Donalds Is Expecting ‘More of the Same’ From Biden

During the State of the Union, Biden needs to address American energy independence, rising inflation, the crisis at the southern border, and our standing on the world stage, Rep. Byron Donalds, R-Fla., said.

3. ‘I Hope We Get a Little Bit of Intellectual Honesty’ From Biden, Rep. Mike Waltz Says

“What I hope to hear from Biden [during the State of the Union] is, ‘[Ukrainian President Volodymyr] Zelenskyy, we have your back, Ukrainian people, we have your back, and we are going to accelerate the military hardware that you need to resist, and eventually defeat, this Russian invasion,’” Waltz said.

Biden must address the crisis at the southern border and the “over 100,000 fentanyl deaths,” Rep. Tony Gonzales, R-Texas, said.

Rep. Darrell Issa, R-Calif., says Biden should apologize to the people of Ukraine, the people of Afghanistan, and the American people for his failed leadership.