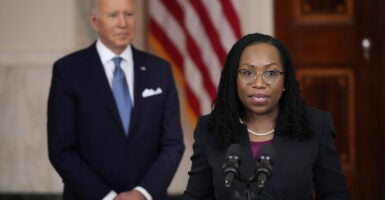 D.C. Circuit Judge Ketanji Brown Jackson, President Joe Biden’s nominee for the Supreme Court, was among the names on a shortlist from Demand Justice, a liberal legal organization seeded with funding by mega-donor group Arabella Advisors.

Demand Justice pushed Biden to choose someone from its Supreme Court list during the 2020 campaign. It heralded Jackson as a jurist who has “stood up for the rule of law, holding the Trump administration accountable for its rule-breaking.”

And it credited Jackson for writing that “presidents are not kings” and that “no one is above the law.”

“With the intended nomination of Ketanji Brown Jackson, Joe Biden has made it clear that his top priority is paying back the left-wing dark money network that spent over one billion dollars to help elect him and Senate Democrats,” Carrie Severino, president of the Judicial Crisis Network, a conservative legal group, tweeted.

If confirmed by the Senate, Jackson, 51, will replace retiring Justice Stephen Breyer, for whom she clerked before becoming a public defender and later vice chairwoman of the U.S. Sentencing Commission.

In 2013, President Barack Obama appointed Jackson as a U.S. district judge for the District of Columbia. Last year, Biden appointed her to the U.S. Court of Appeals for the D.C. Circuit.

In announcing his pick Friday, Biden called Jackson “one of our nation’s brightest legal minds” and said she “will be an exceptional justice.”

Demand Justice started in 2018 under the fiscal sponsorship of Arabella’s nonprofit Sixteen Thirty Fund before it spun off to become an independent organization.

“President Biden will reportedly nominate Judge Ketanji Brown Jackson to be the first ever Black woman and first ever former public defender on the Supreme Court,” Demand Justice tweeted Friday. “Jackson would bring more experience as a trial court judge than any sitting Supreme Court justice.”

Jackson frequently was talked about  in media reports as the likely frontrunner in Biden’s considerations for the high court.

Significant chatter, though, centered on U.S. District Judge Michelle Childs of South Carolina, who had the backing of Sen. Lindsey Graham, R-S.C., the top Republican on the Senate Judiciary Committee. Childs also had the support of House Majority Whip Jim Clyburn, D-S.C., who pushed Biden to promise, as a 2020 presidential candidate, to name the first black female justice.

However, Childs was not on Demand Justice’s shortlist for the Supreme Court.

“If media reports are accurate, and Judge Jackson has been chosen as the Supreme Court nominee to replace Justice Breyer, it means the radical Left has won President Biden over yet again,” Graham tweeted Friday. “The attacks by the Left on Judge Childs from South Carolina apparently worked.”

Graham’s tweet is especially notable because in June 2021, the Senate confirmed Jackson to the D.C. Circuit Court of Appeals by a vote of 53-44. Graham, along with fellow Republicans Susan Collins of Maine and Lisa Murkowski of Alaska, joined Democrats for the vote.

Biden failed in his first appointment to the high court, Heritage Foundation President Kevin Roberts said after the news broke.

“Ketanji Brown Jackson is the most radical judge ever nominated for a seat on the Supreme Court,” Roberts said in a public statement.  “A review of her record and judicial philosophy reveals a deeply troubling pattern and raises questions about her ability to be a fair and impartial judge.”

Her limited judicial record reveals that Jackson has consistently ignored the Constitution, twisting the law to favor certain outcomes. Judges should play a limited role in our government, yet Jackson’s far-left supporters want her to impose a political agenda that invents new rights or erases rights she doesn’t like.

Based on the information we already know, senators should reject her for this lifetime appointment.

As The Daily Signal previously reported, Demand Justice founding member Paige Herwig is part of the White House legal team that was involved in selecting the next Supreme Court justice.

“Recently, the Arabella Advisors network has been increasingly vocal about the fact that Jackson was their preferred nominee—the one they are sure will rubber-stamp their left-wing political agendas from the bench. Today, Joe Biden is delivering exactly who they demanded,” the Judicial Crisis Network’s Severino said in a tweet thread.

The initial Trump shortlist had 11 names and later grew to 21. That’s closer to being short than Demand Justice’s list of 47 people.

In a tweet, Senate Majority Leader Charles Schumer, D-N.Y. enthused that Jackson is “an excellent choice to be the next Supreme Court Justice!”

Sen. Josh Hawley, R-Mo., a member of the Judiciary Committee who voted against Jackson’s D.C. Circuit nomination, said only that he looks forward to meeting with the judge, noting he has concerns.

“Now that President Biden has made his choice for the Supreme Court, I look forward to meeting with Judge Jackson one on one, and to the Judiciary Committee hearings to follow,” Hawley said in a public statement, adding:

When Judge Jackson appeared last year before the Judiciary Committee, I was troubled by aspects of her record, including her record on crime and criminal justice. I will be thoroughly reviewing Judge Jackson’s record from top to bottom and look forward to speaking with her.

Two years ago, as a candidate for president in the Democratic primaries, Biden promised to appoint the first black woman to the Supreme Court.

If confirmed, Jackson also will become the third black justice and the sixth female justice in American history.

“Judge Jackson is a hand-picked selection from far-left groups like Demand Justice, who fully expect her to rule according to their progressive judicial philosophy rather than uphold the Constitution,” Anderson said in a written statement. “During her tenure on the D.C. Court of Appeals, she has assembled a judicial record that prioritizes the abortion industry and illegal immigration interest groups ahead of a faithful interpretation of the law.”

Conservatives should use the confirmation process to expose the disastrous effect of liberal judges on the nation. For decades, the left-wing judicial activism machine has installed judges who are out of touch with the American people and who disregard the meaning of the Constitution and precedent in favor of special interests and their personal political leanings.