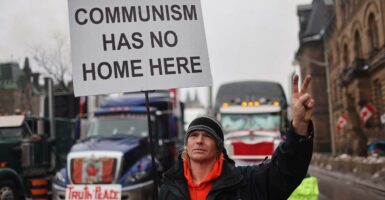 Instead of balking at the harassment of private Canadian trucker donors whose information got leaked, liberal media insinuate they had it coming. Pictured: Protesters gather outside the Parliament building in Ottawa, Ontario, Canada, on Feb. 17 as part of the Canadian trucker “Freedom Convoy” against vaccine mandates. (Photo: Scott Olson/Getty Images)

In Canada, first the doxxing, then the struggle session.

This week, one of the most popular small-donor fundraising sites for the Canadian truckers protesting the COVID-19 vaccine mandates, GiveSendGo, was hacked. The names of donors were shared with the public. We know about this mostly because erstwhile news organizations, such as Reuters, have showered attention on the breach as if they were providing a public service.

Indeed, many of the same outlets that refused to report specifics about the Hunter Biden email scoop in 2020 (though the story was obtained in a completely ethical journalistic manner) or share specifics from the Democratic National Committee email hacks in 2016 (illegally obtained, but with high news value) have no compunction highlighting a site that takes aim at ordinary people who have done nothing but engage in political dissent.

In Canada, the doxing has already begun. Tammy Giuliani, a small-business owner who employs 40 people, was forced to shut down her gelato shop because of threats made against her employees after her $250 donation to the truckers’ cause was disclosed, according to the Ottawa Citizen.

The Citizen’s Blair Crawford doesn’t marvel at the fact that a person who lives in a (nominally) liberal democracy can be intimidated for engaging in political protest, but instead strongly insinuates that Giuliani had it coming: “Giuliani made her Feb. 5 donation on the second weekend of the demonstration, when Ottawa police were describing it as ‘volatile and dangerous’ and lawyers were seeking a court injunction to silence the constant blaring of air horns in the downtown core.”

So what? The police were wrong. The protests have not been “dangerous” to this point. A deep dive into the scaremongering tactics of Canadian authorities might be worthwhile for someone who isn’t merely a stenographer at the struggle session: “Never in our wildest dreams did we anticipate what has transpired over the past couple of weeks,” she said. “None of us anticipated what it turned into, and we certainly don’t condone it.”

No one can blame Giuliani for engaging in a bit of self-flagellation to save her business. Giuliani, who claims she gives money to animal shelters, a soccer team, and a choir (“We rarely say no”), was compelled to take out loans to stay open during the pandemic. It’s “a debt that will probably take seven years to pay off,” she told the Citizen.

At least one reporter for The Washington Post, already on the case, allegedly is contacting Americans who have contributed as little as $40 to the anti-mandate cause in Canada. How could the Post possibly know the names of donors if it wasn’t working off the list obtained through the hack? And how could it possibly care? That is, unless the goal is to “Brendan Eich” dissent.

Now, of course, this isn’t Canada. The government doesn’t have the authority to unilaterally seize the assets of political protesters as if it were a Third World autocracy.

Yet this is what the hysterics surrounding the specter of “dark money” is all about. The fact that we aren’t obliged to publicly attach our names to all political donations is endlessly frustrating to those intent on smearing and intimidating their political opponents.

Anonymous speech is as much a part of “democracy” as marching in the streets or writing a newspaper column. And in a healthy liberal media environment, reporters would be demanding answers from those abusing power, not working with them to inhibit political speech.