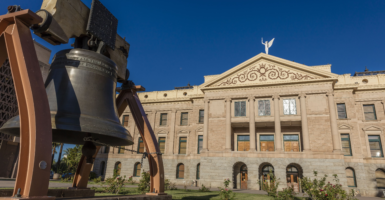 National family and culture advocacy organizations are targeting an Arizona LGBTQ bill, warning state lawmakers that the legislation does not protect religious liberty and enshrines sexual orientation and gender identity into law as protected categories.

“No Arizonan should be forced to live in a society that denies the biological differences of men and women,” says the letter, first obtained by The Daily Signal, from the advocacy groups to Arizona lawmakers. “No Arizonan should be coerced by the government to act in accordance with falsehoods about human nature.”

The letter calls on Arizona Speaker of the House Russell “Rusty” Bowers to withdraw support for the Equality and Fairness for All Arizonans Act (HB 2802), and is signed by Citizens for Renewing America President Russ Vought and Executive Director Wade Miller; American Principles Project Executive Director Terry Schilling and its director of policy and government affairs, Jon Schweppe; and State Freedom Caucus Network President Andrew Roth.

“Fairness for All paints itself as a compromise in the culture wars, but is nothing but a concession founded on untruths about human nature,” Vought warned The Daily Signal on Wednesday. “Its very basis relies on a sexually progressive ideology that rejects the design of men and women; to accept it is to enshrine into law a lie about who we are fundamentally as human beings.”

Bowers, a Republican, has positioned HB 2802 as an opportunity for state lawmakers to choose unity over anger.

“I’m grateful for the opportunity, as the apostle Paul wrote in Romans 14:13, to not place a stumbling block in front of my brother,” Bowers said in early February, according to the Deseret News. “For too long, we have held to opinions and thoughts that are stumbling blocks to each other.”

But the advocacy group leaders maintain that the bill’s federal counterpart is HB 1440, the woke and highly disputed Fairness for All Act, warning that the Arizona legislation is masquerading as a “compromise in the culture wars,” but will only “guarantee further dissolution.”

“Republicans need to realize that cultural wars are winning,” Vought told The Daily Signal. “So far, conservatives have put out the threat of a national Fairness for All effort. Now, we are shifting this battle to the states.”

The letter tells Bowers and his fellow state lawmakers that the bill’s religious liberty protections are “wholly inadequate” and based on notions that religious Americans only practice their faith in houses of worship or as part of a religious organization. Contrasted with the bill’s broad language on transgender nondiscrimination provisions, the leaders wrote, those religious freedom protections are very narrow.

“HB 2802 attempts to temper this radical change in our laws, culture, and society with a religious liberty exemption for churches and religious institutions,” the letter said. “The exemption drafted is insufficient to resolve the religious liberty and freedom of conscience concerns that are inherent to the Fairness for All project.”

The leaders wrote that the bill would codify “self-evident falsehoods about human nature in state law” and “assumes that the only citizens in need of protection from the consequences of this ideology once it is embedded in anti-discrimination law are religious.”

“Some Republicans really need to read the room,” Schilling told The Daily Signal. “Nationwide, the disastrous consequences of the left’s radical agenda have become crystal clear: biological males taking over girls sports, kids being coached into sex changes by teachers behind the backs of parents, women being sexually assaulted in prison by ‘transgender’ inmates, and more. Every day, it seems, a new outrage emerges.”

Americans are furious at these developments, Schilling said, and they want their leaders to fight back.

“A growing number of Republicans, such as [South Dakota] Gov. Kristi Noem and Rep. Elise Stefanik [of New York], have heard these calls and are taking a more aggressive stance on these issues,” the American Principles Project executive director said. “Yet, there are still too many in the party who seem to think waving the white flag in the culture war is the right approach. “

“These Republicans need to be put on notice,” Schilling added. “If they refuse to defend their constituents from the radical left, they will face political consequences. A party that caves in the face of this evil is one headed for permanent defeat.“