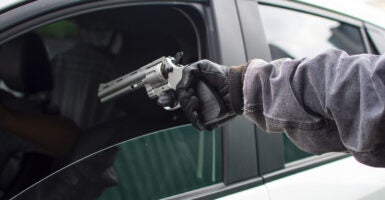 Now more than ever, it’s necessary to highlight armed citizens who rely on their right to bear arms when the government can’t or won’t be there to protect life, liberty, or property from violent criminals. (Photo illustration: seksan Mongkhonkhamsao/Getty Images)

Just one month into 2022, it became clear that the new year hasn’t brought relief from the unprecedented spikes in violent crime in many cities since the summer of 2020.

Take Philadelphia, for example. With 140 carjackings reported through the first five weeks of 2022, the city is well on pace to surpass last year’s total of 757 carjackings.

Portland, Oregon, meanwhile, experienced more homicides and shootings in January 2022 than in January 2021—doubly concerning, since 2021 was by far the most violent year in Portland’s history.

These cities are far from alone.

Yet, progressive prosecutors in many of them seem to be doing their best to ensure that even the most violent criminals receive minimal punishment. Worse, cities such as San Jose, California, choose to lay the blame for criminal gun violence at the feet of lawful gun owners, imposing useless insurance mandates and unconstitutional taxes.

Now more than ever, it’s necessary to highlight the importance—and prevalence—of armed citizens who rely on their Second Amendment rights when the government can’t or won’t be there to protect life, liberty, or property from violent criminals.

For this reason, The Daily Signal each month publishes an article highlighting some of the previous month’s many news stories on defensive gun use that you may have missed—or that might not have made it to the national spotlight in the first place. (Read other accounts here from 2019, 2020, and 2021.)

These cases and the many others we found last month underscore the importance of the right to keep and bear arms for ordinary Americans.

The ability to defend one’s life, liberty, and property from criminals is particularly important during times like these, when many law enforcement agencies are struggling to keep up with rising crime rates and many public officials refuse to meaningfully enforce the law.

As the year progresses, policymakers should strive to acknowledge and support this fundamental right, rather than undermining it with more unnecessary restrictions on lawful gun ownership.