First Black Woman Supreme Court Justice Could Be… a Man? 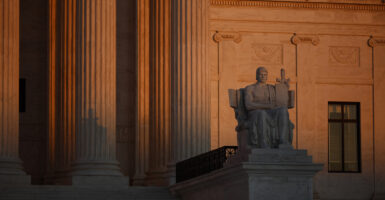 President Joe Biden has vowed to elect the first black woman to the Supreme Court, following the retirement of Justice Stephen Breyer. Pictured: The U.S. Supreme Court building on the day it was reported that Breyer would soon retire on Jan. 26, 2022. (Photo: Chip Somodevilla/Getty Images)

Mario Diaz is the general counsel of Concerned Women of America.

Yes. Don’t be surprised. “Diversity and equity” are of paramount importance to the Biden administration. He is making sure you remember it as he is making this announcement. So why would you assume it is a “she”?

At least theoretically, the first black woman Supreme Court justice could be a biological male who self-identifies as a woman. The move would go right along with current White House practice.

Recall that the Biden administration celebrated with great pride the appointment of Dr. Rachel Levine, a biological male who transitioned in order to appear as a woman, as the “first female four-star admiral of the U.S. Public Health Service Commissioned Corps.”

This administration has also promised to change the long-standing definition of “sex” as biological male-female distinctions under Title IX of the Educational Amendments of 1972—which prevents sex discrimination in any educational program receiving federal funding—thereby undoing 50 years of women’s progress in this, its anniversary year.

So, yes, in the eyes of the new woke White House, a person who is male biologically can be a woman if they want to be. Males can be females. Period. There is no distinction whatsoever. Unchangeable “XX” and “XY” chromosomes in every cell of a person’s body don’t matter.

The White House has shown zero regard for the real-world impact of its woke policies on women. This week, the Daily Mail reported on what can only be described as hostile, ruthless conditions at the University of Pennsylvania women’s swim team.

The Daily Mail says teammate Lia Thomas, a biological male who previously swam on Penn’s men’s team, but now identifies as a woman and is obliterating women college athletes, is making teammates feel uncomfortable in the locker room by not always covering up the swimmer’s male genitals.

Multiple women have complained, but they are “basically told that we could not ostracize Lia … and that there’s nothing we can do about it, that we basically have to roll over and accept it, or we cannot use our own locker room,” the report says.

Thomas’ presence on the University of Pennsylvania swim team prompted a longtime swimming official to quit over the controversy.

In what world is this acceptable? In what world is this pro-woman? We have civil rights laws against creating a hostile work environment. In this context, the Penn swim team’s choice to allow Thomas to join an all-women team is a direct violation of Title IX protections in federal law. But the Biden administration intentionally ignores them all and is working to change them all formally. These historical protections for women in federal law must bow down to the new woke rules.

Biology itself must bow to the White House’s twisted view of “diversity and equity.”

For, make no mistake about it, this untenable situation in colleges all over the country is of President Joe Biden’s design. They are fighting for biological males in women’s sports and ignoring women’s concerns purposely.

Under the previous administration, Concerned Women for America, the largest public policy organization for women in the nation (the organization I represent), won a significant case against Franklin Pierce University in a Title IX complaint against its policy of allowing biological male athletes self-identifying as women to compete in women’s sports.

The Office of Civil Rights agreed with Concerned Women for America that to allow a biological male to compete in women’s sports was a violation of Title IX’s equal opportunity protections for women, and the university agreed to take steps to protect women in the future by rescinding its transgender participation and inclusion policy.

But the Biden administration is set on destroying women’s protections under federal civil rights law by redefining the word “sex” in a way that divorces it from the scientific, biological, genetic delineation of male and female, and marries it instead to the arbitrary, ever-changing, self-identification of “gender identity.” So, similar complaints by women are being ignored.

A 2020 complaint by Concerned Women for America against the University of Montana, for example, is officially under investigation but continues to linger, prolonging the injustice against women athletes.

As in the case of college sports, women are always the losers under this new woke White House regime. The changes do not affect the sexes equally. This disparate impact has historically been recognized in law, but again, Biden’s new woke rules erase that, too.

This is not a partisan issue. Concerned Women for America has partnered with the Women’s Liberation Front and a wide-raging diversity of women’s groups in an effort against the California Department of Corrections to defend women who have been assaulted by biological male inmates claiming identity as women and unjustly being allowed to be imprisoned among the female population. The stories are heartbreaking.

But they don’t break the hearts of Biden or his White House. Instead, they continue to ignore the victims of their unjust policies, plunging all of America right along with their woke policies to the detriment of women everywhere. The same women they claim to be elevating by pledging to nominate the first-ever black woman to the U.S. Supreme Court, whose apparent preferred pronoun may be “they.”

We can always consider he could have made one of his infamous mistakes in the tweet. But whatever the case, for women’s sake, let’s hope this time the president actually means what we all think he means when he talks about appointing a woman.