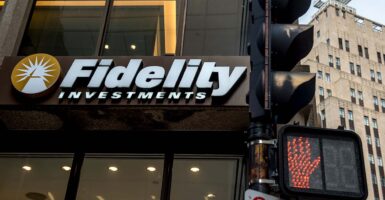 The letter was in response to a petition from Unmasking Fidelity, a coalition of far-left advocacy groups. The activists are demanding that Fidelity Charitable disclose contributions over the past five years to a select group of 10 mainly conservative organizations, among them the Alliance Defending Freedom, Turning Point USA, and the Family Research Council.

“We are writing to you about our continuing concern that Fidelity Charitable’s Donor-Advised Funds (FC DAFs) contribute to tax-exempt non-profits that promote anti-immigrant, anti-Muslim, anti-Black or anti-LGBTQ rhetoric and policies that enable white supremacist and fascist violence,” the Unmasking Fidelity petition reads.

Fidelity Charitable, an arm of Fidelity Investments, is a 501(c)(3) organization that enables investors to donate to a wide range of tax-exempt organizations. It distributed $9.1 billion to charities in 2020, making it the nation’s top grant-maker, according to its website.

Fidelity Charitable describes itself as “cause-neutral” and says it “does not limit grant-making to specific charitable activities or fields of interest, to specific geographical or demographic criteria, or to specific organizations based on political, religious, or philosophical grounds.”

“Americans should be able to donate to charities and nonprofit organizations without the fear of being harassed by left-wing political activists,” Roberts wrote on Twitter.

“We write in response to Unmasking Fidelity’s list of demands that would jeopardize donor privacy and charitable choice,” the letter stated. “As a leader in philanthropy, Fidelity Charitable has an outsized opportunity (and responsibility) to resist demands to inject polarization, division, and enmity into charitable giving.”

“Requiring that nonprofits disclose their donors not only exposes existing donors to the threat of doxing and harassment, but also discourages charitable giving and participation in the marketplace of ideas,” the Philadelphia Statement letter said. “Public advocacy is for everyone, not just those able to weather abuse. And donors have good reason to fear abuse. In our present age of cancel culture and social media mobs, too many are quick to ostracize, lambast, and threaten those with whom they disagree.”

Stephen Austin, a spokesman for Fidelity Investments, told The Daily Signal that Fidelity Charitable allows its more than quarter-of-a-million donors to bring their own values and perspectives to their giving.

“We conduct a robust review of each grant recommended by our donors, to ensure the organization is in good standing with the IRS and the funds are used for charitable purposes,” Austin said. “The IRS, not Fidelity Charitable, has oversight over an organization’s tax-exempt status.”