The Growing Fight Over Forcing Nonprofits to Disclose Donors 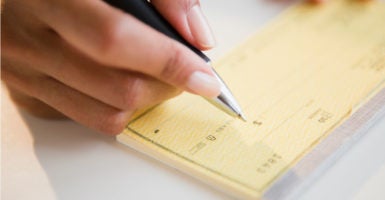 Lawmakers and conservatives in states across the country are growingly concerned that the push for donor disclosure will harm privacy rights. (Photo:JGI/Jamie Grill Blend Images/Newscom)

“I’ve been contacted by dozens of constituents with concerns over their rights to privacy, and possible harassment by organizations or individuals, or even their employers, if their donation histories are made public,” Oklahoma state Rep. Mark Lepak, a Republican, told The Daily Signal in an email.

At least a dozen states have considered such donor disclosure legislation this year, but none has been successful, according to the State Policy Network, a nonprofit organization that supports independent think tanks around the nation.

“Since Jan. 1, 16 states have considered laws that would require causes and groups like The Heritage Foundation to report the names and addresses of their supporters to state government,” Tracie Sharp, president and CEO of the State Policy Network, said in an email to The Daily Signal.

Heritage, a leading conservative think tank, is the parent organization of The Daily Signal, its multimedia news operation.

None of these donor disclosure initiatives has passed so far, Starlee Coleman, senior policy adviser at the State Policy Network, told The Daily Signal in a phone interview.

“There is a coalition of groups that have been extremely active in trying to defeat these laws, so they are not just failing on their own,” Coleman said. “They are failing from a lot of work from nonprofit organizations coming together to defeat them.”

Brendan Eich, former CEO of Mozilla Firefox, is a perfect example of the harm that donor disclosure laws can cause, Missouri state Sen. Bob Onder said.

“If anyone doubts that the donors can be intimidated and harmed when left-wing groups get a hold of their names, just ask Brendan Eich,” Onder, a Republican, said in a phone interview with The Daily Signal.

Political opponents forced Eich out of his job in 2014 after disclosure of his donation to a ballot initiative in California to preserve the state’s definition of marriage as the union of a man and a woman.

“He had [made] a thousand-dollar donation to Proposition 8, which was the California marriage amendment, and he ended up having to step down as CEO of one of our top tech companies in the world because of the left’s intimidation,” Onder said.

“I have my own concerns,” said Lepak, who represents Rogers County in the northeastern part of Oklahoma. “We have a right to free speech, and today, we see acts of violence against those with whom we disagree, the well-publicized events on many college campuses being a prime example, and more recently, the shootings at the congressional baseball practice [outside] Washington, D.C.”

“I don’t think there were a series of groups behind this bill,” Murphey told The Daily Signal in an email. “I think that Sen. Sykes was exploring methods for more campaign transparency in response to issues arising from last fall’s Oklahoma ballot initiatives.”

“That’s the point of this bill,” said Mickelson, who introduced the legislation in the House. “Why are you afraid to have your name associated with your ideas?”

Two states known for their donor disclosure laws are California and New York.

Both states “require nonprofits to violate the privacy of their supporters,” Matt Nese, director of external relations at the Center for Competitive Politics, an organization dedicated to defending First Amendment rights, told The Daily Signal in an email.

However, Nese said it is difficult to know how widespread the push for donor disclosure is.

“It’s hard to quantify the exact number of states that have laws on the books requiring nonprofits to report the private information—names, home addresses, and, in some cases, occupations, and employers—of their supporters to the government for publication in a permanent, searchable, online database,” Nese said.

Onder, who represents a portion of St. Charles County in Missouri, says citizens are aware that donor disclosure laws infringe on their right to privacy.

“Well, I think the public understand free speech rights and the First Amendment and the possibility of organizations having their donors intimidated,” Onder told The Daily Signal.

“I led the floor fight against that, and I didn’t really filibuster. I just offered a series of amendments, one of which would have protected donor privacy, and when [Schaaf] saw that my amendment was likely to pass, he just pulled back his bill and that was the end of his efforts,” Onder said.

Hans von Spakovsky, a senior legal fellow at The Heritage Foundation, told The Daily Signal in an email that he doesn’t think donor disclosure laws are necessary:

That to me is a violation of the First Amendment, there’s no reason for that. You don’t have to know who the donors are to the National Rifle Association or Planned Parenthood or the Sierra Club to make your own judgment as individuals about what their message is [and] whether it is credible.

“Political candidates have long been required in Missouri to disclose donors, because transparency is good for the political process,” Emery told The Daily Signal in an email, adding:

More recently, however, radical leftists have begun to use that information for aggression. Rather than it being a means to stay informed and advocate for or against the candidate or the issue, they have begun to attack the donor in order to limit or prohibit their free expression.

Once that began, donors had to either suffer the consequences of the attacks, stop donating, … or find a way to continue to support candidates and issues without becoming someone’s mortal enemy.

“Privacy is for individuals,” Anderson said. “You can hear the term transparency and think, ‘That’s always good,’ but it is important to know that transparency is the tool by which the people hold our government responsible.”

Transparency shouldn’t be used to intimidate or silence donors to particular causes, she said.