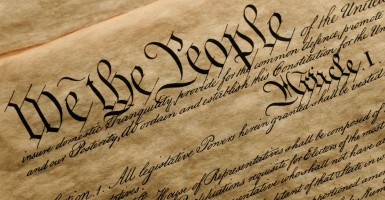 Critics of the current campaign process for state and federal offices are urging states and Congress to require nonprofit advocacy organizations to disclose the identities of their donors to the government, and thus the public, when they engage in political speech and discussion of public policy issues that might have an effect on an election.

However, such forced disclosure may very well violate free speech and associational rights under the Constitution.

Americans and advocacy organizations are already subject to campaign disclosure requirements under state and federal law. For example, the names, home addresses, occupations, and employers of individuals contributing to federal candidates must be disclosed, with similar disclosure requirements in state elections. Political action committees must disclose all of their contributors and donors. Nonprofit organizations engaging in independent political expenditures that urge the support or opposition of candidates must also file detailed expenditure reports with the government.

Forcing nonprofit organizations that are not PACs to disclose their private donors as a condition of speaking about elections, candidates, issues, and politics in general would go far beyond the already stringent disclosure requirements that are currently in place. Such a requirement could, in fact, harm the vibrant American democracy we enjoy today, one where there is vigorous debate and discussion of the important, often vital issues we face as a nation.

In 1835, Alexis de Tocqueville said in “Democracy in America” that “Americans of all ages, all conditions, all minds constantly unite,” forming all types of associations in which they take part. Those associations are the organizations that Americans join to multiply their voices and their advocacy on many different issues of importance to them. No matter where Americans fall in the political, cultural, and social arena, from liberal to conservative to somewhere in between, there are membership associations like the NAACP, the NRA, the Sierra Club, and a host of others that share their particular views and opinions.

Forcing Americans to report to the government which of these organizations and associations they donate money to and which ones they are members of, could chill speech, diminish free expression, and reduce the amount and quality of advocacy and speech about many important, issues, political, cultural, and otherwise.

Such forced disclosure may, in fact, violate the First Amendment as outlined in NAACP v. Alabama (1958), in which the Supreme Court of the United States stopped attempts by the state of Alabama to force such disclosure by civil rights organizations because of their political speech and political advocacy.

It was obvious to the Court that “effective advocacy of both public and private points of view, particularly controversial ones, is undeniably enhanced by group association,” which is protected by the Constitution. According to the Court, it was “hardly a novel perception that compelled disclosure of affiliation with groups engaged in advocacy may constitute as effective a restraint on freedom of association as” other forms of coercive government action.

Is donor privacy an inherent right under the First Amendment?

In 1995, in McIntyre v. Ohio Elections Commission, the Supreme Court upheld anonymous pamphleteering, which it called “not a pernicious, fraudulent practice, but an honorable tradition of advocacy and of dissent.”

Justice Clarence Thomas argued in his concurrence that anonymity is not merely a factor to be considered in assessing whether disclosure requirements burden speech. Instead, protecting anonymity—for private speech—is inherent in the phrase “freedom of speech, or of the press,” as the founding generation understood that phrase. The right to express one’s opinion includes the right to do so anonymously.

Forced donor disclosure raises important issues about elections, public policy, transparency, freedom of speech, freedom of association, and privacy. Is donor privacy a “pernicious, fraudulent practice,” or is it “an honorable tradition of advocacy and of dissent” protected by the Constitution?

On Tuesday, September 29, the Meese Center for Legal and Judicial Studies at The Heritage Foundation will present its third “Preserve the Constitution” series event with a panel discussion: “Advocacy and the First Amendment: Should Nonprofits Disclose Their Donors.”

Speakers will include Brad Smith, the chairman of the Center for Competitive Politics and former chairman of the Federal Election Commission, and John Samples, vice president of the Cato Institute. Smith and Samples are well-known and widely-published experts on campaign finance issues, free speech, and the First Amendment.

Join us in person or watch it here at the Heritage website.