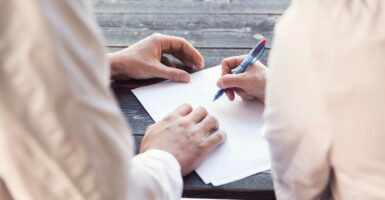 The Accelerating Charitable Efforts Act would impose distribution timeframes on charitable dollars. It envisions different tax schemes for these timeframes, and in some cases mandates a 5% minimum payout. (Photo: Maskot/Getty Images)

JB Horton is the chief development officer of the Texas Public Policy Foundation and previously served as the John Von Kannon Fellow in Philanthropy at The Heritage Foundation.

Jeffrey Trimbath is the senior advisor for the Conservative Partnership Institute and previously served as the John Von Kannon Fellow in Philanthropy at The Heritage Foundation.

“A solution in search of a problem.” That’s the best way we’ve heard summarizing the recent proposed legislation to increase mandates and regulations for charitable giving through donor-advised funds.

We are both fundraisers, with a combined 25 years in major and legacy giving for national and state-based nonprofit organizations. We also have consulted with several diverse nonprofit groups. We are privileged to work with some of the most generous, discerning, and passionate philanthropists in the country, counseling those givers to make an impact that exceeds their expectations.

It is with this background in working with donors that we think the mandates on donor-advised funds of the Accelerating Charitable Efforts Act, currently under Senate consideration, are a bad idea. The legislation would impose distribution timeframes on charitable dollars. It envisions different tax schemes for these timeframes, and in some cases mandates a 5% minimum payout.

Their adoption will increase the cost and administrative burden on philanthropists and their advisors, ultimately reducing the total amount that goes to charity.

Americans have long been the most generous givers in the world. Giving to charity is inherently an individual decision. Unlike paying your taxes, or satisfying a bill, giving your money to charity is your decision. Nobody shows up at your house, points a gun to your head, and says “give me your money to help kids in need.” No—the entire decision begins and ends with the individual.

Yes, the tax code can incentivize folks to make a gift. But those incentives have always been marginal.

Limiting the options for those who support charity, therefore, doesn’t make any sense. And this is particularly true for those in the middle to upper middle class, who don’t have access to the legal and accounting resources to set up their own foundations. That’s one of the main appeals of donor-advised funds.  They are exceedingly simple to set up – easily done online in a matter of minutes.

Many of the donor-advised funds  sponsored by large organizations don’t even have minimum amounts to open accounts. Instead of a tool for the “super-wealthy” as has been reported, these accounts have popularized philanthropy to increasing numbers of givers.

And yes, they give donors the option to distribute funds either immediately, or in the future. But this flexibility is good for donors and society. Donors’ interests change, and charitable causes and needs change all the time. Giving donors this kind of flexibility allows them to respond either now, or in the future, depending on the current needs (who could have predicted the unique charitable need from COVID-19 just 2 years ago?).

But here’s what proponents of increased regulation curiously omit—at no point in the life of a donor-advised funds can the funds be used to support anything except charity. Unlike other tax-deferred accounts which can support anything after a certain period of time (like IRA’s), or directly benefit other relatives (529 accounts), or pay for abortions (via health savings accounts), every dollar in a donor-advised funds  must only go to support public charities. No boats, no jets, no tuition for Cousin Buffy at the Ivy League.

Now, one might charge that the National Philanthropic Trust is a “pro- donor-advised funds” group and so its results reflect its biases. But, even a recent NBER working paper, authored by a proponent of this legislation, showed that donor-advised funds distribute 14-23% of their assets, depending on the calculation. We’re no mathematicians, but 14% is greater than the 5% minimum payout from foundations.

Only in Washington would it make sense to make the legal floor for one entity a new ceiling for another.

Giving to charity is inspired primarily by mission, not tax breaks. We know that the most important reason that donors give is because they agree with the mission of the nonprofit. The greats of our field (like our mentors, John Von Kannon, Jerry Panas, and Bill Sturdevant) have taught us this. Donors chose to give to those charities whose mission they want to support at that particular time. Many factors may go into giving, but agreement with the mission is always at the top, and tax benefit is always at the bottom.

We believe that giving donors—regardless of political ideology, religious conviction or economic status—more choices and more control over their own giving has resulted in greater financial benefit for charity. We would hate for that to change.