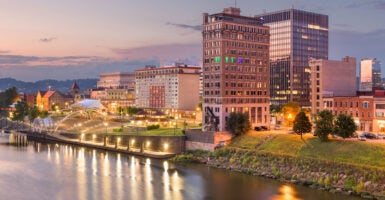 The skyline of Charleston, West Virginia's capital, is reflected on the Kanawha River at dusk. (Photo: Sean Pavone/iStock/Getty Images)

Practical partnerships between foreign countries and individual American states matter—perhaps more than ever, as they involve treasure troves of diplomatic, military, and economic interactions.

Among a good number of notable states, West Virginia offers concrete examples of pragmatic state-to-country economic engagement through its partnerships with America’s partners around the world.

On the security partnership front, in June, West Virginia formalized its cooperation and partnership with Qatar through the National Guard Bureau’s State Partnership Program.

This is the second State Partnership Program for West Virginia, which has partnered with Peru since 1996 though the program, particularly in the areas of counterinsurgency, anti-terrorism, emergency preparedness, disaster response, and recovery.

Qatar’s Ministry of Defense formally requested a partnership through the State Partnership Program in 2016. In 2018, West Virginia was selected to partner with Qatar. Since then, West Virginia has maintained active engagements to facilitate unique training opportunities with Qatar, which signed an accord with the United States in November for Qatar to represent U.S. diplomatic interests in Afghanistan.

West Virginia Gov. Jim Justice, a Republican, looks forward to the state’s National Guard taking a lead role in the state developing a long and enduring partnership with the Arabic Middle Eastern nation.

“We will leverage our National Guard’s extensive military capabilities to expand upon military-to-military, military-to-civilian, and civilian-to-civilian engagements that create mutually beneficial outcomes for Qatar and West Virginia,” Justice noted, adding:

Also notable is that West Virginia’s interaction with the world goes beyond security cooperation.

For instance, West Virginia and the United Kingdom have been connected through trade and investment engagements.  The U.K. was the 11th-largest export market for West Virginia in 2019, with the total of West Virginia’s exports of goods and services to the U.K. amounting to more than $200 million.

Cultivating the dynamic economic relationship further through the private sector, in 2020, a U.K. technology company, DST Innovations, selected West Virginia to establish its new American facility, where it would partner with its West Virginian counterpart, Blue Rock Manufacturing.

The West Virginia facility would interact with a $1.4 billion natural energy project based in Wales, furthering West Virginia’s “special relationship” with the U.K. and advancing international energy innovation.

West Virginia’s pragmatic global partnership also has been linked to the Indo-Pacific region. Last February, the state signed a formal agreement with Vietnam to enhance economic relations between the Mountain State and the Southeast Asian nation, whose relationship with America has “become increasingly cooperative and comprehensive, evolving into a flourishing partnership that spans political, economic, security, and people-to-people ties.”

Signing a memorandum of understanding that will bolster economic relations between West Virginia and Vietnam into the future, Justice emphasized, “International trade—working together with one another—is so important to West Virginia.”

From a broader policy perspective, encouraging America’s allies to engage with 50 states requires enhancing America’s competitive economic dynamism through polices that keep U.S. markets open and attractive. Indeed, now is not the time to slow and delay the much-needed economy recovery by employing more protectionist trade and investment policies triggered by the COVID-19 pandemic.

If there was ever a time to adhere closely to the principles of economic freedom, this is it. Any notion that America can deal with the ongoing pandemic and make the economic recovery stronger and faster without access to international investment and trade flows is wishful thinking.

America’s engagements with the world through security, trade, and investment have been the framework upon which its prosperity rests. Individual states across the U.S. should take greater advantage of taking a practical, strategic interaction with the countries that have indicated a willingness to forge closer trade partnerships with the United States.