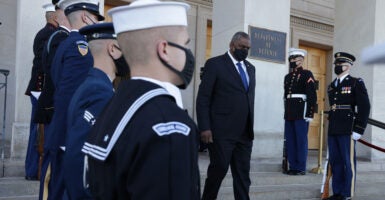 A federal judge on Jan. 3 granted an injunction against the Biden administration and the Department of Defense, preventing them from enforcing the vaccine mandate against any of the named service members who had applied for a religious exemption. Pictured: Defense Secretary Lloyd Austin is seen at the Pentagon on Dec. 13. (Photo: Alex Wong/Getty Images)

In one of many ongoing federal lawsuits challenging COVID-19 vaccine mandates across the country, Judge Reed O’Connor of the U.S. District Court for the Northern District of Texas issued a group of Navy SEALs and Naval Special Warfare personnel a resounding victory Jan. 3 in U.S. Navy SEALs 1-26 v. Biden.

In his order, O’Connor granted an injunction against the Biden administration and the Department of Defense, preventing them from enforcing the vaccine mandate against any of the named service members who had applied for a religious exemption.

O’Connor ruled that the blanket denial of their religious waiver requests amounted to a violation of the service members’ rights under the First Amendment and the Religious Freedom Restoration Act.

Under that law, the government may substantially burden a person’s exercise of religion only if it demonstrates that burden is (1) in furtherance of a compelling governmental interest; and (2) is the least restrictive means of furthering that interest.

For O’Connor, the violation of the law was clear:

Defendants have substantially burdened Plaintiffs’ religious beliefs. The government burdens religion when it ‘put[s] substantial pressure on an adherent to modify his behavior and to violate his beliefs.’

That is especially true when the government imposes a choice between one’s job and one’s religious belief. Here, Plaintiffs must decide whether to lose their livelihoods or violate sincerely held religious beliefs.

Because they will not compromise these religious beliefs, Plaintiffs have been threatened with separation from the military and other disciplinary action.

Like the other service branches, the Navy required all active-duty service members to be fully vaccinated before Nov. 28 or risk a “full range” of disciplinary action.

While it allowed service members to apply for religious exemptions to the mandate, it has not granted a single one. In fact, as of Dec. 17, the religious accommodation requests of at least 29 of the 35 naval plaintiffs had been flatly denied.

The Navy has, however, granted medical exemption requests submitted by other personnel.

This disparity of treatment between medical and religious exemptions was constitutionally prohibited, O’Connor said:

The service members who filed the lawsuit represent more than 350 collective years of military service, and more than 100 combat deployments. When they inquired about seeking religious accommodation for the vaccine, the Navy informed many of them that they could face court-martial or involuntary separation if they refused to take the vaccine.

According to the First Liberty Institute, the public interest law firm representing the service members, each of the denials appeared to be identical, suggesting the Navy had not taken any of the religious exemption requests seriously.

O’Connor made note of this in his order, calling the process for seeking a religious exemption nothing more than “theater,” stating that the Navy “merely rubber-stamps each denial,” and stressing that “the record overwhelmingly demonstrates that the Navy’s religious-accommodation process is an exercise in futility.”

“The Navy service members in this case seek to vindicate the very freedoms they have sacrificed so much to protect,” O’Connor wrote, adding:

The COVID-19 pandemic provides the government no license to abrogate those freedoms. There is no COVID-19 exception to the First Amendment. There is no military exclusion from our Constitution.

Forcing a service member to choose between their faith and serving their country is abhorrent to the Constitution and America’s values … . Punishing SEALs for simply asking for a religious accommodation is purely vindictive and punitive.

We’re pleased that the court has acted to protect our brave warriors before more damage is done to our national security.

The next stop in the litigation is likely to be an appeal by the Department of Defense and the Biden administration to the U.S. Court of Appeals for the 5th Circuit.

On Jan. 7, the Supreme Court is set to hear oral arguments in a set of high-profile, consolidated cases on the Biden administration’s vaccine mandates for private-sector entities with 100 or more employees, and for health care facilities that receive Medicaid and Medicare funding.

This article has been modified since initial publication.