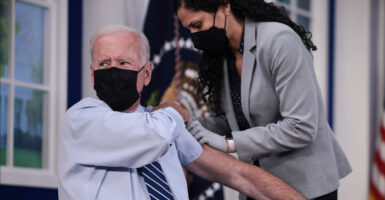 President Joe Biden rolls up his sleeve before receiving a third dose of the Pfizer/BioNTech COVID-19 vaccine in the White House in September. (Photo: Anna Moneymaker/Getty Images)

The U.S. Supreme Court will hear arguments Jan. 7 in cases challenging two of the Biden administration’s COVID-19 vaccine mandates. Those mandates would apply to more than 100 million Americans who work at private-sector businesses and health care facilities.

With compliance deadlines quickly approaching, the Supreme Court decided to step in and schedule an unusual Friday session for oral arguments.

The Heritage Foundation, a petitioner in the case challenging the Occupational Safety and Health Administration’s COVID-19 vaccine mandate, asked the high court Saturday to halt the government’s order. Heritage, a private employer with more than 100 workers, is subject to OSHA’s requirement. (The Daily Signal is Heritage’s news outlet.)

The court announced Wednesday it would hear two cases against OSHA: one from a coalition of states, led by Ohio, and the other from the National Federation of Independent Business.

Biden announced the private-employer mandate in September and OSHA issued its rule in November, estimating that 84 million workers would be affected. The agency ordered employers to “develop, implement, and enforce a mandatory COVID-19 vaccination policy” and required any workers who remain unvaccinated to “undergo [weekly] COVID-19 testing and wear a face covering at work.”

“This mandate not only impinges on the constitutional rights of employees but creates onerous burdens on employers, including enforcing the mandate, storing private medical information of all employees’ vaccine status, and conducting onsite weekly COVID testing,” said Jordan Sekulow, executive director of the American Center for Law and Justice, which represents Heritage. “Quite simply, it is an unconstitutional federal power grab.”

The second case, which will also have a Jan. 7 hearing, involves the Centers for Medicare & Medicaid Services at the U.S. Department of Health and Human Services.

The states of Louisiana and Missouri will be arguing against a requirement that health care workers at facilities receiving Medicare and Medicaid funding are fully vaccinated. It is estimated to affect 17 million workers at 76,000 hospitals, health care and long-term care facilities.

Lower courts blocked the mandate for health care workers, prompting the Biden administration to request a hearing before the Supreme Court.

As the cases play out before the court, OSHA updated its guidance for private-sector employers, announcing that it would be “exercising enforcement discretion.” The agency doesn’t plan to issue “citations for noncompliance” before Jan. 10—just three days after the Supreme Court hears arguments.

Given the uncertainty, many petitioners, including Heritage, asked the Supreme Court to issue a stay in the case against OSHA. The court opted not to do so and it’s unknown when the justices will issue their ruling.

>>> Fauci Undermined Trump, Misled Americans on COVID; ‘I Was Stunned at What I Saw,’ Dr. Scott Atlas Says

Heritage Foundation President Kevin Roberts, appearing on Newsmax to discuss the case, noted that it was the first time in the organization’s 48-year history to file a lawsuit.

“We stand to lose a lot,” Roberts said, “if the federal government is able to pierce that sacrosanct relationship between employer and employee.”

Heritage, whose scholars have written extensively on COVID-19 vaccine mandate, argues that OSHA lacks the authority to impose such a rule on private businesses.

It is unprecedented for us to file a lawsuit on our own behalf. The reason we’ve done so—and this should be telling for Americans—is that we believe the threat from this administration is that severe and is that unprecedented. And if we don’t stand up for our employees and their private data, and all Americans, then we believe this administration is going to get away with a lot more. They have revealed in less than one year what they are capable and willing to do. The Heritage Foundation, being the beachhead for Americans behind enemy lines, is going to be on offense every single day. We are your watchdog and we’re also going to be a bulldog when it comes to putting government back in its box.

The Biden administration has defended its measures, citing the rising number of COVID-19 cases to justify the government mandates.

“COVID-19 has had a devastating impact on workers, and we continue to see dangerous levels of cases,” U.S. Labor Secretary Marty Walsh said Nov. 4 when he announced the mandate. “We must take action to implement this emergency temporary standard to contain the virus and protect people in the workplace against the grave danger of COVID-19.”

The National Federation of Independent Business, which filed a lawsuit with other business groups, said in its petition that “The goal of getting more Americans vaccinated does not allow the executive branch to use regulatory fiat to achieve a significant social, economic, and political change via the limited emergency power that Congress authorized.”