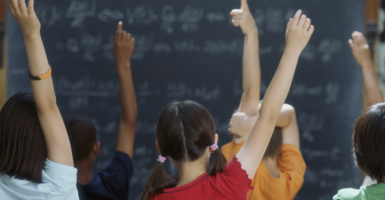 In a lawsuit filed Wednesday, parents represented by Alliance Defending Freedom accuse a Virginia school system of indoctrinating students with an ideology that “teaches children to affirmatively discriminate based on race.” (Photo illustration: Getty Images)

A Virginia school district is indoctrinating students with an ideology that “teaches children to affirmatively discriminate based on race,” nine parents and eight minors allege in a new lawsuit.

In their lawsuit, the parents accuse Albemarle County Public Schools of implementing an “Anti-Racism Policy” beginning in 2019 with a stated purpose of eliminating “all forms of racism” in the school system near Charlottesville, Virginia.

This policy is “racist at its core,” according to the lawsuit, which asks the court for an order that would stop the Albemarle school district from implementing this policy.

“Defendants claim that they want to stand against racism,” the lawsuit says. “But rather than eliminate racism from the school district, defendants have done the opposite.”

Albemarle County Public Schools did not immediately respond Wednesday afternoon to requests for comment from The Daily Signal.

>>> Update: On Thursday, Haas and the Albemarle school system’s communications officer, Phillip Giaramita, told The Daily Signal that they had no information about the lawsuit. Pressed to comment on The Daily Signal’s report on what the lawsuit alleges, Giaramita declined, saying that “we do not think it is helpful to comment on media reports of what is in a lawsuit when we have not yet had the opportunity to review the lawsuit itself.” <<<

According to the suit, both the policy and the curriculum implemented by the school district “indoctrinate children in an ideology” forcing students to view everything through the lens of race.

“Far from exploring ideas or philosophies surrounding justice and reconciliation, that ideology fosters racial division, racial stereotyping, and racial hostility,” the lawsuit says. “So does the policy. Through the policy, defendants incorporate these pathological teachings into the school district’s programming and treat students differently based on race in direct conflict with Supreme Court precedent and the Virginia Constitution and state law.”

Defendants have reached this anomalous result by embracing a radical new understanding of ‘racism’ that harms and denigrates everyone. This new understanding classifies all individuals into a racial group and identifies them as either perpetually privileged oppressors or perpetually victimized members of the oppressed, denying agency to both. It assumes that racism terminally infects our social institutions, requiring their dismantling. And it imputes racism not only to those who consciously discriminate based on race, but also to those of a certain race (white) who do not actively participate in the prescribed dismantling.

Ryan Bangert, senior counsel and vice president for legal strategy at Alliance Defending Freedom, told The Daily Signal on Wednesday that the lawsuit raises pivotal questions about the proper role of parents in their children’s education.

“What role do parents play?” Bangert asked. “That was a really big part of what we just witnessed back in November in the Virginia gubernatorial election.”

“The problem we have here is these parents … have repeatedly brought their concerns to the school administrators, the school board, and expressed their concerns about this curriculum and they’ve been ignored,” Bangert said. “And this lawsuit is a way in which these parents are taking back control of their kids’ education. As Virginia law allows them to do, as Virginia law empowers them to do.”

The plaintiffs named in the lawsuit “come from a wide range of backgrounds,” the legal filing says. But they are united, according to the lawsuit, in the “common goal of eliminating racial discrimination in Albemarle schools.”

Nine parents are named in the lawsuit, but their names are redacted to preserve their anonymity. The filing describes at length the sacrifices made by these parents to safeguard their children’s education and to place their children in positions best suited for them to succeed as adults.

One set of parents left their jobs and moved from Georgia to Virginia to take advantage of the highly rated Albemarle County Public Schools system. The father of the family “was unemployed for two years as a result,” the lawsuit says.

Yet because of “racial discrimination” in the school district, according to the filing, the parents are considering withdrawing their children from the schools, “though they moved to Albemarle County precisely for those public schools.”

The first set of parents named in the lawsuit immigrated to the U.S. from Panama, “leaving behind family and a familiar way of life in search of a better life for their family and in pursuit of the American Dream.”

“Through hard work and dedication, they built a successful business and successful careers,” the lawsuit said, adding that the family believes, based on past experiences, “that in America, hard work will lead to success and that anyone, regardless of race, color, or creed, can accomplish his or her dream.”

This family has a son enrolled at Western Albemarle High School and a daughter enrolled at Henley Middle School, both part of the Albemarle school system. Both children have received classroom instruction on “anti-racism,” according to the lawsuit.

The students “share their parents’ belief that hard work leads to success, and that the American dream is for everyone,” the lawsuit says. Because of this, they found this “anti-racism” instruction “confusing” and “disturbing.”

“They also do not know where they fit into this new ‘anti-racism’ ideology,” the lawsuit says. “Their racial background would render them underprivileged by defendants’ standards, but their religious beliefs and economic status would suggest privilege instead.”

As superintendent and assistant superintendent, Haas and Hairston implemented the “Anti-Racism Policy” in the district’s schools, according to the lawsuit. The suit notes that Hairston was involved in developing the policy.

In a new curriculum created under the policy and taught to eighth graders in the spring, according to the lawsuit, school system officials rejected “the idea that racism is a malady of character that can affect any human heart.”

“Rather,” the lawsuit says, “they embrace the idea that racism mainly exists in some institutions and some people groups, instructing students that ‘racism’ is ‘the marginalization and/or oppression of people of color based on a socially constructed racial hierarchy that privileges white people.’”

Teachers must go through training focused on “white privilege,” the suit says. This training states that white teachers need to be pushed to consider “privilege systems, whiteness, [and] race” to understand “systemic white racism.”

The Albemarle school district also urges students to examine their privilege and to strive to be “anti-racists,” according to the lawsuit, because “[i]n the absence of making anti-racist choices, we (un)consciously uphold aspects of white supremacy, white-dominant culture, and unequal institutions and society.”

“It recruits these kids into becoming activists for this ideology,” Bangert told The Daily Signal, adding:

It’s an ideology of resentment, of division, of racial grievance. And it hurts everyone. Let’s be fair here. This is not hurting only white students, it hurts all the students because it categorizes students and labels them based solely on their race.

This report was updated within 20 hours of publication to include a response from Albemarle County school officials.