Find Out Which States Best, Worst for Honest Election Laws 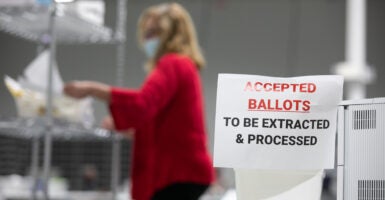 Georgia ranks at the top among states for the strongest laws in the nation to guarantee honest elections, while Hawaii ranks at the bottom, according to a new Election Integrity Scorecard from The Heritage Foundation.

Heritage’s scorecard, announced Tuesday, measures all 50 states and the District of Columbia based on a dozen election-related categories.

Categories in which scores may reach between 20 and 30 points are voter ID requirements, maintaining accurate voter registration lists, and rules governing absentee ballots.

A perfect overall score in providing for honest elections would be 100, meaning a top score in all 12 categories. Georgia had a total score of 83, while Hawaii’s score was 26.

“Americans need and deserve elections that they can trust,” Heritage Foundation President Kevin Roberts said in a press release, adding:

Heritage’s Election Integrity Scorecard gives states a better idea of how their state laws and regulations compare to best practices and where they need improvement. In the coming weeks and months, Heritage will work with our state partners to ensure policymakers and officeholders have this valuable information to make reforms. At a time when cynicism runs deep on both ends of the political spectrum, the need to protect the people’s elections, and to safeguard the value of every citizen’s vote, couldn’t be clearer.

Heritage’s scorecard comes at the end of a year in which at least 18 states enacted significant election reform legislation. Although Republican lawmakers led many of those state reforms, the best and worst states as determined by the scorecard didn’t break down entirely along partisan lines.

For example, liberal-leaning Wisconsin, where a Democrat is governor, made the Top 10 for best states, while the staunchly conservative states of Utah and Nebraska are ranked in the 40s. So are Massachusetts and Vermont, two liberal-leaning states with Republican governors.

Kansas and Missouri tie for 10th place overall. based on their total scores in all the categories.

“No matter one’s politics, every reasonable American agrees that our electoral process should make it easy to vote and harder to cheat,” John Malcolm, director of the Meese Center for Legal and Judicial Studies at The Heritage Foundation, said in a formal statement on the scorecard, adding:

The right to vote is a sacred right that our leaders must protect. The Election Integrity Scorecard is the result of an intensive, in-depth review of state election laws and will provide voters, legislators, and election officials with a tool that can be used to compare their election system to a model system and that of other states. The model bills we provide can be used to improve their elections to guarantee both access and security. We strongly urge them to do so.

Other categories measured in the scorecard, with a maximum score of no more than 4 points each, are: rules governing ballot harvesting and vote trafficking; access of election observers to ensure transparency; citizenship verification; rules on voter assistance procedures; vote-counting practices; election litigation procedures; rules governing voter registration; restriction of automatic registration; and rules surrounding the private funding of elections.

Currently, 35 states have some form of voter ID laws to ensure voters are who they say they are, but with varying degrees of implementation.

Alabama, Arkansas, Georgia, Kansas, and Tennessee received the highest score of 20 points for implementation of voter ID laws. States with 0 points on this front are Hawaii, Maine, Nebraska, and Vermont.

“Heritage has been working for many years to protect the integrity of our elections in order to ensure that all eligible Americans are able to vote and that their votes are counted honestly [and] fairly, and are not diluted by fraud, errors, or mistakes,” Hans von Spakovsky, manager of The Heritage Foundation’s Election Law Reform Initiative and a former member of the Federal Election Commission, said in a formal statement. “Our new Election Integrity Scorecard, along with the Heritage Election Fraud Database, will help ensure that happens.”

The scorecard also ranks states on how up to date their voter registration lists are—and whether dead people or those who have moved out of the precinct or state are still listed.

Interestingly, states with a lower overall score and ranking in the bottom half of the list do relatively well in the category for accuracy of voter registration lists.

Maryland (ranked 29 overall) gets 27 points out of a maximum of 30 in this category of accurate registration lists, while Colorado and Washington (34 and 45 overall, respectively) get 26 points.

Maine and Rhode Island (32 and 16 overall, respectively) get 25 points. At the bottom, North Dakota gets 9 points in this category, just below Hawaii, the scorecard’s overall worst, with 13 points.

Management of absentee ballots is a category with a maximum of 21 points that measures how well states authenticate absentee and mail-in voting. This category is tied closely with voter registration maintenance.

In 2005, the Carter-Baker Commission report stated that absentee voting was the aspect of elections most vulnerable to fraud.

Louisiana and Oklahoma got the strongest score on managing absentee ballots, with 19 points each. They are followed closely by Alabama, Minnesota, Missouri, and Rhode Island, with 18 points each.

Ranked at the bottom in managing absentee voting are California, with just 2 points, Nevada with 3, and Washington with 4.

The website notes that the right to vote is sacred and has faced numerous challenges throughout history, with the biggest current challenge being the integrity of the vote:

The fight for the right to vote is a storied part of America’s heritage. From the revolutionary cry of ‘no taxation without representation,’ to the marches of the suffragettes, to the struggle against Jim Crow laws, America’s successful efforts to expand and defend the right to vote are some of our nation’s greatest triumphs. …

Thankfully, we now live in a time when no serious person would dare to claim that any group of people should be denied the right to vote based on their race, sex, or any other immutable characteristic. But celebrating that triumph does not mean that the fight to defend the vote is finished. Our fight today is to preserve the integrity of each vote against fraudulent attempts to erase it.

This report was updated within three hours of publication to include the statement from Heritage’s Kevin Roberts.