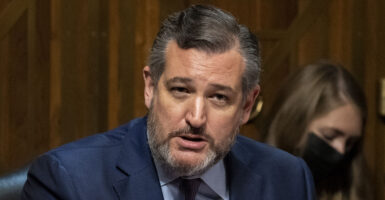 Voter ID laws are racist in Texas and could be in other states as well, depending on intent, three Democrat witnesses said Wednesday at a Senate hearing.

One Democrat witness said it’s difficult to say whether voter ID requirements have had any harmful effect, but requiring voters to show photo identification isn’t likely to prevent election fraud because fake IDs are easy to obtain.

The hearing convened by the Senate Judiciary Committee’s subcommittee on the Constitution, titled “Restoring the Voting Rights Act: Combating Discriminatory Abuses,” was supposed to look at legislation known as HR 4, which would allow the Justice Department to prohibit implementation of state election laws.

But much of the discussion of HR 4, called the John Lewis Voting Rights Advancement Act, focused on voter ID.

Most state election reforms opposed by Democrats have revolved around voter ID, generally by expanding identification requirements to absentee or mail-in ballots. Senate Democrats called three witnesses for the subcommittee hearing, while Republicans had two.

Noting that voter ID laws are popular with voters of all demographics, Sen. Ted Cruz, R-Texas, asked each witness, “In your judgment, are voter ID laws racist?”

Franita Tolson, a vice dean at the University of Southern California Gould School of Law, was rather blunt about Cruz’s state.

“It depends. One thing we have to stop doing is treating all voter ID laws as the same,” Tolson said.

When Cruz pressed her, she said: “Apologies, Mr. Cruz, [in] your state of Texas, perhaps. … The fact that the voter ID law was put in place to diminish the political power of Latinos with racist intent.”

Tolson said her evidence was a federal district court ruling that first resolved the constitutionality of Texas’ voter ID law.

“Particularly because every single state that has passed an ID law has put in a provision to provide a free ID to anyone who doesn’t have one,” von Spakovsky said, adding:

The turnout numbers show it has no effect.

I would remind everyone that [as for] the current version of the Texas voter ID law for its in-person voting, the Obama administration agreed in court, in a court filing, that they were satisfied with it and it was not discriminatory.

Currently, 35 states have voter ID laws, according to the National Conference of State Legislatures.

Another witness for Democrats, John Yang, president of the group Asian Americans Advancing Justice, answered Cruz’s question with some uncertainty.

Without giving any examples, Thomas Saenz, president of the Mexican American Legal Defense and Education Fund, was a bit more definitive in answering Cruz.

“There are some voter ID laws that are racially discriminatory in intent,” Saenz said.

Cruz followed up by saying: “Let’s just talk about it as a practical matter. When I go to vote, they ask me for my ID. I pull out my ID. I show it to them. I vote. Is that racist?”

“If the law that requires you to do that was motivated by racially discriminatory intent under our Constitution,” Saenz said, adding later: “In effect, I think there are discriminatory effects in a number of voter ID laws.”

Subcommittee Chairman Richard Blumenthal, D-Conn., seemed to try to clarify what the witnesses were saying.

“My interpretation of your testimony is that you would approve or disapprove of voter ID laws and think they pass muster on the Constitution depending on the law, depending on its provisions, depending on its intent and its effect,” Blumenthal said. “As you know—most of us in this room are lawyers—that’s how you judge laws. You read them and then you judge them on their effect, impact, and their intent. Is that a correct interpretation?”

Later on in the hearing, Sen. Alex Padilla, D-Calif., who joined the Senate in January and previously oversaw California’s elections as secretary of state, asked whether voter ID was harmful.

“Is there any data that you can point us to that suggests that voter ID is actually a solution to a problem, or is it a solution in search of a problem?” Padilla asked. “Does voter ID do more good in preventing voter fraud or more bad, in terms of making it harder for eligible people to vote or actually disenfranchise eligible voters from participating?”

After testifying earlier that at least some voter ID laws had racist intent, Saenz responded by saying it’s unknowable if any were harmful or helpful:

It’s hard to demonstrate any of that, because there is no evidence of significant voter fraud. So it is a problem that doesn’t exist. So how do you demonstrate that you are actually addressing that? I would point out that anyone who is really interested in engaging in fraudulent voting, an ineligible voter can very easily obtain a fraudulent ID. It’s not hard.

Digressing a bit from the focus of the hearing, Padilla said Congress should focus on transgender voting rights, as California has.

“In California, we have been working with advocacy organizations to provide better training for poll workers to better serve the LGBTQ community, particularly trans voters, eligible voters, citizen who may not present themselves in person when they come to vote in the same way they appear on a voter registration roll or even on their ID when showing up to vote in a voter ID state,” Padilla said. “So, some work needs to be done, some best practices [need] to be researched, and [I] would love to bring forward some opportunities to buttress that nationally, not just in California.”

During his testimony, Heritage’s von Spakovsky said that it is “simply false” to claim there is a “wave of voter suppression going on across the country that requires expansion” of the Voting Rights Act.

“Efforts to enhance the integrity of the election process through reforms such as voter identification requirements and improvements in the accuracy of statewide voter registration lists are not voter suppression,” von Spakovsky said, adding:

On voter ID, for example, the data is clear that such a requirement does not prevent any eligible individuals from voting, and yet the proposed legislative reforms treat it as a suspect, discriminatory practice. A 2019 survey of 10 years of turnout data from all 50 states found that state voter ID laws have no negative effect on registration or turnout, overall or for any group defined by race, gender, age, or party affiliation.

Democrats shifted focus to HR 4, which would grant the Justice Department essential veto power over state election laws, after first pushing a bill known as HR 1 to gut voter ID laws and expand the controversial practice of ballot harvesting.

Democrats failed to overcome a Senate filibuster on HR 1.

The danger is giving too much power to the Voting Section of the Justice Department, said Maureen Riordan, litigation counsel for Public Interest Legal Foundation and formerly a lawyer in that section.

Riordan, Republicans’ other witness besides von Spakovsky, said she witnessed partisan bureaucrats in the Voting Section who abused their power and would gain almost “limitless power” under HR 4 as written.

I also witnessed twisted racialism. When George W. Bush appointed Ralph Boyd, an African American, to head the Civil Rights Division [of the Justice Department], I often heard from career Voting Section attorneys [that] ‘He’s not really black,’ adding that ‘No self-respecting black man would be a Republican.’ Such statements represent accepted beliefs by most staff attorneys.

Riordan urged senators to read a 2013 report by the Justice Department’s Office of Inspector General about the Voting Section that includes examples of politicized and racially motivated behavior.

She also noted that from 1993 through 2000, the Voting Section was sanctioned by courts to pay a total of $2.3 million in civil cases because of its conduct.

Cruz, the subcommittee’s ranking member, later quoted the late Supreme Court Justice John Paul Stevens, who in 2008 wrote the majority opinion in a 6-3 decision upholding voter ID, and also the Carter-Baker Commission report in 2005, which called for voter ID requirements.

Earlier in the hearing, Blumenthal said he was proud that his home state of Connecticut had acted to expand voting rights on a bipartisan basis. He characterized Southern states as making it more difficult to vote.

“So, apparently the views of President Jimmy Carter, the views of a six-justice majority of the Supreme Court, are deemed to be, by some members of this committee, simply a partisan diatribe,” Cruz said. “If that’s the case, I would ask the chairman: You talked about the laws in Connecticut. Why is it that Connecticut has lower African American registration and lower African American turnout than Georgia and Mississippi?”

Blumethal responded: “You know, I’m really not here to debate you, Mr. Cruz. I subscribe to Justice Stevens’ opinion and to the views of former President Carter, a distinguished Southerner.”

Cruz shot back: “That speaks volumes.”

Have an opinion aboout this article? To sound off, please email letters@DailySignal.com and we’ll consider publishing your edited remarks in our regular “We Hear You” feature. Remember to include the URL or headline of the article plus your name and town and/or state.