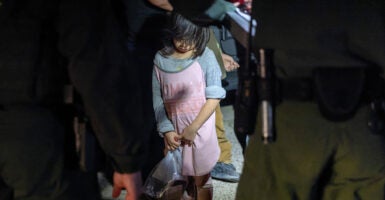 “These kids are in the care of our country, and we can’t tolerate the kinds of abuse these entities have overlooked in the past,” Sen. Chuck Grassley, R-Iowa, tells The Daily Signal. Pictured: A 4-year-old girl from Honduras waits at a Border Patrol checkpoint Aug. 14 after crossing the Rio Grande from Mexico into Roma, Texas. (Photo: John Moore/Getty Images)

A month after the Senate issued a bipartisan report flagging oversight failures by government contractors that house migrant children, the Biden administration awarded new contracts worth tens of millions of dollars to two of those organizations.

“The fact that taxpayer money keeps flowing without any guarantee of reforms or commitments to improving facility oversight from [the Department of Health and Human Services] is just unacceptable,” Grassley told The Daily Signal in a statement late Friday.

Grassley worked with committee Chairman Ron Wyden, D-Ore., on a report released Oct. 28 that details allegations of child abuse at federally funded facilities and substandard protections provided for children who illegally entereed the country by crossing the southern border.

As The Daily Signal reported last week, the Department of Health and Human Services awarded a contract worth $178 million to Southwest Key Programs and two contracts worth $77.5 million to BCFS Health and Human Services. Both nonprofits were cited in the Senate report for major problems in accounting for children and finances, as well as in past inspector general reports.

The three HHS contracts, to run a total of four shelters for migrant children in Texas, went into effect Nov. 30—a month after the Senate report. The increased need for housing for unaccompanied children comes amid a crisis in which illegal immigrants are pouring across the southwest border.

The Senate report, which examined data from 2014 to 2020, asserted that the HHS Office of Refugee Resettlement failed to conduct the basic oversight needed to ensure the safety of children in its care. The report cited extensive record-keeping deficiencies and lack of a clear framework for taking action when serious incidents occur.

“These kids are in the care of our country, and we can’t tolerate the kinds of abuse these entities have overlooked in the past,” Grassley said in his statement to The Daily Signal. “We’ve also yet to hear from HHS about concrete plans to improve accountability and supervision after Sen. Wyden and I published our investigation and provided recommendations.”

The report from Wyden and Grassley made seven recommendations, the first being that HHS’ Office of Refugee Resettlement “compel grantees and contractors to prioritize the safety and well-being of children in their care, including financial drawdowns and the discontinuation or non-continuation of grants/contracts to providers that do not effectively safeguard children in their care.”

The bipartisan report said that the Office of Refugee Resettlement’s monitoring is based on individual case management records and found that the agency is unable to track historical trends for contractors:

Not only does this mean that ORR fails to effectively address ongoing systemic threats to children’s well-being, but also that it is inherently incapable of quantitatively assessing grantee/contractor operations. This poses a troubling barrier to the long-term improvements in the quality of care that ORR can guarantee, as it is unable to determine whether a grantee or contractor has a history of being compliant, competent, or suitable for additional grants or contracts.

Southwest Key Programs, which most recently was awarded the $178 million contract from HHS to run the Texas shelters, referred questions from The Daily Signal to the Office of Refugee Resettlement.

Southwest Key Inc. is by far the largest provider of care for the children in ORR custody. The company currently operates 17 facilities in Texas, eight in Arizona, and two in California.

In fiscal year 2019, it received over $600 million in UAC [unaccompanied children] program funding across all of its facilities. As noted earlier, it also reported the worst annual record of sexual misconduct SIRs [significant incident reports] between 2016 and 2020, from among all of ORR’s grantees.

However, since at least fiscal year 2014, Southwest Key has not been subject to any punitive actions by ORR that halted its operations to a large degree, despite a history that calls into question its ability to keep each and every child safe and healthy.

The Senate report said HHS’ refugee agency did not stop placement of migrant children at Southwest Key facilities in Tucson, Arizona, even after youth case workers were charged with and later convicted of abuse of a minor.

The report also noted more than 300 state violations in the Texas facilities, including failure to conduct background checks, which resulted in a caseworker being hired despite a previous arrest for child pornography.

The report says Southwest Key had 900 reported incidents of alleged abuse at its facilities from 2014 to 2020.

The Senate report also cited BCFS Health and Human Services, which got the $77.5 million contract from the Biden administration’s HHS to run two shelters for migrant children in Texas, as being among entities that reported more than 200 incidents of abuse of children in custody.

Last week, spokeswoman Evy Ramos told The Daily Signal that the nonprofit “goes above and beyond for those entrusted to our care,” and added: “BCFS HHS was one of the few, if not the only, organization able to provide the immediate services needed to ensure that ORR is able to meet its responsibility, by law, to provide shelter and appropriate services for [unaccompanied children] referred to its care by the Department of Homeland Security.”

The other recommendations from the Senate report were to “create a public framework grading ORR unaccompanied migrant children grantees and contractors,” to “improve guidance to grantees and contractors for significant incident reporting,” and to “adopt a data management system capable of tracking and comparing across facility and grantee/contractor-level operations, including historical records of compliance, violations, and all significant incidents that have occurred.”

Grassley and Wyden also called for HHS’ Office of Refugee Resettlement to “identify and address problematic trends … rather than treat incidents as isolated episodes,” and to “improve communication and coordination with local, state, and other federal agencies involved in licensing or investigating providers that operate ORR-funded facilities.”

Upon release of the Senate report, Wyden slammed “poor oversight by ORR that has exposed vulnerable kids to unacceptable risk of abuse.”

“Unaccompanied children have already faced so many challenges and often significant trauma during their journeys to the United States,” the Oregon Democrat said in a public statement, adding:

The federal government must do all it can to protect them while they are in our care. It is critical that ORR act urgently to develop a better view of what is happening in its facilities and put systems in place that ensure the safety and well-being of all children in its care.