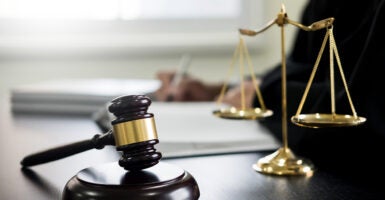 The nation’s largest teachers union sued a Rhode Island mom for trying to find out what her daughter would be taught. Now, she’s asking a judge to dismiss the union's lawsuit. (Photo illustration: Audtakorn Sutarmjam / EyeEm / Getty Images)

A mother’s fight for transparency in public schools continues in a Rhode Island courtroom.

“Parents have an absolute right to request public information about public education and what their children will learn in school,” Nicole Solas, a mother of two young children, told The Daily Signal in an email Thursday.

The state affiliate of the National Education Association, the largest teachers union in America, sued Solas, a resident of South Kingstown, which is 30 miles south of Providence, Rhode Island.

The union’s suit, filed in August, came after Solas filed more than 200 requests for public records about the curriculum being taught in her school district and what her kindergarten daughter would learn.

Solas is fighting the lawsuit with the help of the Goldwater Institute, a conservative public policy and ligation organization based in Phoenix. Goldwater attorney Jon Riches, representing Solas, asked Wednesday that the Rhode Island Superior Court dismiss the lawsuit.

>>> Related: Mom Says School Board Threatened to Sue Her for Seeking Public Information on Critical Race Theory in Curriculum

“Private parties have no legal standing to disrupt the statutory public records process,” Riches told The Daily Signal during a phone call Thursday.

Because the teachers union is a private party, he said, the National Education Association Rhode Island has “no legal basis for” interfering.

Secondly, Riches argued during the virtual hearing, Solas’ actions are protected under state law governing so-called strategic lawsuits against public participation, known as SLAPP suits. The statute protects citizens from the threat of retaliatory litigation for engaging on issues of public concern.

“We asked the court to find that the anti-SLAPP statute applies, and to award [Solas] attorneys fees and damages against the union,” Riches said.

Solas said she is “hopeful the court will prevent the union’s abusive tactics in this case, and set an example for other special interest groups that might also attempt to interfere with the public’s right to know what its government is up to.”

Iafrate also said the only reason the teachers union included Solas in the lawsuit is that the law requires all parties of interest to be named.

But the union has “no legal justification to bring the lawsuit in the first case,” Riches told The Daily Signal, adding that he finds the union’s argument for why Solas was named in its lawsuit to be “highly suspicious.”

The suit is nothing more than “pure harassment and intimidation tactics,” Riches said.

The National Education Association Rhode Island did not respond to The Daily Signal’s request for comment.

Sloan appeared to have a good understanding of the law and the issues at hand, Riches said, adding that he is optimistic that the judge will conclude the union’s lawsuit is baseless.

Sloan is expected to announce her ruling sometime before Dec. 20.

Even if her motion to dismiss the lawsuit is denied, Solas said, “we will continue to defend this case to the end to protect our right, and other parents’ right, to receive public information.”