School Choice Denied to Most Rhode Island Families, but Not These Union Teachers 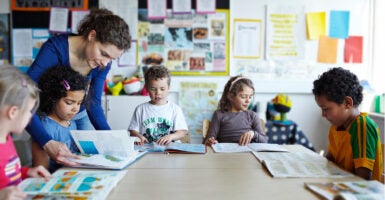 A "secret deal" between a teachers union and a school district allows teachers, but not other parents, to send their children where they choose. (Photo illustration: Klaus Vedfelt/Getty Images)

A local chapter of the nation’s largest teachers union has acknowledged the importance of school choice, at least for its own members.

Thanks to an agreement quietly reached between the South Kingstown, Rhode Island, chapter of the National Education Association and the South Kingstown School Department, teachers there now have access to an exclusive school choice program.

Under the formal agreement, teachers who live outside the South Kingstown Public Schools district may send their children to schools there at no additional cost.

Other parents outside the school district, however, cannot do the same for their children.

About 2,800 students are enrolled in the South Kingstown district, which has seven schools.

“The union is saying—loudly—‘Choice for me but not for thee,’” Lindsey Burke, director of the Center for Education Policy at The Heritage Foundation, told The Daily Signal in an email Tuesday.  (The Daily Signal is Heritage’s multimedia news organization.)

The agreement between the teachers union and the school district “is an admission that school choice is important,” Burke said in the email, adding that “[a]pparently, the unions have finally come around to the notion that money should follow the child to the school that fits her needs!”

School Superintendent Linda Savastano and Brian Nelson, head of the NEA chapter in South Kingstown, signed the agreement June 24. Savastano resigned from the school district four days later amid controversy over her releasing students’ addresses for mailing political material that sought parents’ support for a $85 million school bond on the ballot.

“Many residents in my town believed that this was an agreement signed by a superintendent who made one last backdoor deal before walking out the door,” South Kingstown mom Nicole Solas told The Daily Signal in an email Tuesday.

South Kingstown, a town of about 32,000, is the county seat of Washington County, Rhode Island. It includes 11 villages, among them Kingston, West Kingston, and Wakefield.

Officials did not publicize the pact between the teachers union and the South Kingstown School Department. The Daily Signal learned about the memorandum of agreement from Solas and Goldwater Institute, a conservative public policy and litigation organization based in Phoenix.

A local teacher told Solas about the agreement, and the mom shared the information with Goldwater Institute.

Solas told The Daily Signal that she was able to find the agreement on the school district’s website, but it was “posted in a place where the average resident would not look, because public documents about school business are posted in an entirely different part of the website.”

“It looks like it was deliberately buried and hidden,” she said.

In a recent blog post, Goldwater Institute called the agreement between the school district and the teachers union “a secret deal,” raising questions about the  transportation policy specified in the document.

“Under no circumstances will the district be responsible for the transportation of any student enrolled under this provision,” the agreement reads.

Goldwater Institute points out that “transportation falls under the scope of the Rhode Island Department of Education, not the [school] district.”

“If this agreement were meant to fly under the radar, keeping transportation off the books is a fine idea,” the research organization wrote.

South Kingstown’s interim superintendent, Frank Pallotta, did not respond to The Daily Signal’s request for comment.

For most families, though, South Kingstown Public Schools requires parents to prove they live within the district before their children can attend school there. If a school discovers a family lives outside the district, that family could be “responsible for the payment of tuition under penalty of law,” according to the district’s residence policy.

But during the COVID-19 pandemic, teachers who taught in South Kingstown but lived outside the district ran into issues when they had to return to work while their child still attended school remotely, Solas told The Daily Signal.

The agreement signed by the teachers union and the school district in June made a temporary provision permanent.

“The teachers who live outside South Kingstown should absolutely have the chance to send their kids to its schools,” Matt Beienburg, director of education policy at Goldwater Institute, told The Daily Signal.

But, Beienburg said, the issue with the agreement is that it provides the local union members with a “special privilege” that is “denied to all other families.”

The agreement “is yet another example of the blatant hypocrisy of unions and their political backers, who are happy to utilize school choice—even private schooling—for their own kids, while fighting tooth and nail to block other families from the same opportunities,” Beienburg said.

The Rhode Island state chapter of the National Education Association did not respond to The Daily Signal’s request for comment.

“Now we see that even the school district will collude with the union to misappropriate taxpayer funds earmarked for students,” she said.

As previously reported by The Daily Signal, Solas, the mother of two young children, became a spokeswoman for education transparency in her community and across America earlier this year, when she stood up to the South Kingstown school board after it threatened to sue her for requesting public records.

Solas filed the requests to learn whether her kindergartener would be taught critical race theory and gender identity ideology in school. She ultimately chose to enroll her daughter in a private school after facing hostility from the school board.

In August, the South Kingstown and Rhode Island chapters of the National Education Association filed a lawsuit against Solas over her requests for school district documents. Goldwater Institute is defending Solas in the suit.

Her discovery of the unpublicized agreement between the teachers union and public school officials is “just one more piece of evidence demonstrating that your school district cannot be trusted,” Solas said.