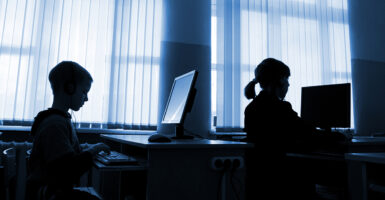 The National Education Association, America’s largest teachers union, is suing a Rhode Island mom for seeking information about what her kindergartener will be taught in school.

“It appears … [the teachers union wants] a court to say I can’t get the public information that I’m requesting because it will somehow harm teachers,” Solas told The Daily Signal in a phone interview Thursday.

The complaint was filed with the Rhode Island Superior Court on Monday and a constable arrived at Solas’ home on Wednesday to deliver papers informing the mother of the lawsuit.

“I just got served with a lawsuit from the teacher union, NEARI,” Solas wrote on Twitter. “Throwing down the gauntlet, are we? Game on.”

On Thursday, the union also filed for a temporary restraining order and preliminary injunction against Solas. The legal action is intended to prohibit the South Kingstown school board from “responding to public record requests referenced in the Verified Complaint, unless and until a determination can be made that such documents are required to be released pursuant to the Access to Public Records Act,” the court filing reads.

“Today, the teacher union NEA filed ANOTHER lawsuit against me – this time a Temporary Restraining Order and Preliminary Injunction,” Solas tweeted. “Will teacher unions bullying moms be an everyday thing now?”

Over the past few months, Solas has filed more than 200 public records requests with the South Kingstown School District, about 30 miles south of Providence, Rhode Island.

In April, the principal of the elementary school told Solas to file records requests after the mother emailed the principal asking for a copy of the curriculum and other information about the school district.

Solas was told that due to the breadth of her questions, she needed to file records requests, which she did.

The teachers union is asking the court to “prohibit the disclosure of non-public records” and for the court to use a “balancing test” to assess whether or not teachers’ “personally identifiable and other personnel-related information” must be released, according to the complaint.

The National Education Association Rhode Island “laid out a lot of reasons [in the complaint] why some of the information I requested may not be subject to public disclosure, but that is all controlled under the Rhode Island Access to Public Records Act, and the School Committee attorneys would be making all those decisions themselves,” Solas said.

She added that if the “teachers union believes that the School Committee attorney made a wrong decision on the release of information, the teachers union can certainly sue the school.” Instead, Solas is the one being sued.

“I think this is purely an intimidation tactic,” Solas said of the lawsuit.

The complaint is outlined in 70 points detailing why the information Solas is requesting should not be released, including concerns over a conservative group’s reporting of educators teaching critical race theory.

Given the circumstances of the requests, it is likely that any teachers who are identifiable and have engaged in discussions about things like critical race theory will then be the subject of teacher harassment by national conservative groups opposed to critical race theory.

Appendix C of the complaint includes two news stories covering the South Kingstown school board’s threat to sue Solas in June. The first is from Legal Insurrection, which first covered the story, and the second is from The Daily Signal.

Solas says that it appears that the teachers union is seeking to act as a “third-party intermediary” to decide whether or not she can receive the public information she is requesting.

“I hope teachers see this lawsuit as the last straw of their union’s decades-long denigration of their profession,” Solas said. “I hope teachers leave the union because they refuse to fund litigation that harasses and bullies mothers who exercise their civil right to access public information about their children’s education.”

The young mom is being represented by the Goldwater Institute, a conservative public policy and ligation organization based in Phoenix.

“Rhode Island law does not authorize what the [National Education Association] is attempting to do here,” Goldwater lawyer Jon Riches told The Daily Signal in a phone interview Thursday.

The Daily Signal reached out to the National Education Association Rhode Island for comment and received a prepared statement in response with a quote from Deputy Executive Director Jennifer Azevedo.

We are asking the Court to conduct a balancing test to determine whether our members’ privacy rights outweigh the public interest. We believe they do, and those records should either not be disclosed or should be redacted accordingly.

Multiple APRA requests were made in recent months to the South Kingstown School Department demanding detailed information about specific educators and members in general of NEA South Kingstown, our local NEARI educator affiliate.

While NEARI and NEASK support access to public information, the organizations firmly believe in protecting the rights, safety, and privacy of its members and will continue to advocate strongly on their behalf. We look forward to the Court’s declaratory judgement.

“As long as such information does not include ‘personally identifiable information,’ which legally must be kept confidential, the NEA’s request for a behind-closed-doors review with the judge in this case, in addition to previous statements about wanting not to distract from ‘equity efforts’ by fulfilling Solas’ requests, indicates that whatever the school board is teaching, it very much wants to hide,” Sarah Parshall Perry, a legal fellow at The Heritage Foundation, told The Daily Signal. (The Daily Signal is the news outlet of The Heritage Foundation.)

Even though Solas has now enrolled her daughter in a private school, both she and the Goldwater Institute are prepared to move forward with the lawsuit in an effort to stand up for parents across the nation who are concerned about their child being taught critical race theory and other leftist ideology in the classroom.

“They made the wrong mom mad,” said Solas, who added that the fight is about so much more than simply her own records requests.

This is about parents having a right to know what their child’s education is. This is about not being bullied by a teacher union who wants to challenge a stay-at-home mom for asking questions about education. And this is about open government.

The actions of the teachers union are “unacceptable,” Riches said. “It’s not going to stand. We are going to fight back every step of the way. Nicole is not going to be intimidated.”

Correction: This piece was corrected after publication to accurately state that the lawsuit was filed in the Rhode Island Superior Court.