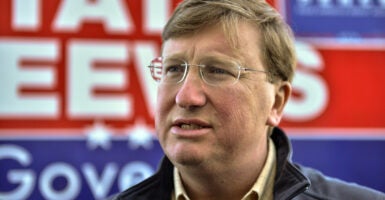 Mississippi Gov. Tate Reeves, a Republican, defends his state’s abortion law as “mainstream” rather than radical in an interview with The Daily Signal. Pictured: Reeves, then lieutenant governor, speaks to reporters Nov. 1, 2019, at BancorpSouth Arena in Tupelo. (Photo: Brandon Dill/Getty Images)

The law at the heart of a Supreme Court case to be heard Wednesday is much more mainstream than abortion proponents want Americans to believe, Mississippi Gov. Tate Reeves says.

“This particular law that is going before the court is actually much more in the mainstream of abortion law across the world than the current law in America that was decided because of Roe and Casey,” Reeves, a Republican, said in a Monday interview with The Daily Signal.

The Mississippi governor was referring to the Supreme Court’s prior decisions in the cases of Roe v. Wade and Planned Parenthood v. Casey, which essentially allowed abortion on demand across the nation.

The Supreme Court this week will examine a 2018 Mississippi law, the Gestational Age Act, which banned abortions after 15 weeks. The law never went into effect, blocked by a federal appellate court.

Reeves, who served as the state’s lieutenant governor at the time, applauded the legislation for “protecting the lives of unborn children.”

Abortion supporters claim that the Mississippi law is radical, Reeves said. But the governor insisted that abortion laws in New York and California are much more aligned with those of China and North Korea than with those of other countries throughout the world.

“I would argue that this 15-week abortion ban would make Mississippi much more in the mainstream of countries in Europe and across the globe,” he said.

The governor told The Daily Signal that he wants Mississippi to be “the safest place in America for an unborn child.”

“I’m probably public enemy No. 1 right now in America for the abortion on demand crowd,” Reeves said. “But my view is that I was elected to represent the people of Mississippi, and I can’t think of any more important group to represent than unborn children.”

I believe in my heart that if people like me don’t stand up for these unborn children, then we have to understand that they cannot stand up for themselves. Sixty-two million abortions have occurred since Roe was enacted in America… That’s what’s at stake in this case on Wednesday.

Reeves said he is “cautiously optimistic” as the Supreme Court prepares to hear arguments on Mississippi’s abortion law.

I certainly believe that when Roe was decided in 1973, that the court simply got it wrong. I think a simple reading of the Constitution showed that there is no guarantee right to an abortion in the United States Constitution. But also, I think even so, there’s nothing in the U.S. Constitution that would prevent states like Mississippi from placing reasonable limits on those abortions.

“So certainly the court could overturn Roe should they choose not to do that,” the governor continued. “They have the option, of course, to overturn the Casey decision.”

In the 1992 case of Planned Parenthood v. Casey, the Supreme Court reaffirmed but modified the constitutional right to an abortion that it declared in Roe v. Wade nearly 20 years earlier.

The Mississippi case, Reeves said, has the potential to “tilt the scale back to the side of the protection of life.”

“If we can move to a world in which we protect all innocent children that are unborn and cannot protect themselves, then we are moving to a much, much better world,” the governor said.