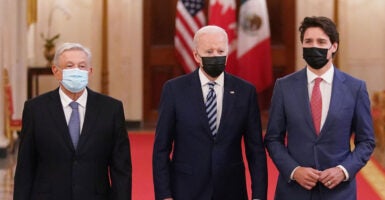 When President Joe Biden met Nov. 18 with Prime Minister Justin Trudeau of Canada and President Andres Manuel Lopez Obrador of Mexico at the White House, the meeting of the so-called “Three Amigos” was the first such North American Leaders’ Summit since 2016.

The leaders were expected to discuss a wide array of pressing challenges facing the region. No doubt, the migration crisis at the U.S.-Mexico border, pandemic recovery, the supply chain crisis and evidenced regional vulnerabilities, volatile energy costs, and other challenges in trade and security cooperation all presented an opportunity for a robust solutions-based agenda.

Beyond considerable attention placed on the pandemic and the announcement of a “coordination mechanism” to identify ways to strengthen regional supply chains, much of the focus of the summit was mired in left-wing talking points and an agenda that did little to offer concrete solutions to immediate challenges.

Problematically, of the 10 commitments made by the leaders on migration, not a single one of them made mention of the southern border or any efforts to strengthen law enforcement cooperation to reduce illegal immigration flows.

Instead, both Biden and Vice President Kamala Harris received praise from Lopez Obrador for proposed amnesty measures and resorted to rhetoric on the “root causes” of migration. That largely translates into a discussion on expanding traditional foreign aid programs, but ignores pressing concerns over lack of  security and economic freedom as genuine root causes of migration and the immediate border crisis.

Likewise, the summit missed the mark on tempering trade tensions among the three nations. Those tensions are, in part, worsened by the Biden administration’s trade and infrastructure policies. Mexico’s statist energy approach and industry renationalization, as well as Canadian barriers to dairy and lumber trade, are ongoing issues left largely unresolved. Biden ultimately failed to place those issues on the negotiating table.

When asked at the summit how he is navigating Canada’s and Mexico’s concerns over American protectionist policies, Biden hoped that Canada, Mexico, and the United States would talk, yet offered no path for liberalizing trade and resolving trade conflicts.

Canada and Mexico, in turn, expressed strong opposition to the electric vehicle tax credits included in Biden’s Build Back Better legislation due to its anticipated deleterious effects on the two countries’ automobile sectors and general trilateral automobile trade.

Since cars and trucks are the most traded manufactured goods in the region, clean energy protectionism in favor of unions over both consumers and manufacturers will remain a pressure point in the trilateral relationship following the summit.

Trudeau also raised concerns over the Biden administration’s Buy American executive order. Similar domestic-content rules were included for projects funded by the latest infrastructure bill, which will make it more difficult for Canadian and Mexican businesses to secure bids on procurement contracts.

That means that even if a business from one of our North American neighbors could offer a more competitive price for an infrastructure project, it likely would not be able to get the contract.

Notably, too, Biden also failed to make the shared challenge of a rising China a point of discussion for the summit. In their statements, only his Mexican counterpart made mention of China. The so-called deliverables included a laudable emphasis on prohibiting imports produced with forced labor, but otherwise failed to address geostrategic competition with China and its growing role in the region.

With a lack of resolution on some of the most significant crises facing North America and a general lack of discussion over shared geopolitical challenges, it’s a far stretch to call the meeting a success.