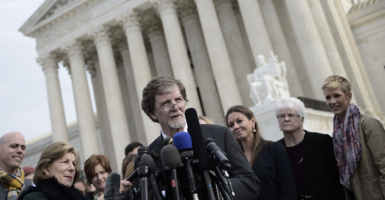 Sixteen attorneys general have filed an amicus brief in the contentious Masterpiece Cakeshop case, arguing that custom cakes are artistic works protected by the First Amendment.

“There are many costs of doing business but they do not include your civil rights,” Arizona Attorney General Mark Brnovich, who led the coalition of attorneys generals in filing the brief, said in a statement. “Small business owners maintain the ability to express themselves in their words and their work.”

“Mr. Phillips should not be compelled to use his creative talents to express a message he does not want to convey,” wrote the attorneys general of Alabama, Alaska, Arkansas, Kansas, Kentucky, Mississippi, Missouri, Montana, Nebraska, Ohio, Oklahoma, South Carolina, South Dakota, Texas, and West Virginia. “Not even public accommodation laws, as important as they are, can override the First Amendment.”

The suit centers on Masterpiece Cakeshop owner Jack Phillips, who declined to make a cake for a same-sex wedding in 2012 on religious grounds, and is now in court over declining to make a gender transition cake.

The Colorado Civil Rights Commission sued Phillips over his refusal to make a same-sex wedding cake and the Colorado Court of Appeals ruled that Phillips had violated the Colorado Anti-Discrimination Act. In June 2018, the Supreme Court held that the state had acted with “clear and impermissible hostility” toward Phillip’s religious beliefs, reversing the decision.

The Colorado Civil Rights Commission again sued Phillips in 2019, this time for declining to design a cake celebrating a gender transition. Phillips said that baking such a cake would “violate [his] religious beliefs” and “send a message to anyone that he would celebrate a gender transition,” according to a press release from the Arizona attorney general’s office.

A trial court found Phillips in violation of the Colorado Anti-Discrimination Act in the summer of 2020. But the attorneys general brief argues that the court should reverse this decision and hold that Phillips and Masterpiece Cakeshop are protected by the First Amendment.

“The district court held that pursuant to the Colorado Anti-Discrimination Act (‘CADA’), Colorado can force Jack Phillips and Masterpiece Cakeshop to create a custom-made cake designed to represent an individual’s gender transition—regardless of whether Mr. Phillips wants to express that message,” the attorneys general wrote.

“Mr. Phillips ‘has strong religious beliefs that it is not possible for a person to be transgender,’ and ‘[h]e and his wife do not believe that a person can transition from the gender assigned at birth,’” they continued. “Thus, creating a custom cake expressing a message of celebration of an individual’s gender transition is contrary to Mr. Phillips’ religious beliefs.”

The attorneys general noted that Colorado says the Colorado Anti-Discrimination Act requires Phillips to create this cake expressing a message that is contrary to his beliefs.

“The decision runs afoul of the Supreme Court’s repeated recognition that the First Amendment’s guarantee of freedom of expression protects a wide array of artistic works, and in turn, those works cannot be compelled,” they continued. “And recognition of this protection will not nullify a public-accommodation law such as CADA—it is only in narrow circumstances that commercial applications of public accommodation laws even implicate compelled-speech protection.”

“Had the Supreme Court ruled against Phillips, things would have gotten much worse for the millions of Christians, Jews, and Muslims whose religious beliefs about marriage are similar to Phillips’,” Alliance Defending Freedom senior counsel Jim Campbell wrote in a 2018 Daily Signal op-ed. “Such a ruling would have marginalized them and pushed them out of significant parts of public life. It would have told them they are no longer full participants in our communities.”

Campbell, who represents Phillips, said that his time with the baker reminded him that “such kind, caring people don’t deserve that sort of mistreatment” or to be “bullied by the government or banished from the marketplace.”

“Thankfully, the Supreme Court agreed, making clear that the state was wrong to punish Phillips for living out his faith and that it must respect his religious beliefs about marriage,” Campbell wrote. “So the next time you hear someone badmouth Phillips, remember who he really is—a man unjustly dragged through the mud because he dared to believe that he should be free to live and work consistently with his faith.”