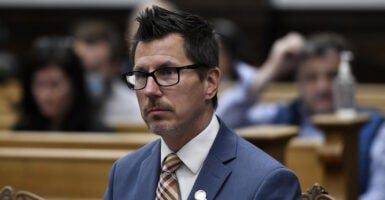 It is clear that the prosecutors who brought charges against Kyle Rittenhouse were determined to bring this case forward no matter what the evidence actually showed. Pictured: Assistant District Attorney Thomas Binger listens as Judge Bruce Schroeder speaks during Rittenhouse's trial at the Kenosha County Courthouse on Nov. 16 in Kenosha, Wisconsin. (Photo: Sean Krajacic-Pool/Getty Images)

Details matter, nowhere more so than in a criminal prosecution.

And prosecutors, who must prove each element of each charge they file beyond a reasonable doubt—the highest burden known in American law—rightfully tend to get hung up on the details of their cases.

A defendant could face decades in prison, or in some cases even death, if convicted.

But apparently the details don’t matter much to Kenosha, Wisconsin, prosecutors who are pursuing charges against Kyle Rittenhouse.

Rittenhouse is facing a slew of charges, most of which are extremely serious—multiple counts of murder and recklessly endangering the safety of others.

But the prosecutors also charged him and forced him to endure a trial on several less serious charges, too—a minor in possession of a firearm and a curfew violation.

So, what happened with these less serious charges?

The judge dismissed both before he submitted the case to the jury for deliberation.

Why? It’s simple. The prosecutors hadn’t proved their case.

A closer look shows that they failed to do the basic blocking and tackling required of their jobs.

On the curfew violation charge, they didn’t submit sufficient factual evidence to show that a curfew was in effect during the time that Rittenhouse roamed the streets of Kenosha.

That may sound silly. But it’s not. While we as the public may “know” a fact, a prosecutor has to put on competent evidence to prove it in court. After all, we have an adversarial system of justice where a defendant’s attorneys are entitled to challenge even seemingly clear evidence and probe it for any weaknesses.

The existence of a curfew is an easy fact to prove. It was an essential element for the prosecutors’ curfew violation charge, but they didn’t bother to support it with sufficient evidence.

Then there’s the minor in possession of a dangerous weapon charge.

To be fair, legal experts widely agree that the statute under which this charge was brought is an example of what not to do when drafting a criminal law. It’s vague, ambiguous, and riddled with confusing and seemingly inconsistent exceptions.

The prosecutors should not have brought this charge unless they were confident that they could prove it.

Then there’s the issues about whether the prosecutors failed to disclose key evidence to the defense within the proper time frame, whether one of the prosecutors inappropriately commented on Rittenhouse’s decision to remain silent before testifying at trial (a big no-no, which drew the ire of the judge), and whether that same prosecutor had waded into issues the judge had already said were off-limits (which, again, rightfully drew the ire of the judge).

So, what to make of all this?

In other words, it appears they brought it for political purposes. Maybe to appease the mob.  Maybe to further their own careers (that backfired). Maybe to make a statement about the scope of citizens’ Second Amendment rights.

We may never know the precise reason.

But what we do know is that a prosecutor’s job is to seek justice in each case he touches. Based on the evidence the prosecutors presented at Rittenhouse’s trial, it seems hard to square that requirement with this case.

The prosecutors may well get a conviction—though based on what I’ve seen presented at trial—they shouldn’t. It’s hard to predict what a jury will do.

This case doesn’t require us to fundamentally alter the role of the prosecutor in our criminal justice system as some have advocated.

But it does highlight the important role that prosecutors play in our criminal justice system. And it highlights that when individual prosecutors do their jobs poorly, those prosecutors, not the system as a whole, should be held to account.