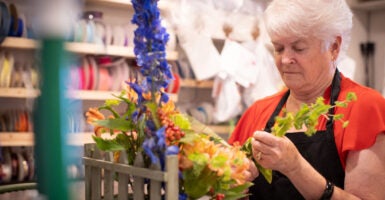 "Most of all, I’m thankful that God’s love has sustained me through all of the trials and challenges of these last few years," florist Barronelle Stutzman says of the end of her court battle to defend her religious freedom. (Photo: Alliance Defending Freedom)

A great-grandmother’s eight-year court battle for her religious freedom finally has come to an end.

“This week, I have put to rest the last legal considerations for a decision my husband, Darold, and I made nearly a decade ago,” Washington state florist Barronelle Stutzman said in a written statement Thursday.

Stutzman, who describes herself as a floral artist, has been in and out of courtrooms since 2013, fighting for her right to decline to provide services for same-sex weddings because of her Christian views on marriage.

The case came to a formal end with an agreement between Stutzman, represented by attorneys at Alliance Defending Freedom, a Christian legal aid group, and the American Civil Liberties Union.

Although Stutzman lost the case, she will not be required to pay legal fees. Instead, she has paid $5,000 to long-time customer Rob Ingersoll, who instigated the case and is represented by the ACLU.

In exchange, Alliance Defending Freedom agreed to withdraw its petition to the Supreme Court asking for reconsideration of Stutzman’s case.

“This settlement is an end to a lengthy court case, not a change in or surrender of Barronelle’s beliefs,” Kristen Waggoner, general counsel for Alliance Defending Freedom, announced in a public statement Thursday, adding:

Over the last eight years, Barronelle stood for the First Amendment freedoms of all Americans, even those who disagree with her about a deeply personal and important issue like marriage. And in so doing, she’s inspired millions of others in their own public and personal battles to live their faith without government interference.

In 2013, Ingersoll asked Stutzman to design flowers for his same-sex wedding. Stutzman explained that her Christian faith prevented her from creating special arrangements for such a wedding, but gave Ingersoll recommendations for three other florists. The two friends hugged and concluded the conversation on friendly terms.

Washington Attorney General Bob Ferguson, a Democrat, learned about the situation during his first year in office and decided to file a lawsuit against Stutzman, whose shop is in Richland, Washington. Shortly thereafter, the American Civil Liberties Union also filed suit against the florist on behalf of Ingersoll and Freed.

Ferguson has been reelected twice since the initial filing.

The Washington Supreme Court ruled against Stutzman in 2017 and again in 2019 after the U.S. Supreme Court sent the case back to the lower court following the victory of self-described cake artist Jack Phillips in the highly publicized, similar case of Masterpiece Cakeshop v. Colorado Civil Rights Commission.

Phillips, also represented by Alliance Defending Freedom, is still in litigation for declining to design and make custom cakes for same-sex weddings or for other purposes that he says violate his Christian beliefs.

The Washington Supreme Court’s ruling against Stutzman ultimately stood after the U.S. Supreme Court declined to review the case in July. The florist faced the possibility of losing her business, home, retirement fund, and life savings to cover the cost of legal fees.

But thanks to the agreement announced Thursday, the great-grandmother no longer is at risk of losing everything.

“I’ve paid $5,000 to Rob and am passing my legal torch on to other artists—like Lorie Smith of 303 Creative in Colorado, whose case may well be heard by the U.S. Supreme Court this term … ,” Stutzman said in the statement.

Smith, a web designer, has challenged parts of Colorado’s Anti-Discrimination Act, which she argues require her to design websites that violate her religious beliefs.

“The Supreme Court needs to affirm the right of all Americans to speak and live consistent with their conscience,” Waggoner said.

With the payment to Ingersoll, whom Stutzman still describes as her “dear friend,” the case of Arlene’s Flowers v. State of Washington draws to a close.

“The settlement leaves in place the two unanimous decisions from the Washington Supreme Court that the Constitution does not grant a license to discriminate against LGBTQ people,” the American Civil Liberties Union said Thursday in a press release.

The ACLU said that Ingersoll and Freed would donate the $5,000 settlement payment to a local chapter of the group PFLAG, and that the gay couple personally would match that amount. PFLAG is “the first and largest organization for lesbian, gay, bisexual, transgender, and queer (LGBTQ+) people, their parents and families, and allies,” the national group says on its website.

“We took on this case because we were worried about the harm being turned away would cause LGBTQ people,” Ingersoll and Freed said in a statement released by the ACLU, adding:

We are glad the Washington Supreme Court rulings will stay in place to ensure that same-sex couples are protected from discrimination and should be served by businesses like anyone else. We are also pleased to support our local PFLAG’s work to support LGBTQ people in the Tri-Cities area. It was painful to be turned away and we are thankful that this long journey for us is finally over.

Stutzman said she is entering a new season of her life and is selling her shop to her employees.

“At age 77, it’s time to retire and give my business to someone else,” Stutzman said.

Noticeably wearied from the legal fight, but still smiling, she said she is grateful for all who supported her over the past eight years:

I’ve met so many, many kind and wonderful people, who’ve generously offered me their prayers and encouragement and support. And I’ve been blessed with outstanding attorneys through Alliance Defending Freedom who’ve given me not only their legal skills, but their thoughtful friendship.

Most of all, I’m thankful that God’s love has sustained me through all of the trials and challenges of these last few years. There is a great deal of division at work in our country today, but God has shown me again and again that His love is stronger than the anger and the pain so many are feeling. And He’s given me countless opportunities to share His love with others along the way.

If you’ve prayed for me, thank you. If you’ve hated me, well … I’ve prayed for you. And as my case closes, I pray that God will give you the freedom of your conscience, protect your right to make your own choices, whatever they may be, and give us all grace to be patient, forgiving, and respectful of each other.

And with six more words, “I wish Rob the very best,” Stutzman closed the book on her court battle to defend her faith.

Ken McIntyre contributed to this report, which has been updated to include the ACLU’s announcement.