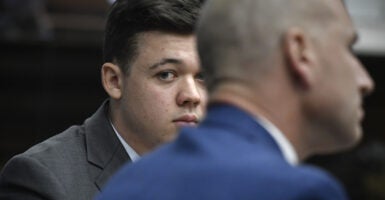 Kyle Rittenhouse listens as Judge Bruce Schroeder talks about how the jury will view video during deliberations in Rittenhouse's trial at the Kenosha County Courthouse on Nov. 17 in Kenosha, Wisconsin. (Photo: Sean Krajacic - Pool/Getty Images)

America continues to be threatened by mob “justice.”

The media coverage of the Kyle Rittenhouse murder trial in Wisconsin has been shameful, and only goes to highlight how much the presumption of innocence until proven guilty and the principle of blind justice are disintegrating.

It should be no surprise, really. The left continues to lean further into racialized ideologies where “colorblindness” is racist and Americans are categorized into categories of the “guilty” versus “oppressed” based on their skin color.

This is among the many reasons why so many Americans are worried about critical race theory and its ideas being taught to children. The result will be an endless cycle of grievance and retribution. Truth and justice will be smothered by the mob.

Chauvin was found guilty of second- and third-degree murder, but before the trial had run its course, Rep. Maxine Waters, D-Calif., had called on protesters to get “more confrontational” if a not guilty verdict was reached.

“We’re looking for a guilty verdict and we’re looking to see if all of the talk that took place and has been taking place after they saw what happened to George Floyd. If nothing does not happen, then we know that we got to not only stay in the street, but we have got to fight for justice,” she said at a rally in Minnesota before the trial was over.

Waters and her allies denied that this was an appeal to violence, but this isn’t the first time she has encouraged the mob to go after people. In 2018, she called on her supporters to harass Trump administration officials in restaurants and gas stations.

Somehow, it seems the Rittenhouse trial is getting even worse. Left-wing and corporate media outlets have done their best to distort the case and demonize Rittenhouse. The characterizations of Rittenhouse and the case in general by the media and some elected officials have been incorrect, appalling, and often entirely disingenuous.

Spencer Klavan at The American Mind highlighted how The Associated Press and countless other media outlets framed the method by which Rittenhouse’s jurors were selected to imply that it was done improperly or in an unfair way.

This wasn’t a one-off incident with The Associated Press. It also ran a piece calling into question the whole innocent-until-proven-guilty thing and whether this trial was “fair.”

The Associated Press is just asking questions, right? It would elicit an eye roll if what it was doing wasn’t so destructive.

Of course, the politicians managed to be as bad as the media.

Rittenhouse’s mother said that even President Joe Biden “defamed” her son by posting a campaign video on Twitter lumping her son in with white supremacists.

“When I saw that I was shocked, I was angry. President Biden don’t know my son whatsoever, and he’s not a white supremacist,” Wendy Rittenhouse said in an interview with Fox News host Sean Hannity. “He’s not a racist.”

Leave it to Chesa Boudin, the recklessly anti-law enforcement district attorney in San Francisco, to say on Twitter of the Rittenhouse case last year that there is “strong evidence of a white shooter motivated by racial bias committing a double murder with an assault rifle.”

The two men that Rittenhouse shot were white, which again, one might not know, given the media reporting on this case.

“If Kyle Rittenhouse gets acquitted, it tells them that even 7 years later they still can get away with it,” she said.

This effort to gin up animosity and racial unrest seems to have paid off.

The police and National Guard were placed on standby in case there are riots following the verdict. Businesses in Kenosha, Wisconsin—which were hit by riots in 2020—are gearing up for a new round of violence. And the trial itself may have been affected.

Judge Bruce Schroeder, who has been presiding over the Rittenhouse trial, has been receiving threats, according to Fox News. Not only that, but people have been caught filming the jurors in the case, who are supposed to remain anonymous until the trial is over.

The message we are getting from what the left thinks justice should be is clear.

The implication is that if left-wingers don’t get the guilty verdict they want, it means that justice wasn’t done and the trial is illegitimate. Trials, you see, should simply be a foregone conclusion for what the regime wants.

In that sense, the Soviet courts were very “fair.” It was justice without a blindfold. Truth, justice, and procedure must bow to the feelings and ideology of the crown and the crowd.

Ironically, it’s this kind of subversion of the rule of law that makes more people consider taking the law into their own hands or doing nothing when called upon to protect and defund fellow citizens.

The American legal system, whatever its flaws, is perhaps one of the most consequential elements in our success as a people. Its destruction to serve the ends of ideology will do no less than hasten the destruction of the United States as a free society.

For some, maybe that’s the point.