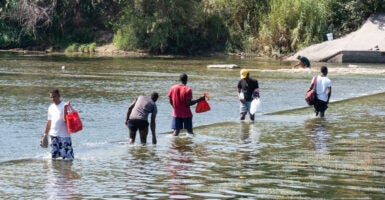 The Biden administration plans to pay illegal immigrants who were separated from their families up to $450,000 per person. Pictured: Illegal immigrants cross the Rio Grande near the Del Rio-Acuna Port of Entry in Del Rio, Texas, on Sept. 18. (Photo: Charlie C. Peebles/Anadolu Agency/Getty Images)

It is not often that I read news that leaves even me so dumbfounded that I need to fact check it.

Even after my thorough fact check, I had to send the article to my production team to make sure I was not going crazy. Yes, the story in question was, in fact, true.

What was the story? A Wall Street Journal report titled, “U.S. in Talks to Pay Hundreds of Millions to Families Separated at Border.”

The article details a plan put forth by the Biden administration to pay immigrants who were separated from their families up to $450,000 per person. Yes, you are reading this correctly: per person, not per family.

As I dug further, this story became even more troubling, especially when compared to other forms of government compensation. How much does the family of a fallen soldier get paid? $100,000.

To put this in perspective, if you die serving our country, arguably the highest honor an individual can do for their country, your family will be paid $100,000. In general, that seems reasonable.

However, if you openly defy our country’s laws and cross the border illegally and are, as a result of breaking the law, separated from your family, you will be paid $450,000. To reiterate, the Biden administration is contemplating a payout of $450,000 per person. That means a family of five will be paid $2,250,000 for breaking the law.

A fallen soldier’s entire family does not even make one-tenth of that. So much for giving your life for your country.

How about the average salary of an American worker, which is approximately $52,000? The median salary is far less, at under $35,000. American workers work every day, tooth and nail, often 10 or more hours a day, seven days a week, to earn that money.

Cross the border illegally, though? You can earn more than eight times more. Where is the disconnect here? Am I missing something?

It is no question that President Joe Biden has been openly endorsing illegal immigration with both his words and actions. Just ask those crossing the border illegally. They will tell you that Biden told them to come. What exactly is the plan here?

Biden took an oath to “defend America from threats foreign and domestic,” yet as we are faced with a threat never faced before, he is taking a back seat and eating ice cream on his weekend trips to Delaware.

In July of this year, nearly 200,000 people were reported by the Customs and Border Protection agency as crossing into the country illegally. Keep in mind, this is only people who they “encountered” and does not include those who crossed undetected.

In short, more than 1,200,000 people have entered our country illegally since Biden took office. Despite this, has Biden even visited the border? Of course he hasn’t!

As a student of history, I recognize the fact that “history repeats itself.” There are countless examples of how lack of awareness of history led to grave consequences for nations before ours. If we do not study history and learn from it, we are bound to fall victim to the mistakes of the past. That is why the crisis at the border is so troubling to me.

Reading the history of the ancient Roman Empire, we see clear parallels to the state of our country today. Famously, Germanic tribes and people from neighboring states entered Rome illegally, seeking refuge in what was, at the time, the greatest empire in the world.

The result was that the Roman government began to prioritize the needs of the vast amounts of new noncitizens at the expense of the Roman citizens. What happened next? Inner turmoil, despair and, finally, civil war. The final outcome was that Rome fell. Are we heading down the same path?

I pray for this country, dearly, and I pray for our president, sincerely. It pains me to watch my beloved America fall victim to a tragic past, especially given the fact that it is entirely avoidable.

Why is this happening? The truth is we have disillusioned and incompetent leadership across the board. Our leaders consistently fail to recognize the true wants and desires of the citizens of this country, all the while prioritizing those entering illegally or those overseas.

I am not suggesting that we be cruel to foreigners or those who immigrate to this country. All I am saying is that one should not be at the entire expense of the other. Our government—and any government—has one simple task: to look after the safety and security of its citizens, always with an eye toward the future. If we continue to fail at that simple task, our government has betrayed its people, and we are doomed as a nation.