Only the Rich and Powerful Can Thrive in Lawless San Francisco 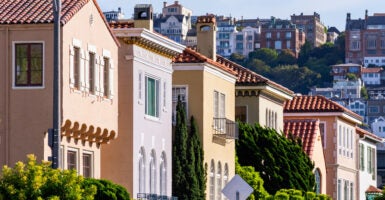 Row of houses in the Marina District of San Francisco, California. Residents in one Marina District neighborhood have banded together to hire security due to the rise in crime. (Photo: Sundry Photography/Getty Images)

In “progressive” San Francisco, safety is for the rich.

That’s the reality of what’s happening in the San Francisco Bay Area as bad policy and anti-police attitudes have created a haven for criminality. Like many other urban parts of America, the Bay Area has been hit with a historic surge in violent crime in the last few years.

However, unlike many other parts of the country, the Bay Area has also been hit by a huge uptick in car theft, property crimes, and shoplifting.

One would think that this would necessitate a massive response by city leaders and the police department to counter the crime surge.

Instead, San Francisco attempted to defund the police following the death of George Floyd in May of last year. Unsurprisingly, it now has a major deficit of police personnel and can’t find replacements for a department where over a third of its officers have retired.

I wonder why? Truly, a mystery.

On top of that, San Francisco has a district attorney, Chesa Boudin, whose plan for “radical change” and equality has been mostly to release criminals and not prosecute repeat offenders of serious crimes.

Boudin has been so extreme that dozens of his mostly left-wing prosecutors have quit.

“Chesa has a radical approach that involves not charging crime in the first place and simply releasing individuals with no rehabilitation and putting them in positions where they are simply more likely to re-offend,” prosecutor Brooke Jenkins said to Bay Area NBC affiliate. “Being an African American and Latino woman, I would wholeheartedly agree that the criminal justice system needs a lot of work, but when you are a district attorney, your job is to have balance.”

The result of this slew of policies has been rampant criminality and lawlessness.

“We don’t feel safe in our neighborhood,” said resident Katie Lyons, according to CBS San Francisco. “And we have an alarm, we have cameras on our property, but we want the extra security of having someone have eyes on our place.”

People are understandably trying to protect themselves. Given the level of crime, private security seems like a good investment.

“It’s a nice area down here, people are afraid of what’s been going on,” said special patrol officer Alan Byard. “They want a safe place to raise their kids. In the last year, I’ve had 10 of my clients move out of the city.”

This is not an isolated problem in the Bay Area, which is filled with leaders of the same ideological bent as San Francisco.

My parents, who live in Oakland, have had the same car stolen twice in the last six months, and their neighborhood has been hit with constant burglaries and property crimes. The number of “for sale” signs in front of houses on their street is notable.

It’s not just homeowners, businesses are getting hit hard, too.

Walgreens, a major pharmacy chain, has decided to pull up stakes and will be closing its doors in San Francisco, on account, it says, of rampant unchecked robberies by organized thieves.

The San Francisco Chronicle, which is seemingly eager to tell Bay Area residents that their lying eyes deceive them, ran a “fact check” claiming that “data” doesn’t support the claim that theft is up. The numbers it cited were reported robberies, which at some store locations weren’t elevated compared to previous years. Though at some locations they were, according to the Chronicle’s numbers.

Of course, the Chronicle’s graphs don’t show the unreported robberies. What incentive do stores have to report crimes if nothing gets done to stop them?

According to The New York Times, Walgreens said that in San Francisco, the company spends on security “46 times our chain average in an effort to provide a safe environment.”

There could certainly be other factors in Walgreens leaving San Francisco—hardly a business-friendly environment—but typically businesses don’t just waste money on security or close stores en masse for no good reason.

Also, Walgreens has hardly been alone. Other retail stores have been ravaged and are also closing stores in the area.

Despite these attempts to make all seem well, the Chronicle tipped its hand about Bay Area crime when it asked readers if they should just accept high crime as a part of criminal justice reform and focus on barricading their homes.

San Francisco’s mess highlights one of the biggest issues with the anti-police movement. Truly, the middle class, poor, and minorities suffer most. Wealthy people and neighborhoods will find a way to buy their own private security, but everyone else will be left to fend for themselves in a state of fear.

In an article for The Wall Street Journal, columnist Jason Riley perfectly laid out why this catastrophe strikes at the heart of left-wing policies, which are sold as countermeasures to “inequality”:

Tempting though it may be to blame the social dysfunction in poorer communities on heartless business owners or racist cops, the bigger blame surely lies with public policies that condone counterproductive behavior and make successful businesses much more difficult to operate. The fallout from antipolice protests in recent years has been all too predictable, as has the left’s response to it. Large employers quit urban areas after the riots of the 1960s as well, and some of those communities still haven’t fully recovered. Until the rule of law is restored and enforced, they probably never will.

Well said. It appears history is repeating itself.

As I’ve written before, when law and order breaks down—as it has in the San Francisco Bay Area—apart from criminals, only the wealthy and powerful can thrive.

A landscape dotted by wealthy, gated communities surrounded by lawlessness, poverty, and crime is typical in plenty of banana republics. Sadly, we will increasingly have it in the United States if this continues.

What’s happening in San Francisco is a prime example of how to turn something that is very good—a beautiful city in a picture perfect and economically prosperous location—into an undesirable, dangerous environment where residents dream to escape to pretty much anywhere else.

Alas, amid this catastrophe, San Francisco leaders have bigger priorities than making the city a livable place for all residents.

They are too busy looking for people to blame, statues to tear down, and school names to change.

Don’t worry, all will be well. It’s for equality, or something.