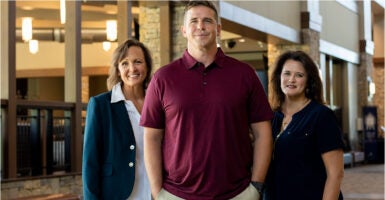 Is it constitutional to require teachers to use a student’s preferred pronouns? That was the central question during a court hearing Monday on a public school policy in Loudoun County, Virginia. Pictured from left: teachers Kim Wright, Tanner Cross, and Monica Gill. (Photo: Alliance Defending Freedom)

A Virginia courtroom was the scene of a debate over teachers’ religious and free speech rights Monday as three Loudoun County teachers challenged a school district policy requiring them to call students by their preferred pronouns regardless of biological sex.

“Policy 8040 gives the Loudoun County superintendent the power to silence and punish teachers because of their views about sex and gender,” Tyson Langhofer, a senior attorney at Alliance Defending Freedom, said during a press conference following the hearing in Loudoun County Circuit Court.

Loudoun County, one of the wealthiest counties in America, is located about 45 miles west of Washington. The county has been a hotbed of debate for months as parents voiced concerns over the district’s teaching of critical race theory and endorsement of controversial transgender policies.

The Loudoun County School Board adopted the transgender policy, formally known as Policy 8040, with a 7-2 vote in August. Alliance Defending Freedom asked the court to issue a preliminary injunction to protect the three teachers’ rights while their case moves forward.

“I cannot lie to a child,” Cross said after the hearing. “But that’s exactly what [the transgender] policy requires me to do. So today we asked the court to halt this policy because it forces me to say things that are both untrue and harmful to my students.”

Under the policy, all employees of Loudoun County Public Schools must “allow gender-expansive or transgender students to use their chosen name and gender pronouns that reflect their consistently asserted gender identity without any substantiating evidence.”

What does “consistently asserted” mean, Bangert asked during the hearing.

The transgender policy allows students to decide upon their preferred personal pronouns, which, in theory, could be any words that a student asks a teacher to use, Bangert argued. The policy runs afoul of the First Amendment rights of teachers by compelling them to use speech that violates their personal convictions, he said.

Stacy Haney, an attorney representing the Loudoun County school system, asserted that the policy falls within curricular speech, meaning that teachers do not have a right to abstain from the policy. She also argued that the policy requires teachers to use students’ preferred pronouns, but does not require a teacher to say he believes a specific child is a boy or a girl.

The transgender policy first gained national attention in May after Cross, the gym teacher, spoke against it during the “public comment” segment of a school board meeting.

“I’m a teacher, but I serve God first,” Cross said at the May 25 meeting, adding: “I will not affirm that a biological boy can be a girl, and vice versa, because it is against my religion, it’s lying to a child, it’s abuse to a child, and it is sinning against our God.”

The school district suspended Cross following his remarks, but was forced to reinstate him in June after Plowman ruled in Cross’ favor.

In another victory for Cross, Alliance Defending Freedom announced Monday that it has reached a settlement with the Loudoun County School Board that allows Cross to express his “constitutionally protected views” without fear of being suspended again.

In the previous ruling, Plowman granted Cross preliminary relief protecting him against retaliation. Now the promise of protection is permanent.

In addition to Cross’ being free to express his views publicly without fear of retaliation, the Loudoun County School Board “also agreed to remove any reference to Cross’ suspension from his personnel file and to pay $20,000 toward Cross’ attorneys’ fees,” Alliance Defending Freedom said in a public statement.

“Teachers shouldn’t be forced to promote ideologies that are harmful to their students and that they believe are false, and they certainly shouldn’t be silenced from commenting at public meetings,” Langhofer said in the announcement.

In addition to requiring teachers to use students’ preferred pronouns and names, Policy 8040 permits students to use bathrooms and locker rooms that correspond “to their consistently asserted gender identity.”

Wright, a middle school English teacher who has taught in Loudoun County for over 20 years, said she joined the lawsuit “not just to stand up for my rights as a citizen and a teacher, but to stand up for the children that I’ve been serving for so long.”

Policies designed to help students struggling with gender dysphoria should put the needs of the student first, Wright said, but the policy in question promotes a “political agenda” before the interests of young people.

Plowman did not issue a ruling Monday, explaining that he needed time to “chew through” all the information presented in the case. The judge said he hoped to issue a ruling sometime after the Thanksgiving holiday.

Because “words carry meaning,” Gill said, teachers should not be forced to “use a pronoun for a student that is not in alignment with their biological sex.”

“Teachers should be free to advocate for the good of their students,” the history and government teacher said. “And today, we asked the court to restore that.”