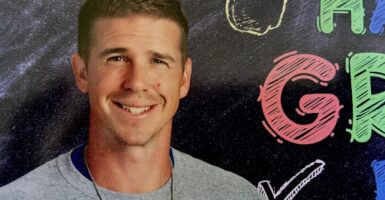 “Public schools should not punish teachers like me for sharing our beliefs," says physical education teacher Byron “Tanner” Cross, whose legal motion to be reinstated and allowed back on school property was granted Tuesday by a judge in Loudoun County, Virginia. Cross, who spoke out against the school system’s proposed transgender policies, may return to Leesburg Elementary School while his case against the county’s school board continues. (Photo: Alliance Defending Freedom)

A Virginia court ruled Tuesday that a county school system must reinstate a gym teacher it suspended for opposing proposed policies that would require all teachers to refer to students by their preferred pronouns regardless of the students’ biological sex.

The judge’s granting of the injunction sought by teacher Byron “Tanner” Cross to halt the Loudoun County School Board’s punishment is a welcome victory as the teacher’s case moves forward.

Circuit Court Judge James E. Plowman Jr. ordered the Loudoun County school system to reinstate Cross, 38, and to lift its ban on his entering any county school building or grounds.

“Educators are just like everybody else—they have ideas and opinions that they should be free to express,” Tyson Langhofer, one of Cross’ lawyers, said in a written statement hailing the judge’s decision, adding:

Advocating for solutions they believe in should not cost [teachers] their jobs. School officials singled out his speech, offered in his private capacity at a public meeting, as ‘disruptive’ and then suspended him for speaking his mind. That’s neither legal nor constitutional. Dozens of other teachers have shared their beliefs on various policies without retaliation; Tanner deserves to be treated with the same respect.

Langhofer is a senior counsel with Alliance Defending Freedom, a prominent Christian legal aid group that represents Cross in the lawsuit challenging his suspension with pay. The teacher’s lawyer also is a resident of Loudoun County.

The Loudoun County school system told The Daily Signal that it would have no immediate comment on the judge’s ruling.

Plowman said he will need to know by June 16 whether either the school board or Cross seeks a trial. His order will remain in place until Dec. 31, unless a trial occurs.

The school system suspended Cross, a Christian and physical education teacher at Leesburg Elementary School, after he told the school board during a May 25 public meeting that he could not comply with two proposed transgender policies.

The support of local parents was evident Friday evening in Leesburg, Virginia, when a rally organized by his legal team drew a crowd of about 100 to back Cross.

“So what was the end goal or even the result [of the suspension]? Fear and intimidation,” Beverly McCauley, a mother of 11, told the crowd at Cornerstone Chapel. “They know they proposed polarizing policies, so if you don’t agree, too bad.”

“‘It’s our way or the highway,’” McCauley, 53, said, characterizing the school board’s perspective. “‘You agree or we suspend you for exercising your First Amendment rights.’”

McCauley was one of several attendees who stood up to speak in solidarity with the beleaguered gym teacher and to voice discontent with the Loudoun County School Board.

Cross, who says that he testified against the transgender policies out of his Christian faith, also spoke at the rally.

“Many of us are concerned that proposed policies would harm students and require us to violate our beliefs by saying things that are not true,” Cross told the crowd, adding: “Public schools should not punish teachers like me for sharing our beliefs.”

Loudoun County, one of the most affluent jurisdictions in the nation, is no stranger to political brawls in its school system.

The school district came under fire in 2019 for introducing sexually explicit and pro-transgender literature into the curriculum, and again in 2020 for attempting to force teachers to comply with cultish “anti-racist” messaging.

Things really boiled over when Cross spoke out at the May 25 school board meeting in opposition to policy changes that would require him and other teachers to refer to elementary school students by their preferred personal pronouns, regardless of their biological sex.

“I love all of my students, but I will never lie to them, regardless of the consequences,” Cross said at that public forum. “I’m a teacher, but I serve God first, and I will not affirm that a biological boy can be a girl and vice versa, because it’s against my religion.”

Two days later, the Loudoun school district put Cross on administrative leave with pay and barred him from school grounds.

The story could have ended there. Cross could have faded away, another victim of a woke school board hellbent on pushing its brand of divisive politics on innocent children.

But the teacher sued the school board, and the local community so far has refused to let his case disappear.

Cross and his lawyers are right, of course. Teachers should not be penalized for expressing their sincerely held convictions, let alone in a public forum.

“It can hardly be argued that either students or teachers shed their constitutional rights to freedom of speech or expression at the schoolhouse gate,” Fortas wrote.

And worse, as McCauley so succinctly expressed it, there seems to be a political motive behind the Loudoun County school district’s suspension of Cross.

Jacolyn Bastasch noted in a Daily Signal commentary that the Loudoun County School Board apparently has no issues with indoctrinating children with leftist ideology and will lash out against those who threaten the propaganda machine.

Cross’ dissent made him a target for retaliation and set off a court case with massive ramifications for free speech.

“The implications are really huge because what Loudoun County is saying is if you’re a public school teacher and you speak in a public forum and several people email the school and say they disagree with you, they have the right to terminate you,” Langhofer, the lawyer with Alliance Defending Freedom who represents Cross, said at the rally.

Emilie Kao, director of the Richard and Helen DeVos Center for Religion & Civil Society at The Heritage Foundation, the parent organization of The Daily Signal, welcomed the judge’s ruling, saying in an email:

The court did the right thing by halting the Loudon County school district from further punishing Tanner Cross for speaking according to the truth that we are born male or female. Taxpayer-funded public schools should provide an environment for learning that is open to different viewpoints. Compelling a teacher to use preferred pronouns in violation of his beliefs sends a chilling message to the entire school, including students.

Parents and policymakers around the country are joining the Promise to America’s Children movement to protect the freedom of students, to either speak or not speak and to affirm or not affirm messages or ideas that violate their beliefs or consciences.

More locally, Cross’ case represents yet another blemish on the reputation of Loudoun County’s public schools.

For the sake of free speech, let’s hope he prevails.