Can Americans Exercise Religion in an Execution Chamber? 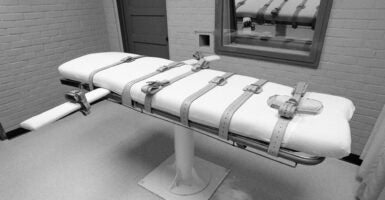 In Ramirez v. Collier, the Supreme Court will decide whether Texas has the authority to limit religious expression in the execution chamber. (Photo: Bernd Obermann/Getty Images)

Dustin Honken was convicted of murdering five people, including two children, and was sentenced to death in a federal court in 2004.

Sixteen years later, he was executed.

He also received the last rites of the Catholic Church—in the execution chamber—from Rev. Mark O’Keefe, a Catholic priest who accompanied him there.

“On the day of the execution, Father O’Keefe was screened thoroughly by security and accompanied by an agent escort at all times—except for the brief period during which he accepted Mr. Honken’s final confession,” said a brief filed by the American Civil Liberties Union in Ramirez v. Collier, which the Supreme Court heard this week.

“When it was time for the execution to begin, Father O’Keefe was led to the execution chamber,” said the brief. “Mr. Honken was already strapped to a gurney with an IV inserted into his body, wires attached to him that appeared [to] be for a heart monitor, and an oxygen gauge placed on his finger.

“In the presence of prison officials and the agent escort, Father O’Keefe went to Mr. Honken to administer his last rites,” said the brief. “Father O’Keefe gave him his final communion, placing a host on Mr. Honken’s tongue, putting holy oil on his head and hands, and delivering several prayers out loud.

“Though he stepped back while the lethal drugs were administered, after Mr. Honken was pronounced dead, Father O’Keefe again went to his body, blessed him, and prayed out loud,” said the brief.

While it may be difficult to muster any empathy at all for a man convicted of multiple murders, did this priest not have a right to minister to this man at the moment of his death?

The First Amendment says: “Congress shall make no law respecting an establishment of religion, or prohibiting the free exercise thereof.” The Texas Department of Criminal Justice now claims it has the right to prohibit a clergyman from touching a prisoner in an execution chamber or saying any words there, including prayers.

Not even a prayer.

In Ramirez v. Collier, the Supreme Court will decide whether Texas has the authority to do this.

“In 2004, Pablo Castro, a father of nine, lived in Corpus Christi,” said their brief. “He worked hard to support his family.

“Lydia Salinas, his long-time manager, testified that they worked the night shift at the Times Market and took turns buying dinner,” the brief said. “On July 19, 2004, Salinas bought dinner because Castro had only about $1.00 in his pocket. Near close, Castro went to empty the garbage; when Salinas next saw him, Castro was dead—beaten, stabbed 29 times, and lying in a pool of his own blood.”

In 2008, Ramirez was brought to trial for this murder.

“At trial,” said the Texas brief, “he admitted to killing Castro but denied the robbery that made it a capital offense. A jury disagreed, and Ramirez was sentenced to death in December 2008.”

The case that Ramirez brought to the Supreme Court this year under the First Amendment and the Religious Land Use and Institutionalized Persons Act did not seek to overturn his conviction or his death sentence. It sought to reverse the policy of the Texas Department of Criminal Justice that prohibits his pastor from touching him or speaking while in the chamber where Ramirez will be executed.

“Petitioner has always believed in God,” his lawyers argued in the brief they submitted asking the Supreme Court to take up his case. “But it was in prison that petitioner ‘came to salvation’ through spiritual guidance and became a devout Christian.”

“For the past four years,” it said, “petitioner has been a member of the same church, the Second Baptist Church in Corpus Christi, Texas.”

“Petitioner’s RLUIPA and section 1983 First Amendment suit does not challenge his conviction, his death sentence, or the State’s chosen method of execution,” said the brief.

“Instead,” it said, “petitioner seeks a narrow, but vitally important, remedy essential to his religious faith: He asks the State to allow his chosen spiritual advisor, Pastor Dana Moore, to perform ministrations in the execution chamber that include laying hands on petitioner and audibly praying over and with petitioner during the final moments of petitioner’s life.”

In a brief to the court, the Texas attorney general and solicitor general argued that Ramirez’s own interests might be harmed by his pastor’s presence.

“An outsider touching the inmate during lethal injection poses an unacceptable risk to the security, integrity, and solemnity of the execution,” they told the court. “Even inadvertent interference with the IV lines could cause pain to Ramirez and emotional distress to his victim’s family. Vocalizing during the lethal injection would interfere with the drug team’s ability to monitor and respond to unexpected occurrences. [The Texas Department of Criminal Justice’s] prohibitions on contact and vocalization further its compelling interests.”

The U.S. Conference of Catholic Bishops sided with Ramirez, citing the Constitution and the Gospel of Luke.

“The key spiritual guidance provided by the church is of particularly grave importance at the moment of death, and the formation and communication of that guidance is constitutionally protected from government interference,” the U.S. Conference of Catholic Bishops said in its brief.

“The pre-eminent example of this,” said the bishops, “is the Bible’s account of the repentant ‘Good Thief’ who asked Christ for forgiveness on the Cross: ‘Jesus, remember me when you come into your kingdom.’ He replied to him, ‘Amen, I say to you, today you will be with me in Paradise.’”

The Supreme Court should recognize that the free exercise of religion extends even into execution chambers.