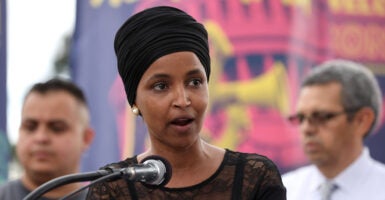 Rep. Ilhan Omar, D-Minn., seen here at a Sept. 21 rally in Washington in support of a pathway to citizenship for illegal immigrants, campaigned for Minneapolis' ballot Question 2, which would have abolished the city's police department. Voters, however, resoundingly rejected it. (Photo: Chip Somodevilla/ Getty Images)

Common sense prevailed in Minneapolis on Tuesday. The city won’t replace police officers with social workers after all.

Minneapolis’ ballot Question 2, which would have eliminated the city’s police department and replaced it with a “Department of Public Safety,” went down in flames. It lost by a wide margin—nearly 17,700 votes—despite the huge amount of money spent on its behalf, including donations from liberal groups such as the ACLU and left-wing billionaire George Soros’ Open Society Foundations.

What’s particularly notable about the Minneapolis vote is that it appears that a majority of voters in predominantly black north Minneapolis voted “no” on abolishing the police.

It seems that many minority voters aren’t aboard the anti-police agenda, as many on the left had presumed.

That’s all the more significant considering that following the death of George Floyd at the hands of a Minneapolis police officer in May 2020, the city became ground zero for the “defund the police” movement.

Last year, a majority of the Minneapolis City Council vowed that it would defund and dismantle the police department. But a lot has happened in the nearly 18 months since.

Police officers have left the Minneapolis Police Department in droves, and violent crime has skyrocketed. The city is seeing a record-breaking pace of homicides after decades of declines in violent crime. That mirrors trends seen around the country.

Many of the cities hardest hit—such as Minneapolis and Portland, Oregon—saw serious efforts undertaken to defund the police.

Now, many of those same cities are quietly trying to re-fund their police departments, but it’s proving difficult to rebuild in light of what’s happened in the past year and a half. Police departments are struggling to replace lost personnel.

Has any policy initiative failed as quickly and decisively as that of defunding the police?

For Americans with common sense, the movement’s failure is obvious. But for left-wing, utopian zealots used to promoting narratives over truth, the answer to failure is to blame wicked unbelievers.

Rep. Ilhan Omar, D-Minn., who was a major backer of the “abolish the police” proposal, absurdly and counterintuitively blamed the Minneapolis Police Department for the huge uptick in violence.

At a town hall event in October, she said that “the police have chosen to not fulfill their oath of office and to provide the public safety they are owed to the citizens they serve.”

Omar then called the Minneapolis police the “most dysfunctional in our state and probably in the country.”

It wasn’t just in Minneapolis where the defund the police movement ran into voters mugged by reality—or perhaps considering what’s happened in the past 18 months, actually physically mugged.

Even the liberal Washington Post noted, “Voters are open to police overhauls and new oversight, but they strongly rejected some of the more drastic ideas—including in some very blue areas. And amid rising crime nationwide, pro-policing messages won the day.”

The reality is that people of all ethnicities tend to react badly to nonsensical policies that end in catastrophe. In the case of defunding the police, it has often been minorities who have paid the highest price from its consequences.

“If the past 18 months have taught anything … it is that crime, not policing, has a disparate impact on minorities,” Manhattan Institute scholar Heather Mac Donald wrote in the New York Post. “And revalorizing the police is essential, not just to saving black lives. Public safety is the prerequisite to saving America’s lockdown-blighted cities.”

A desire for public safety isn’t “white supremacy,” it’s common sense. And common sense appears to be turning the tide against the “defund the police” movement, which has resulted in no less than the largest year-over-year homicide spike in American history, according to FBI statistics.