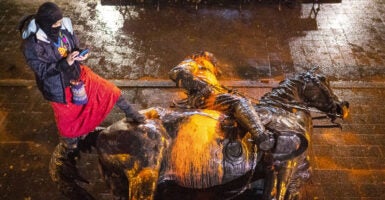 A protester stands over a toppled statue of President Theodore Roosevelt during an Indigenous Peoples Day of Rage protest on Oct. 11, 2020, in Portland, Oregon. (Photo: Nathan Howard/Getty Images)

So, how are things going now?

Anarchy reigns in the City of Roses.

Over the weekend, police were called to 19 shootings. One of which is likely to be ruled a double homicide, bringing the total number of murders in Portland this year to 71, surpassing the 1987 record of 70.

Homicides are only part of a larger problem in Portland.

Earlier in October, a mob of around 100 anarchists tore up the downtown part of the city while police looked on.

They went on a rampage, spraying slogans like “kill cops” on the buildings they vandalized, and did at least $500,000 worth of damage, according to Fox Business.

The Portland Police Bureau said that no arrests were made because of the destruction.

But that wasn’t the fault of the police. Instead, the problem is the politicians who govern the state and local officials, who have intentionally tied the hands of law enforcement. They are the reason why it is impossible to stop criminals and mobs from doing what they wish to the city.

Portland Police Lt. Jake Jensen said in an interview with KOIN, a local Portland CBS affiliate, that the reason his department didn’t intervene was “House Bill 2928 and the restrictions placed on us in a crowd control environment.”

The legislation deeply restricts the use of nonlethal crowd control tools, like pepper spray and rubber bullets. Though there are exceptions to this law in the case of serious threats to public safety, like a riot, local authorities are still wary about using these tools.

“The law clearly allows Portland Police to use effective tools necessary to control violent crowds,” Oregon House Minority Leader Christine Drazan, a Republican, said in an interview with The Associated Press. “However, activist attorneys are deliberately misinterpreting legislation to prevent police from intervening. They have no business putting law enforcement and community safety at risk.”

Portland Mayor Ted Wheeler, a Democrat, said nothing of the issue.

Wheeler marched with protesters in 2020 following the death of George Floyd at the hands of Minneapolis police. He was all aboard the “defund the police” movement, too.

The Portland mayor is a lot quieter these days.

Despite these attempts to placate the activists, the mob eventually turned on Wheeler and accused him of being a “fascist” for not giving in to its every demand.

It turns out, appeasement doesn’t work when dealing with uncompromising radicals. Joining with them to show solidarity isn’t much help either. Alas, even Robespierre went to the guillotine.

Now, Wheeler is besieged, and so is his city.

While plenty of local and national left-wing media have done their best to make it seem like the disintegration of Portland is overblown, it’s hard to ignore its problems.

Portland has quickly become one of the most violent cities in America.

This follows the trend of last year when Portland saw the largest increase in homicides in the country. Impressively terrible given the nationwide homicide spike.

Maybe if Portland and Oregon’s leaders had backed the blue, the city’s streets wouldn’t be running red.

But now that the city is slowly reversing itself by restoring some police funding, and recreating the violence prevention unit that was abolished in the wake of the George Floyd protests, the bleeding is hard to stop.

Ordered liberty once lost is difficult to restore.

It isn’t just the Portland mayor and Oregon politicians that have made a mess of the situation. Portland’s George Soros-backed district attorney consistently drops charges against protesters and people who interfere with police duties. So even if the police are given the green light to act more aggressively in stopping crime, their efforts will often come to nothing if lawbreakers are immediately released.

No wonder the city was besieged with protests and riots for nearly 200 straight days following the death of George Floyd.

Portland is a microcosm of the blue-city model that’s disintegrating so completely. High crime, lawless activists operating with impunity, rampant homelessness, and a depressed business climate are the telltale signs of its failure.

Portland residents may pride themselves in their commitment to “sustainability,” but these trends are far from sustainable or desirable.

The statues came down first, then everything else.

This is the borne fruit of mob rule.