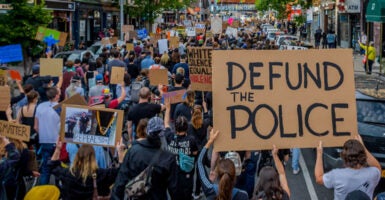 Some cities have begun to reverse “defund the police” policies they adopted after the death of George Floyd in police custody little more than a year ago. Pictured: Thousands of demonstrators fill the streets of Brooklyn on June 2, 2020, in a march protesting Floyd's death and demanding the defunding of New York's police force. (Photo: Erik McGregor/LightRocket via Getty Images)

It looks as if the surge in violent crime of 2020 is holding steady and perhaps escalating in 2021.

Numbers on violent crime from cities around the country have jumped by historic and unprecedented rates in the past year.

This surge is returning many of America’s cities to violent crime rates not seen since the early 1990s.

Some cities have begun quietly reversing the “defund the police” policies they adopted following the May 25 death of George Floyd in police custody in Minneapolis.

And some commentators on the left finally are beginning to recognize that the crime problem in major cities is out of control and can’t be ignored.

No city was hit by a sharper increase in violent crime than Portland, Oregon, which partially defunded its police department in 2020.

Jonathan Chait, a liberal writer for New York magazine, tweeted out a report from The Washington Post highlighting “how depolicing in Portland has harmed minority communities.”

Who could have seen that coming?

Portland recently began “re-funding” its police force and restoring programs to prevent gun violence under new names. It’s a tacit admission that the defund movement was an utter failure.

Given how sustained the violence has been in Portland, and how similar the pattern was in other cities, it’s hard to conclude that the social justice movement—as the Post called it—was really “hijacked.”

It seems much of the violence and destruction was baked in from the beginning. And even if it wasn’t, Portand’s leaders have done a poor job of stopping the mayhem and protecting the lives and property of law-abiding citizens. You know, the most basic function of government.

The Portland pattern repeated itself around the country following Floyd-related protests as other cities that chose to defund police or generally reduce policing saw almost incredible increases in violent crime rates.

Big cities such as New York, Philadelphia, and Los Angeles have suffered greatly, but smaller cities such as Milwaukee, Louisville, and Minneapolis have seen equally dramatic crime spikes. These cities all have chosen to defund police departments in some way or generally are suffering shortages in manpower.

It’s important to consider that most countries actually experienced a decrease in both violent crime and overall crime during the pandemic. So it’s hard to claim that what we are seeing with violent crime is just a result of COVID-19.

White House press secretary Jen Psaki explained the U.S. as outlier on crime by blaming guns. But violent crime has fallen sharply as gun ownership climbed in the past few decades.

The more likely cause for the sudden, explosive surge in violent crime is what researchers call the “Minneapolis Effect.”

As Paul Cassell, a law professor at the University of Utah, said at a Heritage Foundation event in March, the rise in crime likely is connected to the rhetoric and actions of leaders and activists following Floyd’s death and the ensuing protests and riots.

Cassell explained what this entailed:

The change in rhetoric, move away from proactive policing, and outright defunding of police created a perfect storm for a huge crime wave.

Undermanned and undersupported police departments around the country now struggle to contain the violence.

As severe as the problem has become, the countless lives lost or destroyed, the focus of the liberal mea culpas mostly have been focused on how the trend will hurt Democrats politically.

“Republicans can turn rising crime into a culture war wedge issue,” political commentator John Avlon said on CNN. “And as we turn the corner into summer, [with its] usual increase in violence crime, public safety is again front and center in people’s minds after decades of declines.”

Avalon pointed to several explanations for the crime increase—including the release of criminal defendants amid COVID-19 concerns, but also “the overall reallocation of police resources.”

New York Times columnist Ezra Klein said on his podcast that the steep jump in crime could create a political crisis and a backlash for those in power. He wrote on Twitter that “fear of violence undermines liberal politics.”

Whatever left-wing pols and woke activists think about their political fortunes, that’s not really what matters here.

What matters is that many Americans—especially those living in or visiting these crime-ridden cities—are being put at risk because of bad and foolish policies.

Great and beautiful cities, many of which had begun to recover since the 1970s and 1980s, are falling back into decay.

Those who cast doubt and criticized the “defund the police” movement often were lambasted by the media. And undoubtedly, many who knew the move was foolish said nothing for fear of backlash.

But if black lives or any lives matter, this violent crime epidemic should be viewed as nothing less than a crisis that will require a great deal of effort to fix.