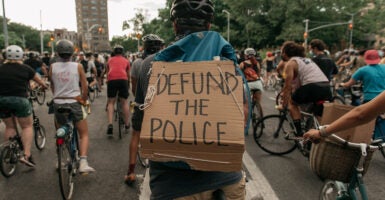 "I think what we see has happened is a reduction in policing, particularly the kinds of policing that might be expected to have the most effect on homicides and shooting crimes,” former Judge Paul Cassell says. Pictured: Cyclists gather June 10 in Brooklyn for a mass ride protesting police brutality. (Photo: Scott Heins/Getty Images)

This past year, “defund the police” has been a frequent call from activists seeking systemic reform of the American criminal justice system.

It became a popular rallying cry after the May 25 death of George Floyd in police custody in Minneapolis. And Minneapolis is among cities that partially defunded police departments and proactive crime prevention programs in response to the incident.

However, the months since brought a massive surge in violent crime, a phenomenon called the “Minneapolis Effect” by two legal experts who spoke at a virtual event held March 16 by The Heritage Foundation.

Cassell, also a former U.S. District Court judge for the Utah district, spoke about his research into the rise in crime.

“I got involved in this particular topic when I read headlines that I think many people read last summer,” Cassell said. “We were seeing an alarming increase in homicides and shootings in many American cities.”

So what is going on?

Cassell said that some explanations for the increase in violent crime aren’t likely. For instance, not many of the homicides actually took place at the protests and riots; they occurred in other areas.

So the crime increases aren’t just a result of the protests themselves. And when the protests and riots subsided, the higher homicide rates continued.

Seasonal differences in the number of homicides also don’t explain the phenomenon, Cassell said. Oftentimes an uptick in crime occurs in the warmer months, but these jumps were “well in excess” of usual seasonal fluctuations, he said.

Although purchases of firearms have jumped since the beginning of the pandemic, Cassell said, these guns represent a “drop in the bucket” of the total number of guns in America. The shooting surge also happened at the end of May, not in March, when people started buying guns, he said.

Economic causes for the increase in violent crime are also unconvincing, Cassell said, because large-scale unemployment and other effects of the pandemic and lockdowns occurred before the surge in violent crime in May.

Finally, Cassell said, the COVID-19 pandemic itself is an unlikely cause of the spike in violent crime. Not only did it begin more than two months before, but other types of crime didn’t increase significantly.

This is, very specifically, a surge in violent crime—and usually involving firearms.

Cassell said that the most likely cause is what he calls the Minneapolis Effect, similar to the so-called Ferguson Effect, referring to the violence that followed the fatal police shooting of a black man in Ferguson, Missouri, in 2014:

Here I think we have anti-police protests surrounding George Floyd’s killing. As a result, police had to be redeployed away from their normal beats and high crime areas to police the protests. And even extending beyond that, I think what we see has happened is a reduction in policing, particularly the kinds of policing that might be expected to have the most effect on homicides and shooting crimes.

Police activities curbed in the wake of the protests over Floyd’s death were what Cassell called “proactive policing,” which includes policies such as stop and frisk as well as vehicle stops.

For instance, according to crime data from the Philadelphia Police Department, the number of total vehicle stops in the city has dropped significantly since the end of May.

New York City saw a steep increase in homicides, but a decrease in arrests. Chicago experienced a similar trend.

Cassell pointed not only to quantitative data but to statements and actions by authorities in various cities since the Floyd protests began:

Following the anti-police protests that occurred in Milwaukee as they did in many other cities around the country, police morale was low, officers began to pull back. We see that police departments in Milwaukee, or police officers in Milwaukee, were distracted or just not doing shooting reviews. They were often deployed to demonstration lines, so there was really a significant redeployment [of] police power in Milwaukee.

The bottom line, Cassell said, is that clear links appear to exist between the Floyd protests, the actions cities took amid following those protests, and the significant increase in homicides and shootings since:

Rosenthal, formerly Chicago’s deputy corporation counsel for counseling, appeals, and legal policy, said a strong connection likely exists between a decline in proactive policing and the spike in homicides.

Rosenthal also touched on why a few alternative theories are unlikely to be the cause of the increase in violent crime.

Cassell’s research, however, showed that although proactive policing went down following the Floyd protests, 911 calls seeking police assistance did not drop. So, given the information available, it’s difficult to link the decline in community cooperation to the surge in homicides.

Rosenthal described another theory attributing the spike in violent crime to the “blue flu.” That’s when police officers call in sick and don’t do their jobs because of anti-police rhetoric, or even for racist reasons, he said.

It’s “possible” this is the case, Rosenthal said, but it’s hard to find any hard evidence. Anonymous interviews would be one way to track it, he said.

“The interviewing data that’s available, though, does not suggest that police response to these kinds of scandals and community criticism is an unwillingness to perform their jobs,” Rosenthal said. “Very little of that [is] reflected in the relevant data.”

The best, and most proven, way to cut down on violent crime is proactive policing, he said, where officers actively patrol hot spots where a high amount of criminality takes place around vulnerable victims.

Oftentimes, this sort of aggressive policing puts officers in situations where a violent confrontation is more likely and an officer’s judgment could be questioned.

An incident such as Floyd’s death in police custody, Rosenthal explained, could lead officers to avoid situations in which a confrontation may take place. He said this effect often fades over time, but the deeper problem is an active “de-policing” movement that demands “systemic reform” and “defunding the police.”

Institutionalizing policies that tend to make police officers internalize the potential risks of proactive policing without the benefits could be a setup for long-term failure in crime-fighting, Rosenthal said.

That suggests policymakers should proceed with caution in how they change police policies, he concluded:

It is a reason to proceed with what I regard as first and foremost not a legal issue but a management issue. We need more effective management in our police departments, but that’s not going to occur if we do nothing more than increase officers’ perception that they are likely to face discipline when they engage in proactive policing.

Paul Larkin, a senior legal fellow at Heritage, was host of the event, titled “‘Minneapolis Effect’: Hostility Toward Law Enforcement, Police Officer Passivity, and the Rise of Violent Crime.”