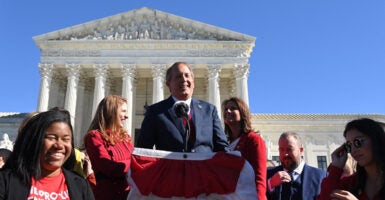 We are only a month into the Supreme Court’s 2021-22 term and abortion already appears to be this season’s defining topic.

The court heard arguments in two cases on Monday related to the Texas Heartbeat Act, which bans most abortions after the fetal heartbeat is detected (which is usually about six weeks after conception). And in just one month, the court will hear arguments in Dobbs v. Jackson Women’s Health Organization, which challenges the constitutionality of Mississippi’s ban on most abortions after 15 weeks.

While Dobbs v. Jackson Women’s Health Organization focuses on the constitutional merits of the Mississippi ban, the Texas cases focus on how the legislature sought to shield the Texas abortion ban from legal challenge in its Heartbeat Act.

Ordinarily, parties that opposed the law would file a lawsuit before it was scheduled to go into effect, asking for an injunction to stop any enforcement while its constitutionality is litigated. That’s what happened in Dobbs v. Jackson Women’s Health Organization. The Texas law, however, says that it can be enforced only by “private civil actions” and removes public officials (those normally tasked with the enforcement of state and federal law) from the enforcement process on the Texas Heartbeat Act altogether. As a result, the law went into effect as scheduled on Sept. 1.

In Whole Woman’s Health v. Jackson, abortion providers sued to prevent state courts from handling any private civil actions to enforce the Texas abortion ban. The U.S. Court of Appeals for the 5th Circuit put the Whole Woman’s Health v. Jackson case on hold, and on emergency appeal, the Supreme Court left the hold in place, but said that the case raised “serious questions” about the law’s constitutionality.

Even though the 5th Circuit scheduled arguments on the issue of whether federal courts could enjoin state courts from handling these lawsuits for early December, the plaintiffs appealed again to the Supreme Court by way of a rarely used procedural move known as “certiorari before judgment.”

In United States v. Texas, the federal government sued Texas, also asking that the abortion ban be put on hold while its constitutionality is litigated. Like the abortion providers did in Whole Woman’s Health v. Jackson, the Biden administration did not wait for the 5th Circuit to rule, but appealed directly to the Supreme Court.

So, on Nov. 1, the Supreme Court heard arguments in two cases—one brought by abortion providers and one by the federal government—involving procedural issues that must be cleared up before the constitutional merits of the Texas abortion ban can even be addressed.

In Whole Woman’s Health v. Jackson, the question is whether Texas can insulate its state law from federal court review by delegating enforcement to the public instead of state officials.

In United States v. Texas, the question is whether the federal government has an interest in the case sufficient enough to sue state courts and officials to prevent them from enforcing the law.

Texas argues that its new law does not prevent the courts from deciding this underlying constitutional issue. The enforcement mechanism simply prevents blocking the law before it is enforced. But abortion providers can still claim the law is unconstitutional should it be enforced against them in a private civil action.

Besides, Texas says, the federal government’s desire to see the law declared unconstitutional is not enough to justify its intrusion into the state’s legislative business.

At the Nov. 1 argument in United States v. Texas, newly appointed Solicitor General Elizabeth Prelogar said that the United States has a vested interest in vindicating constitutional law and warned that if the Supreme Court approved of this method of limiting judicial review, it could be replicated in other contexts.

That may be true as a matter of general principle or policy, but the question for the Supreme Court is whether the United States has the legal standing to sue Texas over it. It would appear not—as the United States cannot demonstrate it has standing to bring a suit against an entire state, because it cannot prove it was somehow harmed by the actions of Texas and all its citizens.

Justice Neil Gorsuch appeared impatient with the United States’ broad request for relief, saying that there had never been such an injunction so expansive “in the history of the United States.” This skepticism about the federal government’s desire to intervene in a state’s legislative and judicial process may mean that United States v. Texas is on shakier ground than Whole Woman’s Health v. Jackson.

The justices were concerned not with the choice of enforcement mechanism in the Texas abortion ban—using private citizens to sue for violation of a state law—but were skeptical of the Texas solicitor general’s argument that the mechanism, by its nature, exempts the law from judicial review at all before it goes into effect.

Because of how it’s written, the Texas Heartbeat Act cannot be challenged until after someone has brought suit on the act itself, and this seemed to be a universal hang-up for nearly the entire bench. Justice Sonia Sotomayor in particular cited a long list of constitutional rights, from the Second Amendment to same-sex marriage, that might also be infringed if the Texas act could be replicated in other states.

This is the crux of the issue in Whole Woman’s Health v. Jackson.

Though that would remedy only one of the issues facing the justices.

Ex Parte Young, a Supreme Court case from 1908, featured prominently in the arguments of the United States. In that decision the Supreme Court allowed suits in federal courts for injunctions against officials acting on behalf of states, despite the state’s sovereign immunity, when the state acted contrary to any federal law or contrary to the Constitution. But at the same time, that decision held that federal courts could not enjoin state courts from hearing cases.

The abortion providers in Whole Woman’s Health v. Jackson argued that they were entitled to an injunction that would prevent state court clerks from accepting complaints (brought by private citizens) that claim the act has been violated. But that seems to run afoul of Ex Parte Young’s prohibition on federal courts enjoining state courts.

Justice Brett Kavanaugh mentioned that the “spirit of Ex Parte Young” ought to apply, and that the underlying holding in that case might be expanded to permit an exception in this case.

Justice Elena Kagan was quick to point out in oral arguments, saying: “Essentially, we would be inviting states, all 50 of them, with respect to their unpreferred constitutional rights, to try to nullify the law [on abortion] of—that this court has laid down as to the content of those rights.”

Texas Solicitor General Judd Stone, arguing for the state of Texas, responded: “The state of Texas has not nullified anything. Abortions have dropped to 50% or 60%. We have not wholly extinguished the right of women to get abortions and Texas judges are [still] bound to follow this court’s precedent fully and faithfully.”

The outcome in the Nov. 1 cases will have little to no effect on the outcome in Dobbs v. Jackson Whole Women’s Health, set for oral argument on Dec. 1. If the Supreme Court decides to ditch 50 years of abortion precedent and overturn Roe v. Wade—and some conservatives have posited there are enough votes from the justices to make it happen—all state abortion lawmaking ability and all related regulations would be sent to the states for determination of what can and cannot be done within their own boundaries on this hot-button issue.

But if the Supreme Court keeps Roe v. Wade alive, Texas may be out of luck, as the Texas Heartbeat Act restricts exercise of a constitutional right. The justices’ line of questioning seemed to betray their desire to let the abortion providers’ case move forward.

In either case, the Texas Heartbeat Act—and not Roe v. Wade—might well be the law sent to history’s dustbin.

Editor’s note: Kagan’s quote has been corrected to reflect the official transcript.