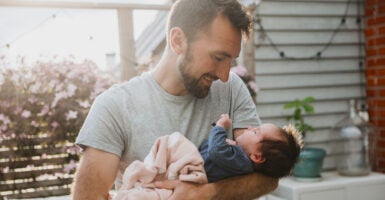 Liberals in Congress propose a paid family leave policy that is unworkable and likely would be inaccessible to the workers who need it most. (Photo: Johner Images/Getty Images)

But just as access to flexible and accommodating policies is rising, Democrats’ big-government socialism bill would halt that trend and impose a one-size-fits-all policy instead.

The problem is that liberal politicians propose a family leave policy that is unworkable and likely would be inaccessible to workers who need it most.

Here are four reasons why this new, unfunded entitlement shouldn’t make the cut in the big-government socialism wish list.

1. Treasury says it can’t implement the program. Even with an extra $80 billion for an army of IRS enforcement agents, Treasury Department officials say they are not equipped to run a paid family leave program.

According to a topline memo from Treasury officials to staff of the House Ways and Means Committee, “Treasury has no responsibility for large, permanent benefit entitlement programs.”

“Treasury does not have the functional expertise” nor “the internal expertise,” officials said, and “is not staffed” to administer large entitlement programs offering permanent benefits.

The memo goes on to detail what would be required of the Treasury Department to manage the proposed program. Treasury would have to “create and staff an entirely new office (or division) to administer the paid leave benefit program, including determining individuals’ eligibility for the leave benefits and awarding grants to eligible States and employers that maintain leave programs.”

Treasury also would be “responsible for taking applications from individuals seeking the paid leave benefit, establishing a call center, and creating an appeals process for individuals to challenge denied benefits, among other administrative functions,” the memo says. “These are not Treasury functions.”

And unlike past proposals, no payroll tax would fund the benefits, so this is a purely regressive program. There’s zero rational for enacting new entitlement programs that disproportionately help high-income earners who already receive these benefits from their employers or their own incomes.

3. The program would use taxpayer dollars to take control of employers’ plans. Paid family leave policies that are flexible and accommodating were already on the rise prior to the COVID-19 pandemic, and they’ve only increased further because of the need for such leave policies as well as the need for employers to respond to workers’ desires amid the record labor shortage.

But if you like your paid family leave program, you’re unlikely to be able to keep it. Instead of just letting those policies be, the proposed paid family leave program would use taxpayer dollars to buy control over private employers’ plans. The federal government would cut large checks to corporations to cover up to 90% of their workers’ paid leave costs, but only if employers follow the program’s rules and regulations.

That means putting the Treasury Department in ultimate control over why, when, and for whom workers may take leave—including Treasury’s determining what constitutes an “affinity” relationship or “the equivalent of a family relationship.”

If employers denied requests for paid family leave—including instances when workers took leave without notifying employers and then applied for paid leave benefits a week later—their employees could appeal those decisions to the Treasury Department. The employer could be liable for the cost of the appeal.

No wonder Treasury doesn’t want to touch this program with a 10-foot pole. This is a whole lot of unnecessary costs and bureaucracy just for the federal government to gain control over paid family leave policies that already exist.

4. Low-income workers aren’t likely to benefit. Although in theory the program would expand access to paid family leave to almost all working Americans (and in some cases, even to those who aren’t working), the reality is that it would be largely inaccessible to many low-income workers.

Across the globe, government paid leave programs consistently fail to provide meaningful benefits to low-income workers. Among women who took leave in California in 2016, for example, only 36% of those making less than $32,000 a year received paid leave benefits from the government, compared to 79% of those with annual earnings over $97,000.

And the proposal provides no job protection for the 45% of disproportionately low-income workers who don’t qualify for job-protected family and medical leave.

As different factions of liberal lawmakers battle over what socialist policies to keep and which to abandon, spending $500 billion for a paid family leave program that barely would move the needle on low-income workers’ access to leave should be among the first to go.

Policymakers instead could expand access to paid family leave without spending a single dime more.

Congress could pass the Working Families Flexibility Act so that lower-wage workers may choose to accumulate paid leave. Lawmakers also could enact Universal Savings Accounts and make it easier for companies to provide private disability insurance benefits that cover most situations during which workers need to take leave.