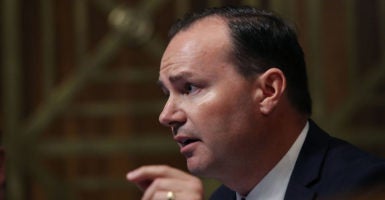 Many federal lawmakers have been looking for ways to help more workers gain access to paid family leave, but the problem with most proposals—from Democrats and Republicans alike—is that they rely on the federal government to manage new paid family leave programs.

Not so with Sen. Mike Lee’s Working Families Flexibility Act, which the Utah Republican reintroduced on April 4.

Without establishing a new federal program, without raising taxes on workers, without imposing mandates on employers, and without hindering the growth in private and state-based paid family leave programs that are already underway, the Working Families Flexibility Act would allow millions of lower-wage workers to accumulate paid family leave.

How would it work?

Essentially, the bill would just eliminate a current regulation that prohibits employees who work in the private sector from choosing between overtime pay and overtime paid time off.

Under current law, workers who are paid hourly (generally those earning less than $23,660 per year) must receive overtime pay at a rate of time-and-a-half if they work more than 40 hours in any week.

So, suppose Tanya, a cashier at the local hardware store, earns $10 an hour and works 20 hours of overtime over the course of a month. Instead of receiving the usual $200 for her 20 hours, she receives $300 because of the overtime rate.

The Working Families Flexibility Act would let Tanya choose between pay or paid time off—in this case, a choice between $300 of pay or 30 hours of paid leave.

Since lower-wage workers are the least likely to have access to paid leave, this bill would go a long way toward increasing paid leave where it’s most needed.

Take the example of Tanya above. Suppose she wants to work overtime this week so that she can take time off next week to attend her son’s soccer game.

Current law prohibits her employer from giving her that choice. Under the Working Families Flexibility Act, Tanya’s employer could let her exchange two hours of overtime one week for three hours of paid time off the next week.

Who would oppose that? Are there any politicians or advocacy groups that don’t want to open doors to more employer-provided paid leave?

The House of Representatives passed the bill (H.R. 1180) in the 115thh Congress, but it was a strictly party-line vote with zero Democrats voting in favor of the measure.

Perhaps that lack of support from Democrats has to do with union opposition. Unions are supposed to look out for workers’ best interests, and it seems that giving workers the opportunity to accrue paid time off is in workers’ best interests. But paid time off instead of pay for overtime hours would mean lower revenues for some unions; specifically, those that collect fees as a percentage of workers’ wages.

Unions that oppose this measure may be doing so putting their own financial interests instead of workers’ best interests.

But it’s not only unions that oppose giving workers more choices. Presumably, those organizations and politicians that oppose the Working Families Flexibility Act think that the government knows what’s best for workers—in this case, they think it’s pay instead of paid time off.

But for many workers, particularly working parents, time is more valuable than money.

Opponents also claim that employers would take advantage of workers and force them to take paid time off instead of paying them for overtime hours. But the bill explicitly prohibits that by providing safeguards to ensure all choices by workers are voluntary, and it requires that workers be able to cash out their accrued comp time at any point during the year if they decide they want pay instead of time off.

Politicians are clamoring for ways to increase access to paid family leave, but they cannot agree on the means through which to do that. Some want a whole new federal program with a separate payroll tax, while others want to use Social Security to provide paid family leave.

For politicians on both sides of the aisle who want to increase workers’ access to paid leave, the Working Families Flexibility Act should be a slam dunk.