Americans Want Paid Leave, Until They Realize They Have to Pay for It 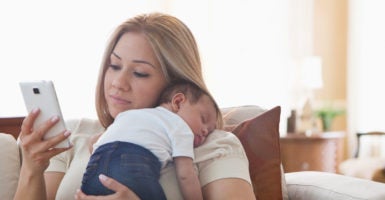 Of those employees who took leave, 75 percent reported receiving either full or partial pay, while 48 percent reported at least some portion of their leave as unpaid. (Photo: KidStock/MNPhotoStudios/Newscom)

Fully 74 percent of Americans say they support a national paid family leave program that would provide workers with 12 weeks of paid leave following the birth or adoption of a child, or to care for their own or a family member’s illness.

But not if they have to pay for it.

That’s according to a new survey from the Cato Institute that asked a representative sample of 1,700 Americans about their views on paid family leave.

Despite overwhelming support for a paid family leave program not counting its costs, support plummeted when it came to paying for such a program.

At a price tag of $450 more in taxes each year—the minimum cost, for a modest program—fewer than half of Americans (48 percent) supported a national paid leave program.

In reality, however, a national paid leave program would cost much more—as much as $11,000 in new taxes, according to the American Action Forum.

Debt was another thing Americans did not want more of in exchange for paid leave. Only 40 percent of Americans supported paid family leave if it meant higher deficits.

Compared with paying higher taxes and more debt, the Cato study found that Americans were less willing to give up their own personal compensation or to forgo promotions for women.

Only 38 percent supported a federal paid leave policy if it meant lower pay raises for them, and even fewer—29 percent—were willing to exchange such a program for fewer benefits for them or for a reduced likelihood of promotions for women.

That has unfortunately been the case with national paid leave programs.

Now is not the time to stifle this growth or to crowd out existing policies with a federal paid leave program.

Instead of a federal program, policymakers can help encourage greater access to paid family leave through policies such as the Working Families Flexibility Act, universal savings accounts, and fewer regulations, which would free up business resources to help employers provide paid family leave.

These are things most Americans support.

Seventy-eight percent of Americans supported allowing workers to save money, tax-free, to use for family or medical leave.

Paid family leave is something Americans want, but not at the cost of a federal program. Policymakers should encourage more employer-provided programs, rather than stifling them with a federal one.