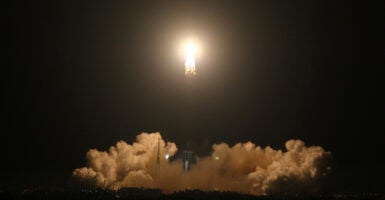 Andrew J. Harding is a student at The George Washington University’s Elliott School of International Affairs and lived in Moscow, Russia, during the 2014 Russo-Ukrainian War.

A what?! Yes, a Chinese fractional orbital bombardment system—armed with a hypersonic glide vehicle.

It was revealed in mid-October that China has conducted two tests of this new strategic weapon system during the summer—a development that should seriously concern U.S. defense and allied officials, along with other recent troubling developments surrounding China’s nuclear weapons programs revealed this year.

The new Chinese strategic weapon system was reportedly boosted into low-Earth orbit by a civilian space launch vehicle. The launch vehicle, carrying the hypersonic glide vehicle, then made a partial circumnavigation of the globe. At a specified point, the hypersonic glide vehicle, which serves as the weapon’s warhead, was released from the “mothership” before deorbiting and entering the Earth’s atmosphere en route to its terrestrial target.

Despite missing its intended target by almost 25 miles, the test appeared to be largely a success.

The fractional orbital bombardment system dates back to a Soviet weapons development program during the Cold War, which intended to launch a nuclear warhead into outer space before raining it down on in its enemies. The program was eventually abandoned in favor of submarine-launched ballistic missiles.

Based on this Soviet concept and improved upon with the addition of a cutting-edge hypersonic glide vehicle, the Chinese fractional orbital bombardment system poses a unique threat:

This all comes on top of news the last few months about other disturbing developments in China’s nuclear posture.

As Dean Cheng, a senior research fellow at The Heritage Foundation, notes, “What is very clear is that China is pushing to develop its nuclear capabilities—its strategic intercontinental capabilities—significantly beyond what has been the case for the last four decades … five decades.”

What is also crystal clear is that China’s unprecedented conventional and nuclear military buildup increasingly threatens U.S. vital national interests—and this fractional orbital bombardment system test serves as the latest in a series of wake-up calls for U.S. policymakers about the political and military challenge presented by the People’s Republic of China.