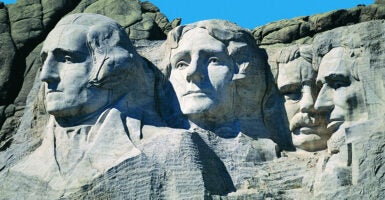 The war on history has come for Thomas Jefferson.

On Monday, the New York City Council unanimously voted to remove a Jefferson statue from New York City Hall, though it hasn’t yet decided where to put it. The statue has been there for nearly a century and was originally created to celebrate religious liberty.

The effort to remove it met no resistance from Mayor Bill de Blasio. In fact, the whole thing was driven by the historical art commission he launched in 2017.

To get an idea of what this commission was about, the tomb of Ulysses S. Grant was under consideration for being labeled a “hate symbol.”

At this suggestion, de Blasio again had nothing to say.

In just a few years we’ve gone from seeing Confederate statues being taken down to Founding Fathers and even Abraham Lincoln becoming ripe for destruction. And this isn’t the end. It was never about the Confederacy.

Jefferson, whatever his personal foibles, was the author of the greatest anti-slavery document in modern history. The Declaration of Independence, which contains the famous line, “We hold these truths to be self-evident that all men are created equal,” not only became a rallying cry to abolish slavery in America. It was an inspiration to anti-slavery movements around the globe.

Today, the institution of slavery has disappeared nearly everywhere, despite being with almost every human civilization through all human history.

Unfortunately, Jefferson is being dragged, literally, from his pedestal by an ungrateful posterity. All to feed the insatiable demands of the militantly woke.

The purge of history will continue until all their enemies are crushed and utopia is achieved. Which is to say, this is a bottomless pit of iconoclasm.

What’s revealing in this latest purge of Jefferson, as what should have been clear already, the monument removals aren’t just about the person depicted in the statue. It’s even more about attacking what they stand for.

The City Council’s black, Latino, and Asian caucus said, according to New York Times Deputy Managing Editor Cliff Levy, that the Jefferson statue “symbolizes the disgusting and racist basis on which America was founded.”

Where could they have gotten that idea? Oh, The New York Times.

The guiding principle of statue destruction that has been put into overdrive in America’s blue cities has never really been about the people depicted. In the protests-turned-riots of 2020, even statues of abolitionists and a black Civil War regiment were attacked.

And it wasn’t just the mob that was so undiscerning.

The San Francisco school district attempted to change the names of countless Bay Area schools, including ones named after George Washington, Abraham Lincoln, John Muir, and countless others.

When asked why these men must come down, the San Francisco school district president couldn’t even really explain herself in a friendly interview. All she was able to come up with was that this was done to address “white supremacy, racism, colonization, ties to slavery, the killing of Indigenous people, or any symbols that embodied that.”

This is apparently all that Washington and Lincoln symbolize.

Statue removal in blue cities has become so common as to be mundane. Whatever whimpers of protest exist are quickly brushed aside to placate the radicals, who mostly get what they want.

Our elite institutions too are eager to join in the crusade to either tear down our history or put insulting trigger warnings on what isn’t outright removed and destroyed.

However, as much as has been purged, the entire movement is an indictment on the mob, the New York City Council, and the country’s ruling cultural elite, not Jefferson and the great men and ideas of our history.

It’s an indictment of the small-minded fanatics who’ve built and accomplished nothing other than tearing down the symbols of greater men, whose accomplishments were profound and transformative.

The only way now to stop this movement is the kind of democratic action that we’ve seen at school board meetings in resistance to critical race theory and other radicalism in the past year.

It’s up to regular people and communities outside the deep blue parts of this country who make up the real majority that still exists in America.

We have to protect and build on our history. When a statue is torn down, build another one in another city in defiance. The only way the war on history ends is when Americans begin to put their foot down and say “no” to the absurd demands.

We need to go out and explain to our friends and neighbors why the ideas and people who built this country were great and worth defending, and why we should look to build on what they accomplished rather than reducing everything to rubble and hoping something good can emerge from the ashes.

The New York City Council may be tearing down statues. It’s our job to now start building more up and furthering the profound and true ideas that Jefferson stood for.