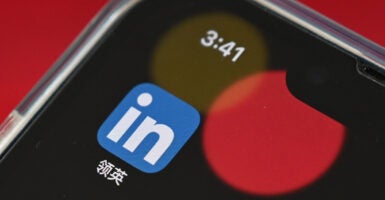 Microsoft said it will shut down the career-oriented social network component of LinkedIn in China, citing a "challenging operating environment" as Beijing tightens its control over tech firms. (Photo: Greg Baker/AFP/Getty Images)

LinkedIn, a wholly owned subsidiary of Microsoft, announced on Thursday a sunset of its localized version of its platform in China that currently has over 50 million users. The platform had recently been criticized for blocking several U.S. journalists for the use of “prohibited content” in light of a crackdown by Chinese authorities earlier this year.

The move will devolve the Chinese platform from a social media service to a straightforward job-seeking platform. It’s an end to an experiment that was likely to manifest itself this way from the beginning.

The incident is the latest example of a Western company testing the waters in China and deciding it’s too cold. At the launch of LinkedIn in China in 2014, the company stated:

Expanding our presence in China presents a challenge that our company must address directly, clearly and in a manner consistent with our core values. As a condition for operating in the country, the government of China imposes censorship requirements on Internet platforms. LinkedIn strongly supports freedom of expression and fundamentally disagrees with government censorship.

At the same time, we also believe that LinkedIn’s absence in China would deny Chinese professionals a means to connect with others on our global platform, thereby limiting the ability of individual Chinese citizens to pursue and realize the economic opportunities, dreams and rights most important to them.

Unfortunately, freedom of expression and good business are not synonymous in China. President Xi Jinping and the regime’s censorship and control of technology is only expanding. From the use of technology to monitor and facilitate genocide against Uyghur Muslims in Xinjiang to the methodical pressure to bring Hong Kong under its control, Xi and the Chinese Communist Party have worked to crush dissent and censor those who seek to criticize the regime or discuss its past, such as the Tiananmen Square massacre.

Crackdowns have also come of late to some of its own emerging technology companies and platforms. Xu Lin, a top official in China’s Central Propaganda Department, said China must “resolutely prohibit dilution of the party’s leadership in the name of convergence … and resolutely guard against risks of capital manipulating public opinion.” This has led to recent crackdowns of Chinese internet browser Alibaba, Tencent, and ByteDance (developer of TikTok).

The message has been clear: Get in line with what the Chinese Communist Party dictates as well as recent year national security law requirements on data privacy, content moderation, and algorithmic uses.

LinkedIn’s experience isn’t unique to China. Autocratic and dictatorial regimes across the globe live and die by the suppression of information and dissent from their citizens. Apple and Google recently removed a tactical voting app supported by Putin opposition leader Alexei Navalny ahead of Russia’s parliamentary elections. This came after threats of fines and reported warnings to prosecute employees from those companies within Moscow after forcing them to station them there to be able to operate.

These decisions and the use of aggressive mechanisms and tactics by these countries against tech companies to comply with their edicts leads to a dangerous and bumpy road ahead. As Sen. Marco Rubio, R-Fla., noted in a critical October letter to the two companies:

By bowing to Moscow’s demand, Google and Apple have both made themselves complicit in the censorship of an oppressive, authoritarian regime … You have set a disturbing precedent for both of your companies, and their peers, one with ramifications for billions of users of your technologies worldwide.

American and Western companies and governments are likely to come to pivotal crossroads in the years ahead on how they view their business and economic decisions in relation to their moral values they preach they work to uphold here at home. Microsoft and LinkedIn made the correct, if not overdue, move at this point.

The ballgame is still up in the air whether American tech companies can strategically make the right decisions in markets dominated by despot regimes who do not believe in the values of openness, free speech, and universal human rights.