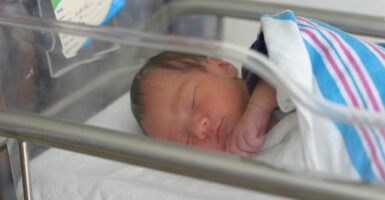 A federal judge temporarily blocked the Texas Heartbeat Act, but the law is still working to protect life as the ruling is being appealed. (Photo: marcos77/Getty Images)

The Texas Heartbeat Act is still working to protect unborn babies, even after a federal judge enjoined the law on Wednesday.

U.S. District Judge Robert Pitman issued a preliminary injunction on the pro-life measure, which prohibits abortion after a baby’s heartbeat is detected, which is usually at six weeks’ gestation.

Under the suspension, Texas state court judges and clerks can’t accept lawsuits filed in alleged violation of the Heartbeat Act. Federal courts, however, still can.

“Under current law, a citizen lawsuit under the Heartbeat law can be brought in the federal court,” Texas Republican state Sen. Bryan Hughes, who authored the bill, told The Daily Signal on Thursday.

The law is also written in such a way that abortion clinics can be held liable in the future for abortions they perform during the bill’s suspension, should a higher court overrule the injunction, he said.

“Under the heartbeat law as as we passed it, it specifically says that if this law is blocked or enjoined by a court, and then that injunction is later reversed, any abortions that were performed during the period the injunction was in effect are illegal, and doctors can still be held accountable for them,” Hughes said.

Most abortion providers in Texas are still complying with the Heartbeat Act because they don’t want to face legal ramifications if the suspension is overturned, the Texas state senator added.

Opponents of the Heartbeat Act are praising the court’s injunction, but appear cautious, as they know the law could be reinstated.

“While this fight is far from over, we are hopeful that the court’s order blocking S.B. 8 will allow Texas abortion providers to resume services as soon as possible,” Alexis McGill Johnson, the president and CEO of Planned Parenthood, said in a statement Thursday.

Less than 24 hours after Pitman, a 2014 appointee of then-President Barack Obama, issued his 113-page ruling, Texas Attorney General Ken Paxton said the state is taking action to appeal the decision.

“We disagree with the Court’s decision and have already taken steps to immediately appeal it to the 5th Circuit Court of Appeals,” Paxton tweeted Thursday.

Hughes says he thinks the 5th Circuit Court will rule on the case fairly quickly and added, “We’re pretty confident that this circuit is going to overrule Judge Pitman and lift that injunction.”

Texas Gov. Greg Abbott signed the bill into law in May, and it officially went into effect Sept. 1.

Texas has been a leading pro-life state for years, both in terms of legislation and of providing practical support to women facing unplanned pregnancies.

Since 2005, Texas has provided expectant mothers and fathers with support and resources through the Alternatives to Abortion program. Texas uses state and federal money to fund the program, which is designed to come “alongside those mothers in difficult situations [and] gives them tangible help, if they decide to keep the baby,” Hughes said.

When the Texas Legislature passed the Heartbeat Act, the state also increased funding to the Alternatives to Abortion program to $100 million for the next two years.

“We do recognize that there is a precious mother and a precious little unborn baby—two human beings,” Hughes said, “and we have to protect both of them.”