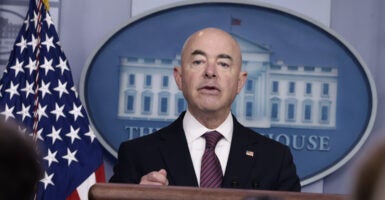 Illegal aliens who commit domestic violence, drive drunk, or are convicted of other crimes may stay in America under the policy outlined by Homeland Security Secretary Alejandro Mayorkas, pictured Sept. 24 speaking to reporters at the White House. (Photo: Anna Moneymaker/Getty Images)

Federal immigration officials no longer will view unlawful entry into the country as the sole basis for detaining and deporting illegal immigrants, under a new Biden administration policy.

The policy will limit deportation to what immigraion officials call aggravated felons, such as violent gang members and others who commit violent crimes.

Critics of President Joe Biden’s new policy as stated by Homeland Security Secretary Alejandro Mayorkas note that it will allow those who commit domestic violence, drunk drivers, and others convicted of crimes to stay in America—amid an ongoing border crisis.

“This is a terrible signal to send to law enforcement officers,” former acting Homeland Security Secretary Chad Wolf told The Daily Signal. “To say [that] simply being here illegally is no longer a criteria for removal is to excuse knowingly breaking the law.”

Wolf, who served in the Trump administration, currently is a visiting fellow on homeland security issues at The Heritage Foundation, parent organization of The Daily Signal.

“This policy serves a political end,” Wolf said. “You can both prioritize and not exempt entire classes of people from law enforcement action.”

Mayorkas issued a Sept. 30 memo that says, in part: “The fact an individual is a removable noncitizen therefore should not alone be the basis of an enforcement action against them.”

The secretary’s memo was sent to leaders of Customs and Border Protection, Immigration and Customs Enforcement, and other agencies in the Department of Homeland Security.

The Mayorkas memo states that the “gravity” of a criminal conviction along with “the nature and degree of harm” involved would be factors for officials to consider before deporting an illegal alien.

When asked for comment on the new policy, the Department of Homeland Security referred The Daily Signal to a previous public statement from Mayorkas. In it, he said:

In exercising this discretion, we are guided by the  knowledge that there are individuals in our country who have been here for generations and contributed to our country’s well-being, including those who have been on the front line in the battle against COVID, lead congregations of faith, and teach our children. As we strive to provide them with a path to [legal] status, we will not work in conflict by spending resources seeking to remove those who do not pose a threat and, in fact, make our nation stronger.

“Under the guise of limited resources and prosecutorial discretion, the net effect is to exempt the vast majority of violating immigration laws,” said Arthur, now a resident fellow in law and policy for the Center for Immigration Studies, which advocates tougher border enforcement.

“The guidelines mean three things. First, the Biden administration is violating most of the Immigration and Naturalization Act,” Arthur said. “Second, this gives a free pass to the majority of criminal aliens in the country. Third, the default position is that if you enter the U.S. illegally, you get to stay permanently.”

Arthur said he also is concerned about a part of the Mayorkas memo regarding domestic violence. That section reads:

The broader public interest is also material in determining whether to take enforcement action. For example, a categorical determination that a domestic violence offense compels apprehension and removal could make victims of domestic violence more reluctant to report the offense conduct. The specific facts of a case should be determinative.

The new policy almost certainly will make it less likely that domestic violence offenders will be removed from the country, Arthur contends.

“This is going to turn the United States into a sanctuary city for domestic violence,” he said.