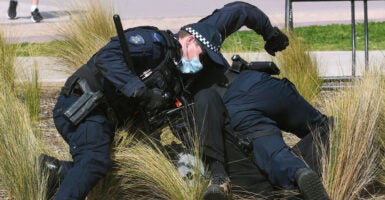 As COVID-19 cases in Australia increased over the past few months due to the delta variant, we’ve seen images of mass protests alongside police and military crackdowns.

The Australian military has been unleashed in Sydney to enforce draconian lockdowns and extreme restrictions on travel. Officials often have unevenly and arbitrarily enforced these restrictions.

John Fund at National Review laid out how absurd things have become Down Under.

“In Victoria, Premier Dan Andrews has promised to ‘lock out’ the unvaccinated from the economy, while New South Wales has made the shot mandatory for public-sector workers,” Fund wrote. “But politicians are exempted, and bans on Australians traveling in or out of their country are routinely waived for athletes, billionaires, and celebrities.”

Of all the countries of the Western world, Australia and New Zealand seemed to embrace COVID-19 lockdowns the most. Of course, being island nations allowed them to isolate more than most other countries.

For a time, this method seemed to pay off. Australia has a much lower infection and death rate from the coronavirus than the United States and many other countries.

But the emergence of the delta variant broke through the tight lockdown, and the number of COVID-19 cases exploded. This is what sent Australia into an even deeper lockdown, and what provoked the protests and then the shocking government crackdown.

As bad as it’s often been here in the United States, some of the restrictions in Australia are almost hard to believe.

When China locked people in their homes at the beginning of the pandemic, it was business as usual. But how can Australia, a country with seemingly so many similarities to America, seem so authoritarian, so much like China?

The reality is that despite similarities, there are some critical differences between Australia and the U.S.

It’s important to note that not all of Australia is under extreme lockdown. Officials in Western Australia took a different course than Eastern Australia, where most of the protests and crackdowns have taken place.

In many ways this is emblematic of the red state-blue state divide in America, where red states remained more open during the pandemic and blue states were more willing to embrace mandates and lockdowns.

Western Australia locked down initially and sealed its borders. It’s back open for business and is recovering economically. But how long will this situation hold out?

The circumstances perhaps highlight why the U.S. hasn’t seen quite the same level of extreme government action as is taking place in Australia and other countries. Although Australia has a federal system, it’s become increasingly more centralized lately, like much of Europe.

Even though federalism as envisioned by the framers of our Constitution increasingly has weakened in America over the past century, we still have a comparatively robust state-based system. Most policies here are set at the state level, even if the national government increasingly cuts into state authority.

Of course, many on the left decry America’s federalist system, and the Biden administration has tried to undermine it—the president’s national vaccine mandate being exhibit A.

Federalism produces its Californias and its Floridas. Although it’s unfortunate that states such as New York, for instance, have kept public schools closed for an absurd length of time, other states have reopened.

It should be no surprise that Florida has seen a surge of new residents move in, though no doubt more than a few have left because they prefer more aggressive lockdowns.

Moving is hard, but might it be worth it if it means that your children finally can go back to school? For many parents, the answer is “yes.”

Australia’s weaker system of federalism means that the whole country might not look like the government crackdowns in Sydney and Melbourne, but it won’t stave off tyranny if current trends continue.

And here we get at the second, more important reason that Australia has become more authoritarian than the U.S. A famous policy split decades ago highlights this growing distinction.

Australia embraced national gun control in the 1990s and implemented the widespread confiscation of firearms. This happened as many Americans became less favorable to more gun control by the government.

Australians chose to embrace government protection while sacrificing their liberty, a liberty that countless Americans see as fundamental and sacred.

It shouldn’t be a surprise that, mere decades later, Australians are even more willing to trade freedom for security, to trust the government to take care of everything. The firearms debate wasn’t just about guns, it was about how citizens saw their role in relation to their government.

More Australians, at least more of those in power, embrace a view of collective security in which rights are simply grants of privilege by state authorities. By contrast, the American view is that rights are God-given and inviolable, except through the due process of law.

The same views about government and the rights of the governed apply to both mass gun control and extreme COVID-19 lockdowns. In both, individual and communal power to make decisions is taken out of the hands of citizens and placed in the hands of government authorities and bureaucrats.

Australia is a warning to America.

Yes, in times of extreme duress, citizens can and must sacrifice some amount of liberty for security. But this contingency comes alongside the fundamental recognition that certain rights must be retained by the people and protected by the government.

Evan Mulholland, director of communications at the Institute of Public Affairs in Australia, explained in a podcast interview with my colleague, Virginia Allen, how liberty-loving Australians began changing.

“Australia has this great reputation of individualism, about pushing back against authority,” Mulholland said. “But what we’ve seen is that a lot of people, particularly last year, less so now, actually liked being told what to do, liked the lockdowns, liked getting through them, but these things don’t happen in a vacuum. As I said, they happen when … the political and cultural elites very slowly pick away at different freedoms.”

Is this not happening in our country too?

Americans shouldn’t be relieved that things are not quite as bad here as they are in Australia, we should be deeply concerned. The same mentality exists among many Americans who would certainly not only take the Australian-style lockdowns but foist them on fellow citizens if they could.

American fear of tyranny, and a healthy degree of federalism, might be what really saves us.