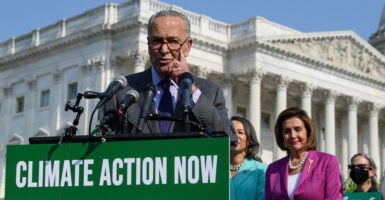 Unprecedented is an understatement to describe what’s happening in Congress right now.

House Speaker Nancy Pelosi, D-Calif., and Senate Majority Leader Chuck Schumer, D-N.Y., are driving Congress to pass a $3.5 trillion spending package to go along with the more than $1 trillion infrastructure bill that passed the Senate in August.

Transparency and debate are all but nonexistent.

As far as energy and environment issues are concerned, the long and short of it is, these bills are the Green New Deal by another name and Congress’ bid to implement President Joe Biden’s Paris climate commitments to halve greenhouse gas emissions by 2030.

Looking at the committee proposals in the House of Representatives, there are five main buckets of policy:

Combined with the infrastructure bill, this includes a $6 billion bailout of existing nuclear power plants, a carbon dioxide reduction mandate on states implemented through the Department of Transportation, and tens of billions of dollars on green energy research and development, commercialization, and federal procurement.

Sen. Ed Markey, D-Mass., said in August that “the Green New Deal is in the DNA of this green budget resolution.”

Additionally, the Biden administration has moved expeditiously to propose new climate regulations in nearly every agency—but particularly from the Environmental Protection Agency, the departments of Energy and Interior, and the Securities and Exchange Commission—to prop up green energy and target nearly every aspect of the oil, gas, and coal industries.

As others have noted, some of these pieces don’t fit logically together into coherent policy and don’t take into account what states and the private sector are already doing.

Complexity is not the friend of transparency, and taxpayers are likely to bear the brunt of it.

For example, it’s possible that a power company with a lot of nuclear power generation could really bring in the bucks with the nuclear energy bailout in Congress’ infrastructure bill, state subsidies for nuclear and renewables (for example, Illinois’ recently passed bailout), and the Clean Electricity Performance Plan payments to meet the net-zero goals many utilities have already voluntarily committed to.

What does this add up to? Assuming Washington can successfully dictate the behavior and choices of Americans as it’s proposing to do, Americans can expect a moderation of global temperatures of 0.04 of a degree Celsius by the end of the century using the Intergovernmental Panel on Climate Change’s assumptions (problematic as they may be) about the nature and pace of global warming.

Setting aside whether you think 0.04 of a degree Celsius is a worthy goal, the cost effectiveness of how Congress is proposing to achieve it through these bills is an issue that even some moderate Democrats are rightly flagging.

That is, just as cost is not an irrelevant strategic factor in acquiring defense assets and new capabilities, cost is not irrelevant when it comes to climate response.

One can look at cost in at least two ways.

First is the dollar amount, which—according to fact sheets from the House Natural Resources Committee and Energy and Commerce Committee—tallies up to roughly $270 billion. Further, the Joint Committee on Taxation estimates the House’s green energy tax policies will lose $235 billion in tax revenues over the next decade.

However, many of the programs that liberals are pushing forward are “temporary,” hiding their true long-term cost.

Just as important are costs in the loss of decision-making power of American families, businesses, and states as the size and scope of the federal government grows.

Along with the administration, Congress is trying to frame and narrow the choices Americans are allowed to make.

For example, there’s nothing wrong with electric vehicles as a choice Americans can make, but federal policies are trying to make it hard to choose anything else.

Instead, robust competition in the marketplace has served Americans well for centuries and driven innovation to newer and better technology.

Right along with free enterprise being a foundational piece of what has made the U.S. a great country to live in is the idea of federalism; namely, that California can run its experiment, Texas can try something else, as can Rhode Island and every other state while they learn from these laboratories of democracy.

But the proposed expansions of the federal government in these bills further destroy that system of diversity within unity.

The left has oversimplified the problems of—and solutions to—climate policies, and is trying to persuade Americans that commitment to living within our fiscal means and holding fast to founding principles must be abandoned. That’s a costly endeavor.