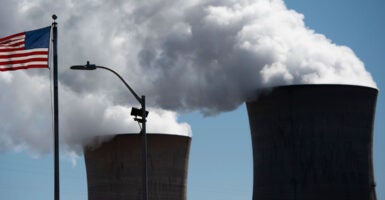 Under a Senate bill, the Department of Education would subsidize nuclear reactors for not emitting air pollutants already regulated by the Environmental Protection Agency. Pictured: Steam rises in March 2019 from the nuclear power plant on Three Mile Island in Middletown, Pennsylvania. (Photo: Andrew Caballero-Reynolds/AFP /Getty Images)

Americans shouldn’t take it if Congress tries to, either.

Noting how politically unpopular the 2018 move was, a draft Senate bill adds a tweak here and there and regifts the bailout to all taxpayers, perhaps hoping they are less likely than power customers to notice a hefty price tag.

The draft legislation—called the Energy Infrastructure Act—is a proposal to reform energy policy that has some promise. For example, the bill would make decent reforms to federal regulations on permitting and environmental review designed to hold agencies accountable to timelines and enable Congress to better track agencies’ progress toward faster reviews and reduced costs.

The trouble is, the legislation also includes duds such as Section 3203, which repackages the nuclear bailout as a credit.

Under the bill, the owner of a nuclear reactor in a competitive electricity market could apply to the Energy Department for subsidies if the agency determines that the reactor is projected to close “due to economic factors” and that “pollutants would increase if the nuclear reactor were to cease operations and be replaced with other types of power generation.”

The Energy Department would create an otherwise undefined bidding process to determine how much to subsidize individual nuclear reactors based on the price per megawatt-hour that each company says it needs to operate for the next four years. The bill immediately would make available $1.2 billion a year for credits from 2022 to 2026.

In short, DOE would subsidize nuclear reactors for not emitting air pollutants already regulated by the Environmental Protection Agency.

What nuclear power company wouldn’t want to find a way to apply for subsidies, particularly when the “economic factors” threatening closure could be due to anything from poor management to bad public policy to tough competition? And for those that are competitive, how is this subsidy program fair?

Credits would be available for four years, although, true to form for energy subsidies, this nuclear credit also would come with the option to apply for credit extensions and asks for “recommendations to renew or expand the credits” once the temporary program makes its last payment in 2031.

Washington knows all too well how to keep “temporary programs” running for decades beyond the original due date.

Interestingly, Illinois’ Legislature last week could not agree on its own bill to expand subsidies for nuclear reactors before its session ended. Illinois is home to more nuclear reactors than any other state. Why should federal taxpayers pay for what Illinois residents apparently don’t want to?

In the bigger picture, top-down measures to protect certain players from competition are fundamentally incompatible with a system designed around the central idea that market competition yields better results for customers, innovation, and the environment.

But this is what the Senate bill does by overriding regional competitive markets with cost-of-service subsidies to certain nuclear reactors and socializing those costs across all federal taxpayers.

The proposed bailout also begs other questions and problems to consider, among them: the costs to Americans; the role of the Federal Energy Regulatory Commission in monitoring competitive electricity markets; the role of states in defining local electricity policy; and the moral hazards of subsidizing companies that may be uncompetitive for a variety of reasons.

Another concern is where the bill may lead. It’s not hard to see how the program could establish the underlying legislative justification for a fundamental reorganization of electricity markets around certain environmental objectives, rather than issues such as reliability, costs and benefits, and customer preferences. Why else subsidize nuclear reactors for not emitting pollutants that the EPA already regulates under the Clean Air Act?

It’s not every day that The Heritage Foundation has something in common with Sen. Ed Markey, D-Mass., who called out a previous version of this nuclear credit for what it is: “just one half of [the DOE’s] attempted bailout of the coal and nuclear industries.”

“This same old plan we see in this bill—payments to keep uneconomic plants on the grid—was opposed by everyone from the NRDC [Natural Resources Defense Council] to The Heritage Foundation,” Markey said.

Although Markey reaches the same conclusion by very different means, he’s right. The proposed nuclear credit program is the gift that keeps on … taking.